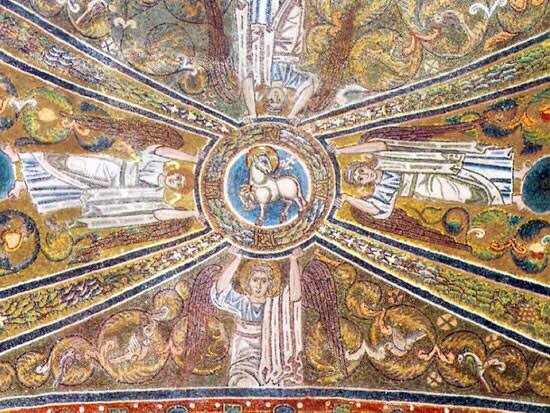 The book of Revelation is currently appearing as the “second reading” in the Revised Common Lectionary. These readings invite us into a world of unfettered imagination, with evocative imagery, enticing language, and disturbing rhetoric. There are a number of visions within the book, each one containing graphic descriptions and dramatic happenings.

The first of these visions sets the scene set for what will later be revealed as a colossal, cosmic battle between good and evil. It opens with the striking claim that the door into heaven is opened (4:1). A disturbing and increasingly detailed dramatization of “what must take place after this” is revealed. The vision comes to a climax with an image of a slaughtered lamb, and this is the passage set in the lectionary this coming Sunday (5:11-14).

Gazing into heaven, the author views a magnificent scene of worship (4:2–5:14). The importance of this scene is signalled by gleaming jewels and a shining rainbow, golden crowns and white robes, thrones and torches of fire, a sea of glass, grumbling thunder and flashes of lightning (4:3–6).

Twenty-four elders and four six-winged creatures sing praises to “one seated on the throne” (4:2–11), and to a slaughtered lamb “with seven horns and seven eyes” (5:1–14). The hymns they sing appear to combine attributes of God which feature in scriptural songs of praise (holy, worthy, glory, honour, power, creator) as well as elements familiar from other New Testament texts in which early Christian thinking is developing.

Jesus is depicted in this book as the supreme authority, the one who has risen from the dead and is at one with God. Yet there is a stark counterpoint running throughout the whole book. Jesus is the one who has been pierced (1:7); perhaps this evokes the piercing of Jesus’ side as he hung on the cross (John 19:34–37, citing this as a fulfillment of Zech 12:10).

In this initial vision, the Lord God Almighty is seated on the throne, surrounded by four six-winged creatures (4:2–11), holding a scroll with seven seals, which no one was able to open (5:1–4). The author then introduces the one who has power to open the scroll: “the Lion of the tribe of Judah, the Root of David” (5:5)—phrases which clearly evoke the Davidic lineage of Jesus which the Gospel writers have so carefully claimed. (The same Davidic lineage is noted at 22:16.) Immediately, this “Lion” is described as a “Lamb standing as if it had been slaughtered” (5:6).

This paradoxical description of Jesus as “the Lamb that was slaughtered” recurs in hymns later in the book (5:9, 13; 13:8). His victory has been won, not through the power of force, but by submission to death. It seems that it is the fact that he has been slain which qualifies him to open the scroll. His power lies in his avoidance of violence, his submission to death.

Followers who maintain purity are linked closely with Jesus in the final scenes. When heaven rejoices at the fall of Babylon, preparations are made for the marriage supper of the Lamb (19:6–8) and it is the servants of the Lamb who are specifically and unequivocally invited (19:9–10).

When the vision of the new Jerusalem is proclaimed, and the Lord God the Almighty and the Lamb stand in place of the temple (21:22), the people who enter are “those who are written in the Lamb’s book of life” (21:27).

Yet the pathway into this heavenly celebration is daunting. The servants of the Lamb, in an earlier vision when the fifth seal is opened, are described as “those who had been slaughtered for the word of God and for the testimony they had given” (6:9).

When Michael slays the dragon and his angels, the victory of the Messiah and his comrades is won “by the blood of the Lamb and by the word of their testimony, for they did not cling to life even in the face of death” (12:11). They must be prepared to be taken into captivity and killed by the sword (13:10). Faithful discipleship requires a willingness to submit to death. This is the way of Jesus, according to Revelation.

This message is reinforced at the end of the laments over the fall of Babylon, in the declaration, “in you was found the blood of prophets and of saints, and of all who have been slaughtered on earth” (18:24). It was those who stood up to the might of Babylon who were killed for their faith.

Here is the key to the situation addressed by this book, and the key to the form of discipleship which it most values. For all its speculative visions, the work is a potent tract of political strategy. Discipleship can mean conflict with Empire. There are sufficient hints throughout that it is failure to offer due worship to the Roman Emperor which has brought persecution and death to the followers of Jesus. The book is both a call to faithful discipleship and a vision of hope in the midst of persecution.