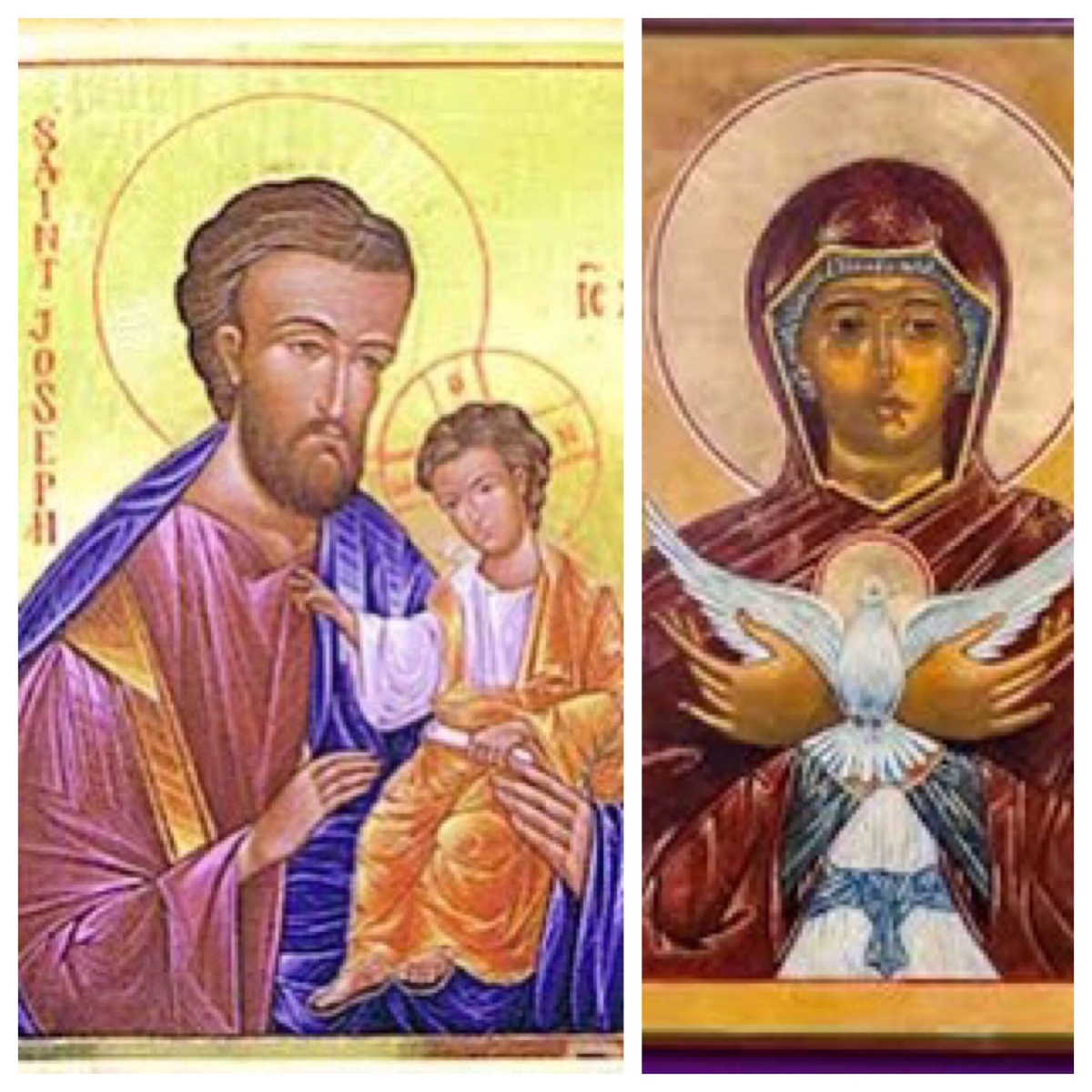 The passages set in the lectionary for this coming Sunday place alongside each other a prophetic oracle spoken by Isaiah, and an angelic announcement delivered to Joseph. The Gospel selection from the book of origins recounts how the birth of Jesus the Messiah took place in this way. The prophetic selection looks to the predicted conception, birth, and naming of a child.

The prophet (Isaiah) was speaking some seven centuries before the time of Jesus, when Judah was ruled by a king. But it was a time when the kingdom was under pressure from stronger forces—the kingdom of Israel to the north, in league with the much stronger empire of Syria.

The angel (unnamed) was speaking to Josephus at a time when the Hebrew people were under Roman rule, after many centuries of foreign domination and oppression. The Assyrians had conquered Israel, in the north, and then the Babylonians had conquered Judah, in the south. In time, the Persians, then the Seleucids, and then the Romans, took control throughout the region.

The centuries of foreign rule took their toll on the national psyche. Hope for a leader from within the people, identified by the prophet, continued on in various forms throughout the period. Some who claimed such leadership met unhappy ends, and led the people into disastrous situations. Hatred of the foreigners grew and remained strong, alongside of persistent hope for the people of Israel.

Thus the author of the book of origins (whom I refer to, following tradition, as Matthew) quotes the prophetic oracle and claims that it has been fulfilled in the angelic announcement. In subsequent verses, he clearly shapes the story of Jesus so that it fulfils scripture at each point along the way. “This took place to fulfil the scriptures” is a common refrain in the chapters that follow (see 1:22, 2:5, 2:17, 3:3, and so on).

Both angel and prophet affirm that child to be born would be a sign to the people, that God was still with them, in the midst of their difficulties. In traditional Hebrew fashion, the name given to the child signals the prophetic understanding of the role of the child. Thus, Emmanuel, meaning “God is with us”, is the name decreed for the child (Isa 7:14).

This prophetic pronouncement is quoted, with intent, in the book of origins (Matt 1:23). The child should be known as Emmanuel. And yet—the name actually given to the child whose birth was announced by the angel is “he saves”. Not, “God is with us”; but, “he saves”. And we know this child by this given name—in Hebrew, Yehoshua, or modified into English, Jesus. Saviour. The one who “will save his people from their sins” (1:21).

As Saviour, then, the child will serve as a signal of God’s enduring presence with the people. Salvation is effected by God and mediated through the child, it would seem.

The announcement reported in Matt 1 is made to Joseph. Not to Mary, as is the case in the orderly account that we know as the Gospel of Luke. In Matthew’s version, the angel speaks directly to Joseph, addressed as “son of David” (1:20). The story comes immediately after recounting a genealogy for the child, made through Joseph, “the husband of Mary, of whom Jesus was born” (1:16).

And the irony of this is that, if we take the literal explanation provided regarding the parentage of Jesus, then Mary is the mother (1:18), but she has had no marital relations with Joseph (1:25). Joseph is not presented as the “natural father”. And the citation of the prophetic oracle is intended to align Mary, the mother, with the virgin who shall conceive (1:23).

Of course, many commentators have noted that there is a translation issue at stake here. (See my post on this at https://johntsquires.com/2019/12/21/a-young-woman-a-virgin-pregnant-about-to-give-birth-isa-714-in-matt-123/)

In Christian tradition, the fathering of the child is attributed to the Holy Spirit, who overshadows the virgin to produce the child (Luke 1:35; Matt 1:18,23). When did that tradition develop? Perhaps it was already known outside of the community of which the author of this book of origins was a part? Certainly, it was later articulated in the orderly account attributed to Luke. Awareness of this claim most likely influenced Matthew to include the prophetic oracle as a foundation for the angelic announcement—he turns to scripture to provide a foundation for his story at many points.

And so the tradition of the virginal conception of Mary arose—leading to the (less accurate) claim about the birth of Jesus having been a Virgin Birth, now strongly cemented in traditional Christian dogma.

But back to the book of origins. Here, we have a child named incorrectly and a lineage traced back to key figures through the apparent non-father. A strange way to start a story!!

And yet, the book of origins is insistent on the Davidic lineage of Jesus—through the line of Joseph. And that is clearly because the covenant with David was an important motif to many groups in Jewish history. God promised that there would always be a descendant of David upon the throne of Israel; by the time that a member of Matthew’s community started to write the book of origins, this had developed into a messianic expectation in certain groups.

Members of the Jewish community in which the book of origins itself originated firmly believed Jesus to be the Messiah. Accordingly, the stress upon the “correct” ‘Davidic’ genealogy of Jesus would have been of particular importance to this predominantly Jewish group, especially one challenging the authority of the Pharisaic Jews of the time. It is probable that this is why Matthew uses the term “son of David” for Jesus much more than the other Gospel writers (1:1, 20; 9:27; 12:24; 15:22; 20:30–31; 21:9, 15, 42).

Matthew’s use of “formula quotations” also provide indications that the life, work and death of Jesus, in its totality, is the fulfilment of prophecy in the Hebrew scriptures, and therefore the expected Messiah.

There are other scripture quotations which are introduced by simpler formulae; for example:

“Isaiah prophesied rightly about you when he said…” (15:7)

Some passages are clearly quoted, but without any introductory formula (for instance, 24:29 and 26:64). Indeed, Hebrew Scripture influences many other parts of the gospel, through allusion and inference as well as through use of selected terminology.

By adding so many of these quotations, Matthew emphasises something about Jesus and what it means to believe in him. Matthew wishes to stress beyond a shadow of a doubt, that Jesus is the chosen one of God and that the community’s belief in him as Messiah is completely justified; this justification can be found in the fulfilment of Hebrew scripture.

Therefore, in keeping with this notion, Matthew’s report of the baptism of Jesus highlights that Jesus is the fulfilment of righteousness. Only Matthew (3:14–15) reports the conversation between Jesus and John the Baptist, in which Jesus states that for John to baptise him “is proper for us in this way to fulfil all righteousness”.

Thus, Jesus begins his public ministry by demonstrating a central theme of this Gospel—that of obedience to the will of God. Not surprisingly, Jesus’ baptism is accompanied by a sign commonly found in scriptural theophanies, that of God’s voice. Jesus is announced as a “beloved son”, pleasing to God (3:17). He is, in this Gospel, not only the son of David, but the son of God.

9 thoughts on “Now the birth of Jesus the Messiah took place in this way (Matthew 1; Advent 4A)”