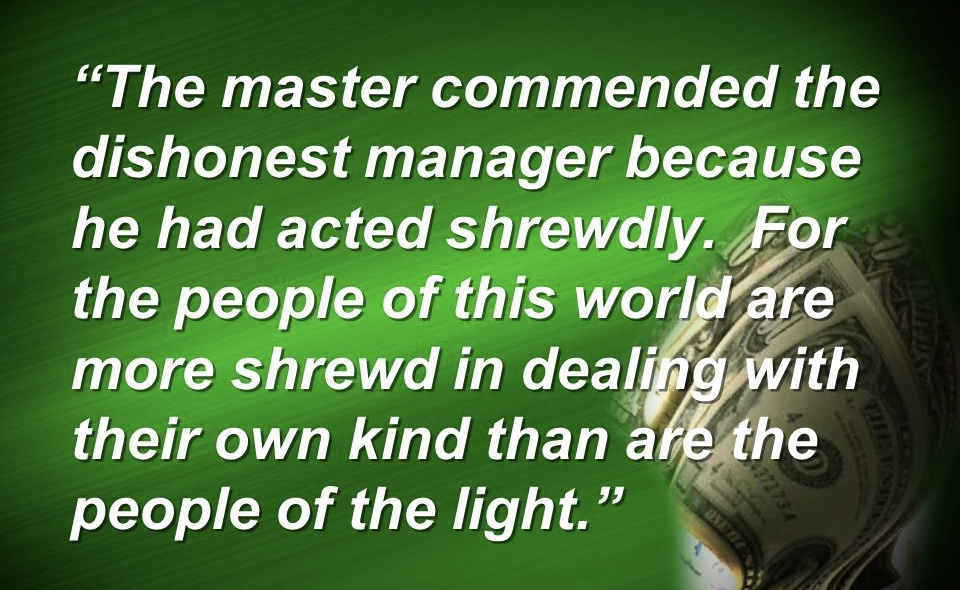 Currently, as we follow the lectionary, we are reading a sequence of parables that Jesus tells in Luke’s orderly account (Luke 15:3–16:31). A key theme for these parables is sounded at the start: “all the tax collectors and sinners were coming near to listen to him, and the Pharisees and the scribes were grumbling and saying, ‘This fellow welcomes sinners and eats with them’” (15:1). That introduction sets the scene for what follows.

In the first two of these parables, the punchline is about “the joy in heaven over one sinner who repents” (15:7, 10), while the third parable concerns a son who confesses to his father, “I have sinned against heaven and before you” (15:18, 21) and whose return is celebrated, for “he was dead and has come to life; he was lost and has been found” (Luke 15:24, 32).

In the fourth parable, a shrewd steward is commended for forgiving debts owed to his master (16:3–7); by contrast, in the fifth parable, the sinful life of “a rich man who was dressed in purple and fine linen and who feasted sumptuously every day” is condemned (16:19, 25). All have to do with sin and forgiveness; in the three “lost-and-found” parables of Luke 14, the grace of the one who welcomes back the lost is highlighted.

What do we make, this week, of the shrewd steward? Amy-Jill Levine describes him as “a picaresque figure, or a conniving, deceiving cheat … who gets what he wants through manipulation” (Luke, p.437).

What do you think? Was he a dishonest intermediary, arranging things to his benefit—and, it should be said, to the benefit of the clients as well? Was he acting as a manipulative manager without his master’s knowledge? or did his actions result in a win-win-win situation for the rich master, his manager, and all the clients—a positive contribution to the common good?

Whilst it is the rich man (16:1) who has overarching responsibility in this story, the key figure in the parable is actually the manager, who is described as an oikonomos (16:1, 3, 8). This, incidentally, is the word that provides the basis for our English term economics. In Greek, it is a compound word, joining together oikos, meaning household, and nomos, meaning organisation or arrangement. Thus, the oikonomos is the person who oversees the organisation and management of the household.

The manager is called to come before his master, the rich man, in what will likely be a confrontation (16:1). The NRSV says that he was “charged” with “squandering his property”; the NIV says he was “was accused of wasting his possessions”. The word translated as “charged” or “accused” is dieblēthē, from the root word diaballō. That translation has the inference of a formal charge being laid against the manager.

However, the word actually means to slander or gossip about someone, so it does not bear the formal sense that either “ charge” or “accuse” has. It seems to indicate that “stories were going around” about the manager. So the rich man was not bringing the manager to report to him because he had heard of malpractice. He is simply responding to some news about his activities—perhaps he wants to get it straight, to hear direct from the manager,rather than rely on the gossip mill.

The manager, however, is described as adikias (16:8). So all,is not rosy, it seems. The a- prefix means the word is a negative; the adjective that follows, dikias, refers to doing things right, keeping the law, being upright and honest. Thus, the manager is portrayed as acting in contradiction to the law, acting in a dishonest or unfair way. The rich man is gearing up to dismiss the manager from his post (16:2). The implication, then, is that something untoward has taken place. But we are not told what this is, other than “squandering his property” (16:1).

The manager is also described as being “shrewd” (16:8). The word used, phronimos, is translated, appropriately, as shrewd. It comes from the verb phroneō, which simply means to think, to use one’s brain. There is no malice involved in this; the manager is simply being intelligent.

The first character in the Bible who was called shrewd was the serpent, in Genesis 3. This creature is called “more shrewd than all other beasts”. Shrewd, of course, is an ambiguous term. On the one hand, it is a virtue the wise should cultivate: “show their anger at once, but the prudent ignore an insult” (Prov 12:16), and “a fool despises a parent’s instruction, but the one who heeds admonition is prudent (Prov 15,5). However, when this capacity is misused, it become wiliness and guile; the same Hebrew word is used to refer to those who are “crafty” (Job 5:12; 15:5), who “act with cunning” (Josh 9:4), or who practise “treachery” (Exod 21:14).

(In the Genesis account, the craftiness or cunning of the serpent is emphasised; he was “more crafty than any other wild animal” (3:1). The Hebrew, however, has a wordplay here; in the previous verse (2:25), Adam and Eve were “naked” (arummim); then (3:1) the serpent is described as “more crafty” (arum, shrewd) than all others. Paul, by contrast, takes a much more negative line, claiming that “as the serpent deceived Eve by his craftiness, so your minds may be corrupted from the simplicity that is in Christ” (2 Cor 11:3).)

So the manager exercises his mind and comes up with a plan of action that pleases his master and save his job, and also pleases the clients who find that their debts have been reduced to a more manageable level (16:3–7). The result is that the rich man commends the manager for being phronimōs—shrewd, or crafty (16:8); and then Jesus goes on to commend this way of acting to his disciples (16:9). The common good, the best for all, comes when the rich man forgoes a portion of what is due to him, meaning that those owing debt are released from some of their burden, and they rejoice.

So the narrator has Jesus spell out a clear way of acting in accord with the course of action taken by the manager (16:10–13). The parable must surely speak to contemporary Western society, where the rich get increasingly more and the poor get less and less. There is no common good in this situation. The message of the parable is one of letting go of possessions and wealth, for the benefit of the common good.

The next verse, then, has a very sharp edge: accusing the Pharisees of being “lovers of money” (16:14) means that they would not actually do what the manager has done, and release their wealth for the common good.

(Incidentally, there is no evidence elsewhere in the New Testament or in ancient Jewish sources that the Pharisees were so inclined. By contrast, a number of interpreters have claimed that it was the Sadducees, working with the priests in the Temple, who profited from an oppressive system that laid heavy burdens on the people. The Pharisees, Josephus observes, lived in the towns and villages with and alongside the people. He wrote that “they live meanly, and despise delicacies in diet; and they follow the contract of reasons” (Antiquities of the Jews, 18.3), so presumably they lived without the ostentation and wealth that Josephus ascribes to the Sadducees.)

Is the steward acting in a way that opposes what is considered right and just? He is described as adikias, the opposite of dikiaos, just, or righteous. This may well be yet another parable or saying in which the perceived ways of adhering to the law is undercut by a deeper “righteousness” that appears “unrighteous” but is actually fundamentally faithful to the demands of God. This correlates with the later parable about the Pharisee and the tax collector (18:9–14), in which the “righteous man” is not the Pharisee, teacher of the law, but the tax collector, allegedly sitting outside the law.

It also links with the story of the rich man (18:18–30) who is instructed to “sell all your possessions”—not just to reduce his holdings by 20% (which is what the steward does). The steward gave just some away, and he gains all. The rich man, sadly, is not able to give any away, and he loses all. And in the famous parable that precedes this passage, the father gives away the inheritance of the younger son to that son, who loses it all; yet the father still has an abundance that enables him to kill the fatted calf and throw a party for all to come (15:11-24).

Jesus is accused of being a wastrel, consorting with sinners (15:1–2). The father gives his inheritance away to the son, and rejoices with a party when he returns (15:22–24). The manager, shrewdly organising the financial affairs of his rich master, works to the benefit of all—the rich master, whose debts will be paid, the clients, whose debts are reduced, and himself, whose position may well be saved by his clever actions—thus ensuring the common good is upheld (16:5–8).

It also links with the story of the rich man (18:18–30) who is instructed to “sell all your possessions”—not just to reduce his holdings by 20% (which is what the steward does). The steward gave just some away, and he gains all. The rich man, sadly, is not able to give any away, and he loses all. And in the famous parable that precedes this passage, the father gives his inheritance away to the son, and rejoices with a party when he returns (15:22–24).

Jesus had previously exhorted wealthy people to invite all manner of people to the feats they host (14:1–24). The manager, shrewdly organising the financial affairs of his rich master, works to the benefit of all, ensuring the common good is upheld (16:5–8). The responsible use of resources is a significant theme in all of these stories. And we will see that theme continue in the parable we read next week (16:19–31).

Thanks to Elizabeth Raine and Andrew Jago for a very stimulating discussion in our weekly Greek class, which provided the basis for this blog!