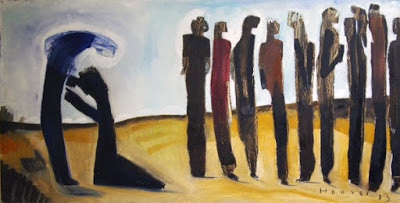 This year, we have been following the story of Jesus as it is offered to us by the author of the orderly account of the things that have been fulfilled among us–the document which we know as the Gospel according to Luke. (see https://johntsquires.wordpress.com/2019/01/31/an-orderly-account-a-quick-guide-to-luke-and-acts/)

This account of the ministry of Jesus gives a prominent place to the journey that Jesus undertook, along with his disciples, from his home region in Galilee, to the capital city of Jerusalem. The journey, in Mark’s Gospel, is all over in just a few verses. You can read about it in Mark 10—and look carefully, it is over pretty quickly!

In Luke’s account, this journey, from Galilee in the north to Jerusalem in the south, starts on chapter 9 and continues right through until chapter 19: that’s 40% of the whole story! The journey gets underway when Luke notes that, at a crucial point during his ministry in Galilee, Jesus sets his face to go to Jerusalem (9:51). This turn of phrase is prophetic term (found often in Ezekiel; see 4:3,7, 6:2, 14:8, 15:7, 21:2, 25:2, 28:21) which indicates his firm commitment to this pathway, but also indicates the judgement that will take place through this visit.

But significantly, the first thing that Jesus does on this journey is gather a larger group of his followers, seventy such disciples (or in some versions, seventy–two), to begin in the role that will later consume their lives. He sends them out to proclaim the central message that the kingdom of God has come near (10:1–12; cf. 9:2).

Quite significantly, when the seventy are sent out, they are in the region of Samaria (9:51-62). The Samaritans were difficult customers; James and John actually wanted Jesus to invoke the wrath of God and consume them (9:54). Jesus, by contrast, refuses to do this (9:55) and charges the seventy to preach a message peace to the Samaritans (10:5) and to declare the good news, that God’s kingdom is right there, in midst of them (10:9,11; cf. 9:2).

It is noteworthy, then, that after chapter 10, the next time that Luke reports an actual location for Jesus and his disciples, is in the passage set for our reading this week, in chapter 17. And that location, strangely enough, is no different from the starting point of the journey. Yes, after seven long chapters of travelling, Jesus and his disciples are still up north: On the way to Jerusalem, Jesus was going through the region between Samaria and Galilee, Luke reports (17:11).

In this story, Jesus heals a group of ten lepers. They, of course, are jubilant at being healed, no longer outcasts, but restored to health and reconnected with family and friends. However, as Luke reports, only one of these ten lepers had the grace, and the gratitude, to return to Jesus and thank him for what he had done to them all.

According to Luke, ‘one of them, when he saw that he was healed, turned back, praising God with a loud voice. He prostrated himself at Jesus’ feet and thanked him. And he was a Samaritan. Then Jesus asked, Were not ten made clean? But the other nine, where are they? Was none of them found to return and give praise to God except this foreigner? (17:15-18).

Only one; and that one, a Samaritan—a member of the despised northern tribe, the people who had long been at loggerheads with their southern neighbours in Judea, as well as with the people in Galilee, from where Jesus and a number of his first followers came.

These two stories, both set in and around Samaria, the enemy territory (as it were), set out some significant aspects of the ministry of Jesus.

On the way, Luke reports on the teachings and healings of Jesus and his encounters and debates with various people. Many of these reports are drawn from a special source that only Luke seemed to know, as well as another source known as ‘Q’, which provides material for both Luke and Matthew. So the journey, over ten chapters in Luke, provides the context for a rich selection of teaching and instruction at depth.

When Jesus sets his face towards the city to bring God’s judgement upon it (Luke 9:51), he knows what the cost will be for himself, personally. He is clear that he must travel with that end in view (13:33). When he enters the city, he comes as the messenger of divine judgement (19:44); the visitation of God is a biblical phrase for executing diving judgement. Along the way, he encounters opposition and criticism.

That started with the Samaritans, at the end of chapter 9, reflected in the antagonistic words of James and John, who wanted Jesus to pronounce judgement on them. At the start of the journey, the relationship is one of opponents. Jews and Samaritans do not get on.

But here, in chapter 17, as the journey has been underway for quite some time, the relationship between Jesus and his followers, and the Samaritans, has been transformed. Indeed, from amongst all ten of those keepers who were healed, only one returned to give thanks—and that one was a Samaritan! And perhaps this one solitary Samaritan might well signal the turnaround in understanding about Jesus.

No longer an opponent. No longer an enemy. Now, a friend. Now, a companion along the way. The turnaround is remarkable.

And yet—let us also remember that, back there are the start of the journey, in the early days, Jesus was already signalling this message. Immediately after the seventy had returned from their mission of proclaiming the kingdom, Jesus engaged in a debate with a scribe, a teacher of the Law. What must I do to inherit eternal life? was the scribe’s question. Love God, and love Neighbour, was the reply from Jesus, drawing directly from the very Law that the scribe knew and taught.

Who is my neighbour? the scribe then asked. And Jesus, typically, replied by telling a story. It’s a story reported only in Luke’s Gospel. Thank goodness for Luke, and for his special sources! It is the story that reveals who the neighbour actually is—yes, the neighbour is a Samaritan. The story is the parable of the Good Samaritan.

So, for Jesus, it is clear, from early in the journey, through until towards the ends of the journey. He reaches out, offering a hand of friendship, inviting a relationship of acceptance, to the traditional enemies—the Samaritans.

And even more strikingly, if we attend to the geography that Luke provides us, all of the journey thus far has been in or around or near to Samaria. Not in Galilee, the home territory of Jesus. Not in Judea, in the area around Jerusalem, the religious centre and economic capital of that region, he has been teaching and healing, preaching and telling parables, amongst the Samaritans—those very outsiders, in the traditional way of viewing things.

This returning, healed leper, was a Samaritan—an outsider, a foreigner, in the traditional understanding of the time. And yet, Jesus not only heals him, but commends him: your faith has made you well, he says to the Samaritan—as he had earlier said to the sinful woman who anointed his feet (7:50), and the haemmhoraging woman who touched the fringe of his clothes (8:48), and as he will subsequently say to the persistent widow (18:8) and the blind beggar outside Jericho (18:48), just before he finally enters Jerusalem.

And these figures, all outcasts because of their circumstances, were welcomed and affirmed by Jesus. They are the great examples of faith, in this Gospel! They are the ones whom he praises! Jesus demonstrates a gracious openness to those whom society regarded as unclean, despised, outcast.

So Naaman and Cornelius stand, with the anonymous Samaritan leper, as key signals for this central truth in the message and the practice of Jesus: Grace is offered openly, abundantly, to those who would be regarded by tradition as being beyond the pale. The Gospel, the good news, the message of the kingdom of God, is a message that opens out, that stretches out to reach beyond the traditional limitations of understanding, with an invitation shaped by gracious openness.

One thought on “Was none of them found to return and give praise to God except this foreigner? (Luke 17)”