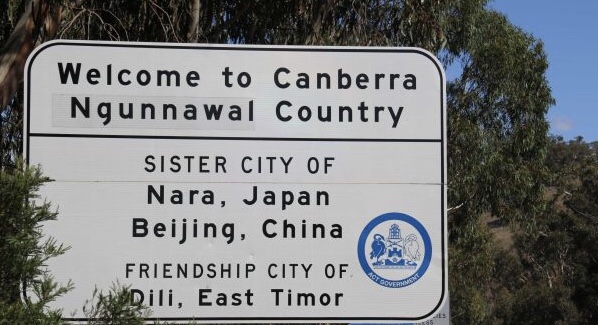 So, now we are here in the Australian Capital Territory, to take up new opportunities in ministry. We live in a suburb named after an early Australian poet (Adam Lindsay Gordon), on a street named after an obscure Victorian racehorse trainer (Michael Holt). That strikes me as a curious juxtaposition, indeed.

A number, however, are obscure figures like Lewis Luxton (born in Australia—but he rowed for Great Britain in the 1932 Olympics), Clare Dennis (a swimmer who won gold at those same 1932 Olympics), Noel Ryan (another 1930s swimmer) and Fred Lane, whose name graces the intriguingly-named Fred Lane Crescent. (Fred was a swimmer in the early 1900s.)

But the region in which we live is named Tuggeranong—a word derived from one of the indigenous groups who lived in the area, the Toogoranoongh. And we live in a city named Canberra, quite possibly drawing on an indigenous word (Koyanberra, or Kanberri, or perhaps Gamberri) which means “meeting place”. Which is what it is today. It is the place where, in contemporary Australia, lawmakers from across the country gather on a regular basis to meet in parliament.

One website informs me that “the Canberra region is generally understood to have been a meeting place for different Aboriginal clans, suggesting that there was a reliable food and water supply.  To access areas of significance such as Mt Majura and Mt Ainslie, Black Mountain and the major meeting ground at the current site of Parliament House, significant pathways were formed as people moved from place to place through transitional cultural boundaries following river and creek corridors and the ridges and spurs of hills and mountains.”

There are a number of groups from the First People who are linked with this particular area. That makes sense, if it was, indeed, an ancient meeting place for various groups of people. However, we have learnt that there is disputation and disagreement about which precise group, in earlier times, comprised the traditional custodians of this region. This is contested land.

Some say it is Ngunnawal land—indeed, 16 years ago, the local government body determined that this was the group that had cared for all the lands on which Canberra, and the ACT, now stand. In 2002, the Chief Minister of the ACT, Jon Stanhope, stated “The ACT Government recognises that there are questions and disputes about traditional Aboriginal identity for the ACT and surrounding region. Establishing traditional identity is a complex and sensitive matter. There is as yet no definitive academic consensus on traditional Aboriginal languages or clan groups associated with the ACT and surrounding region.” Yet, since then, the government has affirmed the Ngunnawal as the traditional custodians of the area. The sign welcoming travellers into the area clearly announces this: Welcome to Canberra. Ngunnawal Country.

Yet the dispute about the identity of the traditional peoples continues today. Others claim that the southern part of Canberra and the lands stretching to the south and east onto the Monaro Plateau was Ngarigo land. Yet another claim is that the land is Namadji land, referring to the area which stretches to the west of the city and which bears that name in a national park.

One of the most poignant things I have read is an explanation as to why we, today, are faced with this uncertainty about the identity of the original inhabitants of the area, and why there is dispute as to this matter. The explanation given is, “In the ACT, and around the country, many Aboriginal people were forcibly removed from their land by the Government in the 1900s … the shockwaves caused by Government assimilation policies were still being felt today, and confusion and disputes about traditional ownership were a consequence.” (https://www.abc.net.au/news/specials/curious-canberra/2016-04-04/curious-canberra-what-is-the-aboriginal-history-of-canberra/7286124)

So the very policies of white society have led to ongoing dislocation and uncertainty amongst the First Peoples. Pushing to have this clarified can reinforce the initial trauma that was experienced by removal and attempted assimilation.

Indeed, as one elder has said, “You’re asking a group of people who’ve been severely traumatised by war and genocide for 200 years, to sit down at a table and do something under a white law that’s completely alien in a way. We don’t get to sit around in our circles working collaboratively or working cooperatively together. It sets one group against another, so it actually makes it really hard. It happens everywhere and sometimes people have to withdraw from native title talks because they can’t bear the way it feels … it becomes a really structurally violent place to be for a lot of people.” (quoted in the same ABC article noted above)

That’s a sad indictment on our society, even today.

Meanwhile, I am learning about the indigenous names which continue to identify localities in the region, in each case referencing the traditional inhabitants over the millennia. Some key names link with the seven clans who are believed to have lived in specific locations. The Maloongoola lived in the Molongolo area, the Biyaligee, in the area of Pialligo, the Namitch lived in the area we know as Namadgi, the Cumbeyan lived in the Queanbeyan area, the Kanberri lived in the Belconnen area, the Toogoranoongh lived in Tuggeranong (where we are now residing), and the Yarr lived in the Yass area. These names honour the original inhabitants.

5 thoughts on “Learning of the land (2): Ngunnawal, Namadgi and Ngarigo”