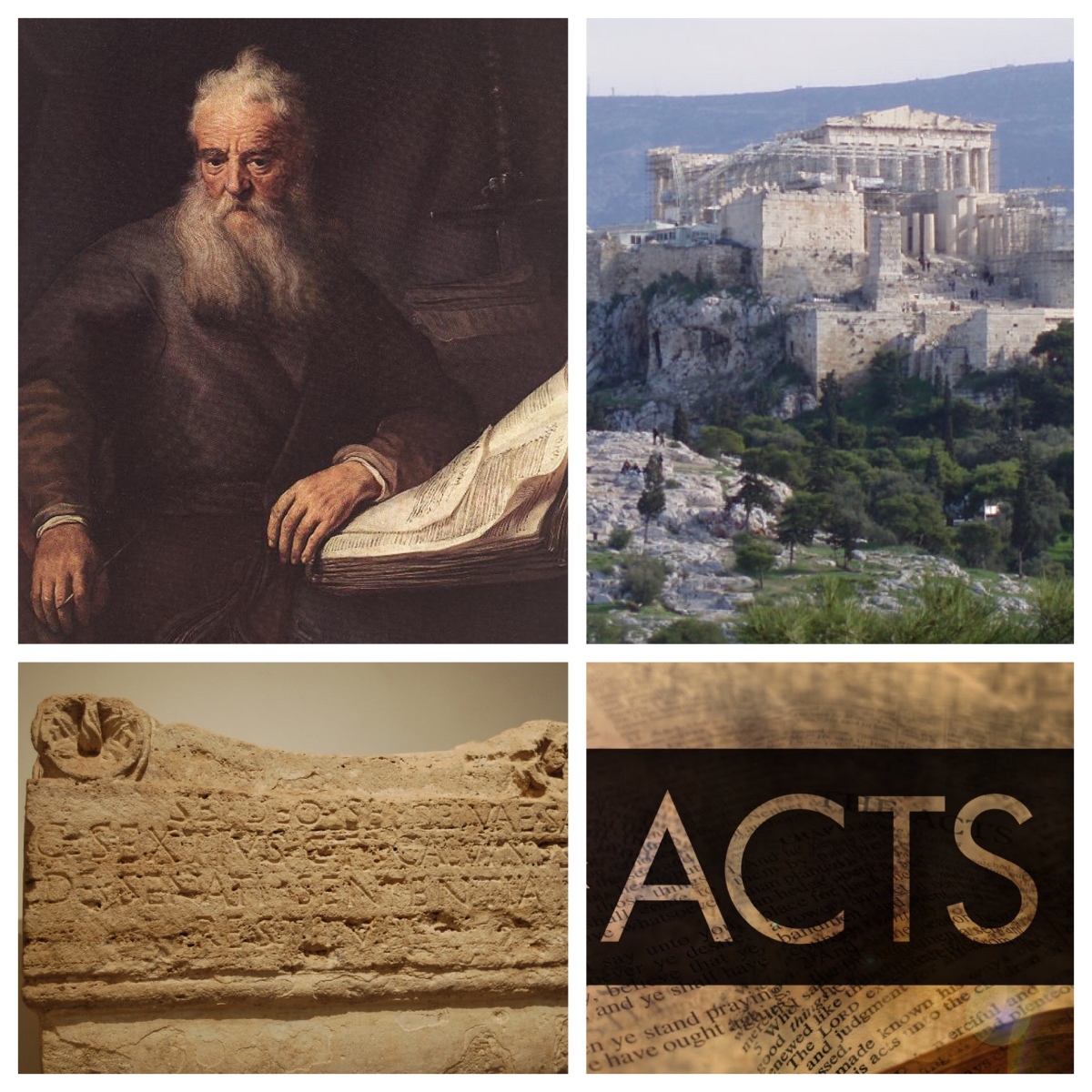 This Sunday (the sixth Sunday in the season of Easter) the lectionary offers us Luke’s account of Paul’s speech on the Areopagus. This famous speech represents a key moment in the story of the early Jesus movement. Many speeches before it in Acts have been delivered to Jews and Godfearers, gathered in synagogues. Now, by contrast, Paul stands before Gentiles—although his listeners initially thought that he was something of a “babbler”, telling frivolous novelties.

In this speech, Paul seeks to convince the Athenians of his beliefs—he is engaged in the task of apologetics—expounding, explaining, and defending his beliefs to others. The speech is, of course, a thoroughly Lukan creation, which most likely owes its shape to the development of preaching in Hellenistic Judaism. (We have various examples in works from the centuries or two before, and after, Paul.)

As Paul attempts to persuade his audience, he seeks to move them from what they can agree upon to what he wishes them to believe; this is the nature of apologetic preaching. He presents as thoughtful, relevant, respectful, and persuasive—an excellent role model for contemporary preachers!

Paul quotes, not from his own Jewish scripture, as he usually did in synagogues; he begins with a reference to the “altar to an unknown God” (17:23) and later refers to “your own poets” (17:28). That is a key apologetic move; contextualise your words, start with what is known to be in common between speaker and audience.

Indeed, the argument of this speech is thoroughly connected with the audience, drawn from the two leading schools of Epicurus and the Stoics (17:18). Paul declares his belief in the providential care of God for all humanity. Stoics and Epicureans held strongly opposing views on the question of divine providence: the Stoics exalted fate as pre-eminent, whilst the Epicureans dismissed it as an illusion. Luke’s apologetic strategy has Paul pitch his speech on the basis of the Stoic view.

There are three substantive claims made in this speech: first, that God relates to humanity through creation (17:24-26); second, that humanity searches for God and finds fulfilment by dwelling in the divine being (17:27-28); and then, third, that we can know directly by the way that God relates to us through Jesus (17:29-31).

Paul’s polemic against idols (17:24, 29) repeats a motif already sounded in Stephen’s speech (7:48); the theme would have been familiar to the philosophers (Heraclitus, Ep. 4; Seneca, Ep. 95.48). This is another indication of the calculated apologetic strategy that Luke attributes to Paul in this speech.

The final reported sentence in the speech adds to this a reference to God’s eschatological judgement, that time when he will establish a day for judgement (17:31). This is a transformation of Peter’s earlier assertion concerning the final days (3:19-21,26). Such judgement will be on the basis of righteousness, a term used infrequently by the Lukan Paul (13:10, 38-39; 24:25), although it is so important in some of Paul’s letters.

Reference to Jesus in this speech is truncated to the abrupt “man whom he chose” who will execute judgement on that day (17:31). Jesus is not even identified by name! In previous speeches, God has related to humanity through events in the history of Israel (Paul, 13:17-22; see also Stephen’s speech, 7:1-53) but pre-eminently through Jesus (see 2:22-36 and 13:23-39). In Paul’s Areopagus speech, God’s relationship to humanity is described, without reference to Jesus, in terms of God’s creative and systematising activity (17:24-26), humanity’s quest for God (17:27), and the consequent indwelling of human beings in the divine being (17:28).

The speech is radically different from earlier speeches in Acts, in two ways: God’s presence is described in philosophical rather than historical terms, and the texts cited to support the argument are drawn from Greek writers rather than the Jewish scriptures. “Your own poets” (17:28) introduces a quotation from Aratus (Phaenom. 5, cited by Eusebius, Prep. Evang. 666b) whilst there are affinities with Stoic writers in the clause “in him we live and move and have our being” (Dio Chrysostom, Or. 12.27-28).

The claim about the antiquity of the beliefs which Paul articulates has been a consistent element in his previous speeches in Acts, although it is usually couched in terms of the fulfilment of prophecy because of his Jewish audiences (see 13:33-37).

However, this speech still has features in common with the earlier speeches of Acts — for each speech interprets human existence in terms of being in relation to God, whether that be expressed in Jewish terms or hellenistic terms. Paul’s Areopagus speech is thus a notable variant of the established pattern — yet it must be regarded as nothing more than a variant, since it still uses language about God to shape the message.

The response to Paul’s speech in Athens follows the pattern seen throughout Paul’s journeys to this point, namely, a divided response of acceptance and rejection (see 13:4-12). A subtle difference here is the reversal of order; rather than first noting those who show interest in Paul’s message, Luke draws attention to those who mocked (17:32a), before providing more details concerning those who sought to know more (17:32b) and those individuals—Dionysius, Damaris, and others unnamed—who believed (17:34).

Some scholars note the distinctive nature of this speech, and the rejection by some, and consider that it therefore indicates Paul’s failure in Athens. This, they maintain, led to a new missionary strategy which is articulated in 1 Corinthians. They cite 1 Cor 2:1-2, “I did not come proclaiming the mystery of God to you in lofty words or wisdom … I decided to know nothing among you except Jesus Christ, and him crucified” as an expression of Paul’s rejection of philosophical argumentation, as we see in the Areopagus speech.

I don’t agree. Rather, this account emphasises Paul’s success in the cultural capital of Greece. That’s why Luke has crafted this scene so carefully. Athens was an important intellectual centre. The Gospel now has a foothold in the wider hellenised world. It is clearly reaching out beyond Judaism. Paul continues on his way to Rome (28:14), and thus enables the good news to reach to “the ends of the earth” (1:8).

This blog is based on a section of my commentary on Acts in the Eerdmans Commentary on the Bible, ed. Dunn and Rogerson (Eerdmans, 2003).

For a fine reflective prayer on this passage by Sarah Agnew, see http://praythestory.blogspot.com/2020/05/to-god-we-do-not-know.html