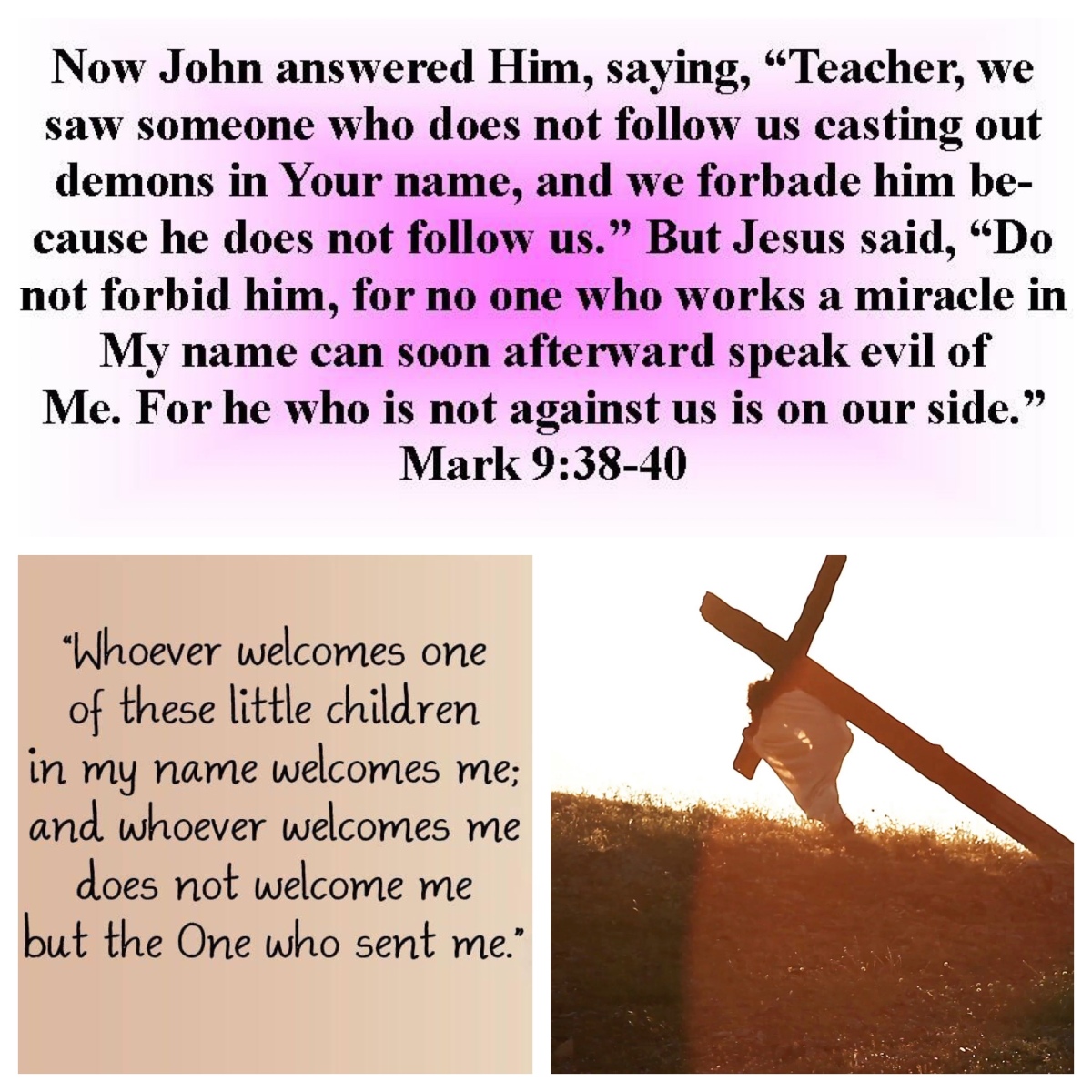 Two weeks ago, we read and heard the passage where Jesus berated Peter: “Get behind me, Satan! For you are setting your mind not on divine things but on human things” (8:33). Jesus went on to teach about the need for those who follow him to take up their cross and lay down their lives (8:34–37). The hubris that Peter demonstrated, when he rebuked Jesus for what he was teaching, is met head-on by Jesus. He rebukes Peter for his focus on “human things”.

The nature of those “human things” is made clear in the passage that we read and heard last Sunday. “What were you arguing about on the way?”, Jesus asks his followers (9:33). No answer comes; those followers of Jesus were shamed into silence “for on the way they had argued with one another who was the greatest” (9:34). Arguing about who is the greatest is a clear manifestation of a focus on “human things”. It’s what human beings do, all too often–we see it demonstrated in our politics, in domestic violence, in sexual assaults, and in the constant stream of uprisings, civil wars, and international wars that are never-ending.

Jesus has been with his followers since the start of his public campaign in Galilee (1:14). By this point in his time with these followers, Jesus no time left for such matters. He teaches them here, as he has already done in the previous passage, about what lies in store for himself as he heads towards Jerusalem—betrayal, and death (9:31; see also 8:31). These are the heart of the “divine things” that he has encouraged his followers to set their minds on. Jesus is resolutely fixed on what is important to God, not what is the focus of humans.

The story we read and heard this coming Sunday (9:38–50) contains further insights into this distinction. The disciples want to exercise their authority by forbidding an unknown person from casting out demons from those possessed by them. “We tried to stop him, because he was not following us”, the disciples report (9:38), expecting to be congratulated by Jesus. (Did you notice the pronoun: following US!!)

But their expectations fall flat. Jesus, once again, rebukes his followers: “Do not stop him; for no one who does a deed of power in my name will be able soon afterward to speak evil of me” (9:39).

Such manifestation of authority will receive a further rebuke from Jesus yet again, at a later point in the story that is being told in this Gospel. Returning to the theme of authority, two of his followers petition Jesus: “Grant us to sit, one at your right hand and one at your left, in your glory” (10:37). Jesus gives them short shrift: “You do not know what you are asking” (10:38). By this time, surely, he must have been seething with frustration—will they never understand? “Do you not understand?” Is a question that Jesus has already posed to his followers, no less than four times previously (4:13; 7:18; 8:17; 8:21).

Three times, in chapters 8–10, Jesus rebukes his followers. Three times, they have acted in ways that indicate their fixation is on authority, prestige, power. Three times, Jesus has responded with a clear explanation. Each time, as they journey southwards towards Jerusalem, he recounts what will take place to “the Son of Man”; a prophetic circumlocution for describing oneself (Ezek 2:1, 3, 6, 8, 3:1, 3, 4, 10, etc). Each time, the fundamental purpose of his mission is explained in short, staccato phrases.

That purpose, and the fate that lies in store for Jesus in Jerusalem, is that he will “undergo great suffering, and be rejected … and be killed” (8:31); there, he “is to be betrayed into human hands, and they will kill him” (9:31); there, he will be “condemned to death; handed over to Gentiles; they will mock him, and spit upon him, and flog him, and kill him” (10:33–34). The end in view is surely sobering, cautionary, worrying, for those who follow with him. Yet each time, they revert to a focus on authority—“human things”.

This threefold description of the imminent fate of Jesus, increasing in detail at each restatement, provides an intense focus on the journey ahead. Jesus will arrive in Jerusalem (11:11) with a cohort of followers who have repeatedly failed to understand that, instead of a focus on their own authority, leading to a seat in glory, they are in company with the one who will take up his cross (8:34), lose his life (8:35), “be last of all and servant of all” (9:35), and ultimately be the slave of all (10:44). “For the Son of Man came not to be served but to serve, and to give his life a ransom for many” (10:45).

This final, definitive affirmation of his role comes after the three instances of the misguided orientation of his followers, and the three corrective teachings offered by Jesus (8:31; 9:31; 10:32–34). This sequence is surrounded by two stories of healing, symbolising the need for the followers of Jesus to open their eyes and see the reality of Jesus. In Bethsaida, a blind man seeks healing from Jesus (8:22–26). In Jericho, blind Bartimaeus cries out to Jesus for mercy (10: 46–52). The two healings clearly symbolise the need for the followers of Jesus themselves to open their eyes to see Jesus.

Despite their physical blindness, these two men have a deeper sense of the presence of Jesus as he passes by, and reach out in hope. Yet those travelling along with Jesus are impervious to what he offers, and blind to the fate that Jesus is walking towards. The irony, the penetrating incongruity, of these juxtapositions, is searing.

It is within this context that the story of the unidentified exorcist (9:38–41) is to be understood. Indeed, the sense of irony is clearly present in this story. The ministry of Jesus has incorporated the casting out of demons alongside his teaching, preaching, and healing. “Proclaiming the message and casting out demons” is how the activities of Jesus have been characterised from the start of his public activity (1:39).

In fact, the casting out of demons was integral to the charge that Jesus had given his followers earlier in their time with him: “he appointed twelve…to be with him and to be sent out to proclaim the message and to have authority to cast out demons” (3:14–15). And these very activities had formed the basis for the mission of the twelve as it is reported at 6:7–13. They model their words and deeds on Jesus: “they proclaimed that all should repent … they cast out many demons and anointed with oil many who were sick and cured them” (6:12–13).

So there may be some sense of self-assured certainty when they report to Jesus that “we saw someone casting out demons in your name, and we tried to stop him, because he was not following us” (9:38). (Yes—notice the pronoun: following US! Not Jesus—but US.) But were they not aware that Jesus was not interested in this claim to authoritative ownership of the franchise of “casting out demons”? The irony, surely, is that Jesus is more interested in the wellbeing of the person possessed, than in the delegated authority of his followers as the ones who should rightly cast out the demon.

Those following Jesus have heard his teachings explaining that his focus is on the cross, losing your life, becoming a servant, drinking the cup of suffering, and being the servant of all who “gives his life as a ransom for many” (10:45). Yet they have not understood. “Whoever wants to be first must be last of all and servant of all”, he has just informed them (9:35). Yet they act as if they can continue to be first, lord over all. So again he will need to underscore his views: “whoever wishes to become great among you must be your servant” (10:43), “whoever wishes to be first among you must be slave of all” (10:44).

The irony is intensified by the placement of this incident involving the unidentified exorcist immediately after the previous parable-in-action, in which Jesus took a child into his arms, and declared, “whoever welcomes one such child in my name welcomes me, and whoever welcomes me welcomes not me but the one who sent me” (9:37). A child was a person with no authority, no status, no prestige or power; yet the low-status, not-important child is the exemplar, not only of Jesus, but of God, “the one who sent me”.

(**Caution: Do not try this at home. Do not take these words literally. But learn the lesson that they teach.)

In this passage, as we hear it this Sunday, the irony is intense. It is the child, the little one, the unidentified exorcist, who has priority, in the eyes of Jesus, ahead of those who seek authority, status, power, glory. The challenge is clear. The word is proclaimed. The Gospel is enacted. The way of the cross awaits …