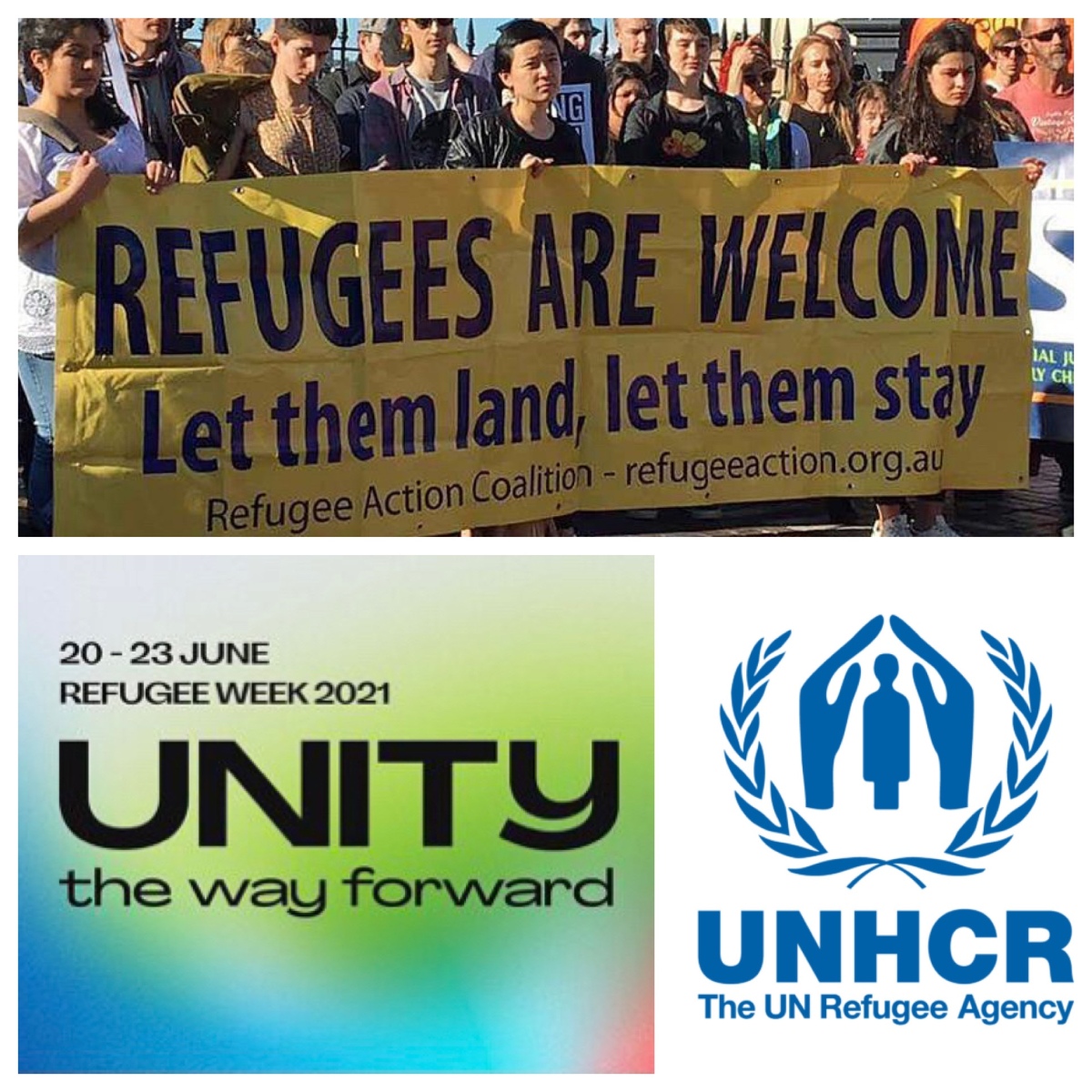 Today, 20 June, is World Refugee Day. On this day, people around the world celebrate the strength, courage and perseverance of millions of refugees. It stands at the beginning of Refugee Week; in Australia, this is always held from Sunday to Saturday of the week which includes 20 June (World Refugee Day).

The first Refugee Week events were organised in Sydney in 1986 by Austcare (Australians Caring for Refugees). Austcare’s mission is to assist refugees overseas, displaced people and those affected by landmines to rebuild their lives, through the expert delivery of development programs in partnership with local communitities and other agencies.

In 1987, the Refugee Council of Australia (RCOA) became a co-organiser of the week, and the week became a national event from 1988. RCOA took on responsibility for the national coordination of Refugee Week from 2004.

The UNHCR (United Nations High Commissioner for Refugees) was established in 1951, when it was estimated that there were just 1.5 million refugees around the world. The UNHCR has most recently estimated that during 2020, for the first time in recorded history, the number of people forcibly displaced had reached over 80 million.

According to the UNHCR, there are now 82.4 million forcibly displaced people, as a result of persecution, conflict, violence, human rights violations or events seriously disturbing public order in their countries of origin. 35 million of these people are children, aged under 18 years. 1 million of these children were born as refugees; in the years 2018 to 2020, an average of between 290,000 and 340,000 children were born into a refugee life per year.

Over half of these people (48 million) are classified as “internally displaced”, meaning that they are homeless within their own country. About 26 million are officially classified as refugees, meaning that they are “unable or unwilling to return to their country of origin owing to a well-founded fear of being persecuted for reasons of race, religion, nationality, membership of a particular social group, or political opinion.” This is the definition in the Convention and Protocol Relating to the Status of Refugees—an international agreement which Australia signed in 1951, the year it was published.

A further 4.1 million people are classified as asylum seekers. Under Article 14 of the 1948 Universal Declaration of Human Rights, everyone has the right to seek asylum The 1951 Refugee Convention prohibits states from imposing penalties on those entering ‘illegally’ who come directly from a territory where their life or freedom is threatened. (Terms such as ‘illegals’, ‘queue jumpers’ and ‘boat people’ are both inaccurate and unhelpful—even though they appear in the media with saddening regularity, they are terms that should be avoided.)

An analysis by the New Internationalist magazine reveals the inequities in how refugees are distributed around the world:

Between January 2009 and December 2018, Australia recognised or resettled 180,790 refugees. This represented 0.89% of the 20.3 million refugees recognised globally over that period. Australia’s total contribution for the decade is ranked 25th overall, 29th per capita and 54th relative to national GDP. It is clear that, as a wealthy and robust country, we can do much better than this.

Some years ago, the Australian Human Rights Commission provided information on the number of refugees in Australia, and on various issues relating to refugees, as this graphic shows:

Christians have a particular responsibility to welcome refugees and assist them to become fully functioning members of society. This responsibility reaches back well into the origins of the mother religion of Christianity, the faith of the people of ancient Israel.

In the Hebrew Scriptures, God charged the people of Israel with providing special care for the “ aliens in the land”, foreigners residing in Israel (see Deut 10:18, 14:28–29). There were specific provisions that “sojourner in the land” were to be accorded the justice due to all Israelites (Exod 22:21–24) and they were to be included in two of the major festive celebrations each year—the Feast of Weeks and the Feast of Booths (Deut 16:11, 14).

In the Gospels, Jesus tells the parable of the sheep and the goats and indicates that “whenever you welcome the stranger, shelter the homeless, feed the hungry, and give a drink to the thirsty … you did it to me” (Matt 25:35–40). See https://johntsquires.com/2020/11/16/a-final-parable-from-the-book-of-origins-on-sheep-and-goats-on-judgement-and-righteous-justice-matt-25/

The Uniting Church has had a long commitment to refugee issues, advocating for the rights of asylum seekers and refugees, and working on the ground to welcome and support refugees as they start to live within Australian society. In 2003, the National Assembly resolved:

a) to note the important call of the gospel to welcome the stranger;

b) to commend and celebrate the work of those within the Uniting Church and wider community who work with refugees and asylum seekers as they commence resettlement within Australia;

c) to celebrate the work which has been undertaken by the NCCA National Program for Refugees and Displaced Persons over many years and for the creation in late 1998 of an ecumenical committee to support this work;

d) to commit the Uniting Church in Australia to ongoing support for refugee and asylum seeker resettlement in Australia.

A major resource on working with refugees, Shelter from the Storm, was adopted at the 2015 Assembly; see https://www.unitingjustice.org.au/refugees-and-asylum-seekers/uca-statements/item/download/893_ba4816ebfb6adadd1c721150aa8f9ccb

In explaining the 2021 theme of UNITY, the Refugee Council of Australia says:

“The volatility of life in recent times has shown us unequivocally that we need to work together often merely to survive, let alone to thrive and progress. Let’s take the opportunity to start afresh and rebuild our lives together. To count our blessings and to put them to work. Existing and emerging communities. Working together. The powerful potential of Unity. The special brew of ideas from all over the world that created our great way of life can continue evolving if we work together. Let’s not stop now, let’s move forward unified.

“In 2021, we are calling on you to help build a more cohesive community during Refugee Week. Whether hosting a local meal, a community event or attending an online event to hear from people all over the world, join us as we call for the spirit of unity as we recover from the isolation we have all endured in 2020. Stronger. Safer. Healthier. Happier. Together.”