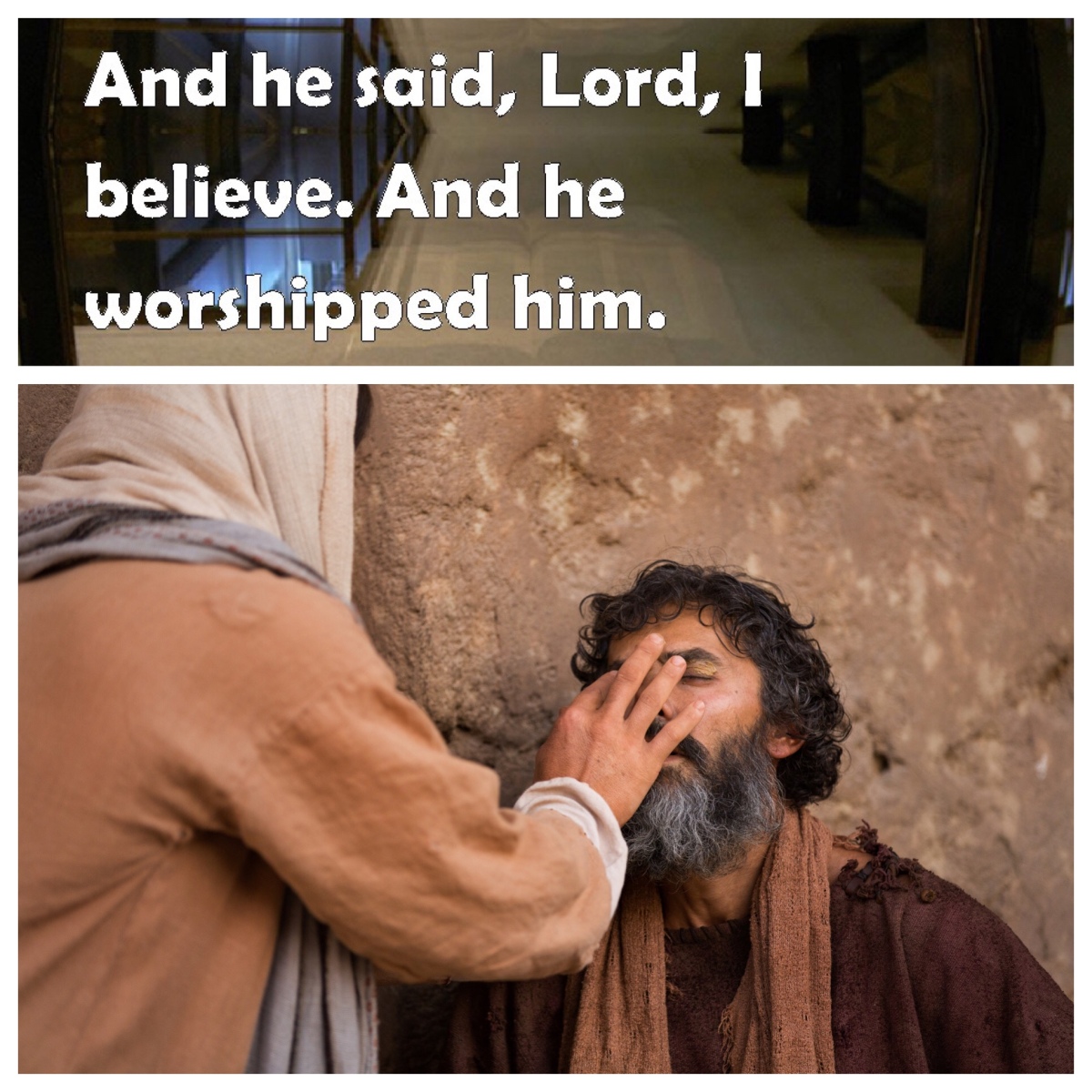 So said the man born blind, whom Jesus encountered, and healed, in Jerusalem (John 9:1-41).

What causes this man to make his bold public confession of faith in Jesus? The book of signs recounts the way that his turnaround took place, when he encountered Jesus. The disciples of Jesus want to quibble about the cause of his blindness: was he a sinner? was he being punished for the sin of his parents? (9:2).

Jesus, however, is not diverted by this theological consideration; he moves quickly and directly to heal the man (9:3-7). It is this healing which leads him to confess faith in Jesus.

In so doing, he stands in the most unlikely company, amongst other unlikely characters who confess faith in Jesus. For my reflections on the significance of this man’s confession of faith in the context of the book of signs as a whole, see https://johntsquires.com/2020/03/17/in-the-most-unlikely-company-confessing-faith-in-jesus-john-9/

Further than this, the man is healed in a most unlikely way. Other healings performed by Jesus and reported already in this Gospel have taken place simply by his word of command (4:47-52; 5:6-9).

This one is different; it involves two distinctive features, both of which push against the boundaries of expected behaviour within the ancient Jewish context. Jesus uses spittle mixed with dirt to make mud, and then he physically touches the blind man as he applies that mud to his eyes (9:6).

Were these actions of Jesus seen as breaching ancient Jewish protocols relating to holiness? The man was blind; traditionally, that made him unclean under the prescriptions of the Law. Blind people were amongst the groups identified as prohibited as acting as priests in the Jerusalem Temple (Lev 21:17-21). Likewise, no blind animals could be presented as offerings for sacrifice in the temple (Lev 22:22; Deut 15:21). Blindness signalled incompleteness. Conversely, one of the promises involved in the vision of eschatological hope, at the end of time, is the removal of blindness (Isa 29:18; 35:5; 42:7).

When Jesus touches this blind man, we may consider that he is identifying himself with the man in his state of incompleteness. If that is so, Jesus appears to be deliberate in breaching that boundary by directly touching the eyes of the blind man. At the very least, he is enacting, in the present time, the eschatological hope, that the blind will see (compare Matt 11:2-6; Luke 7:18-23).

What is even more distinctive in this incident is the use of spittle: it appears only here in this Gospel—although Jesus is also reporting as having used it in healings on two occasions in Mark (Mark 7:33 and 8:23).

It is noteworthy that Luke omits any reference to either incident, whilst Matthew omits the second and reduces the first to a brief summary statement in passing (Matt 15:30-31), with no reference at all to the manner by which Jesus heals in this case. This suggests quite strongly that these two evangelists saw the use of spittle by Jesus as a problematic aspect in these stories. Better to say nothing at all about them!

(Thanks to Elizabeth Raine for these insights from her research into the ways that Matthew redacted Mark’s Gospel, and also for her research in the next matter canvases, the Greek magical papyri.)

Spittle was a substance regarded, much later in Jewish tradition (in a couple of place in the Talmudic writings of the 6th century) as having healing properties in some circumstances—however, we have no evidence from Jewish sources of the time of Jesus, or before him, as to whether that view was current during the first century. It would seem not.

We do know that, in the first century, magicians and healers in the ancient hellenistic world utilised touch as one of the techniques in their repertoire. We know this from many Greek papyri which attest to the techniques of magicians and healers (the so-called Greek magical papyri). Touch was often employed by such people, along with the utterance strange words from foreign languages, or indeed simply gibberish words, and ecstatic states, as the means of effecting healings in others.

(You can read some examples at https://hermetic.com/pgm/index and explore a technical academic analysis of these papyri at https://archive.org/details/TheGreekMagicalPapyriInTranslation/page/n9/mode/2up)

So this element of the story is not strikingly unusual in the larger context of the society of that time. Wandering healers were common in the world of the day, and there are a number of records of their using spittle in their healings. Pliny recommended it for use in treating epileptics (Nat. Hist. 28.7). Two Roman historians reported that Vespasian used spittle to heal blindness (Tacitus, Hist. 4.81; Suetonius, Life of Caesar 8.7.2-3).

Because of this, some rabbis from a later time period, such as the famous Akiba (who was born two decades after the death of Jesus), were not favourably disposed at all towards spittle. Akiba is cited in a tractate of the third century work, the Mishah (Sanhedrin 10:1), as prohibiting its use because of its popular connection with the practices of pagan magicians.

Could it be argued that the reason that spittle was viewed negatively by Jewish teachers of the Law was because it was a substance which rendered someone unclean? The Law was given, in traditional Jewish understanding, to instruct as to what is holy, and what is unholy or unclean. To be rendered unclean meant to be placed outside the holy realm which is where God intends the people of Israel, the holy nation, would be. God’s desire was for Israel to be a holy nation, just as God is a holy God (Exod 19:6; Lev 11:44-45, 19:2, 22:31-33).

In the midst of detailed instructions as to how to maintain this holy state, Lev 15 deals with the ways to manage bodily charges which make a person unclean (semen from a male, menstrual blood from a female). Spittle, however, is not specifically identified here; so this is an hypothesis which relies on an argument by analogy. Could it gain some support from the observation that animals with discharges are grouped with blind, maimed, or skin-diseased animals as being unfit for offering as sacrifices (Lev 22:22)? The argument cannot be sustained with any strength.

There is other evidence that relates to spittle in daily life in the ancient Jewish world, however, which shows that spitting was linked with shaming. Spitting at somebody was regarded as an offensive act, a public shaming of the person spat at. If a man did not marry his dead brother’s childless widow, in accordance with the Law, she was to remove his sandal and spit in his face (Deut 25:9). Spitting in somebody’s face was considered a great disgrace (Num 12:14; Job 17:6; 30:10; Isa 50:6).

At Qumran, there was a prescription in one of the Dead Sea Scrolls (1QS 7.13) that a thirty-day punishment was given if somebody in the assembly spit in the presence of others. The same prohibition is reported by Josephus (Jewish War 2.147).

However, what is noteworthy in the story recounted in the book of signs, is that there is no indication in any way that Jesus was shaming to man. On the contrary, the author of this book takes a known symbol of shame, and turns it into a symbol of hope. Jesus spits—but does not shame. He spits, makes mud, and rubs the blind eyes—and gives hope and new life to the man. John turns this symbol upside down.

Jesus uses spittle, mixed with dirt, to create mud as a healing substance. It seems a strange, almost objectionable, action for him to undertake. And yet, through this challenging process, Hope is born, the gift of sight is given—and faith in Jesus is affirmed.

Later patristic interpretation relates this action in John 9 to the action of the divine, in Genesis 2:7, of creating the human being out of the dust of the earth. I don’t want to head in that direction, as I can’t see any clear signal in the text that invites us to consider this pathway.

And I know also that this focus on physical touching and, worse, the use of a bodily discharge, spittle, in the process of healing, sits quite at odds with the immediate contemporary context. The world is wracked by stories of the rapid spread of the COVID-19 virus, as the pandemic streaks across the globe and permeates every corner of every country.

Looking for the healing of illness in the midst of a viral pandemic is a vain hope. People are dying, and more people will, sadly, die, in this pandemic. Prayers for healing will not turn back the tide of infection and reduce the rate of illness and death that has been unleashed by this potent virus. Perish the thought that we might even think that we could emulate Jesus, and go around spitting on sick peoples, touching them in order to heal them. Let’s not be that literalist—please!!

In our current context, we are being urged not to make physical contact with people (no handshakes, no hugging, etc), to maintain a clear physical distance between ourselves and other people, and even, now, to adopt a regime of self-isolation, not attending any group activities, until the pandemic has significantly subsided.

So this story, set in this Sunday’s lectionary, needs to be understood and applied with great care.

What is clear, however, is that there was a striking and unusual element in the story—for us, and even for people of the ancient world. Jesus heals this man in a most unlikely way. That leads him to be able to see the world, for the first time, through his own eyes; and to see Jesus in a new way, in the light of this new vision.

Perhaps it calls us to be open to unlikely engagements with people (albeit in a socially-distant nature) in different ways, in the rapidly changing context that we find ourselves in today.

This blog draws on material in JOURNEYING WITH JOHN: an exploration of the Johannine writings, by Elizabeth Raine and John Squires (self-published 2014)