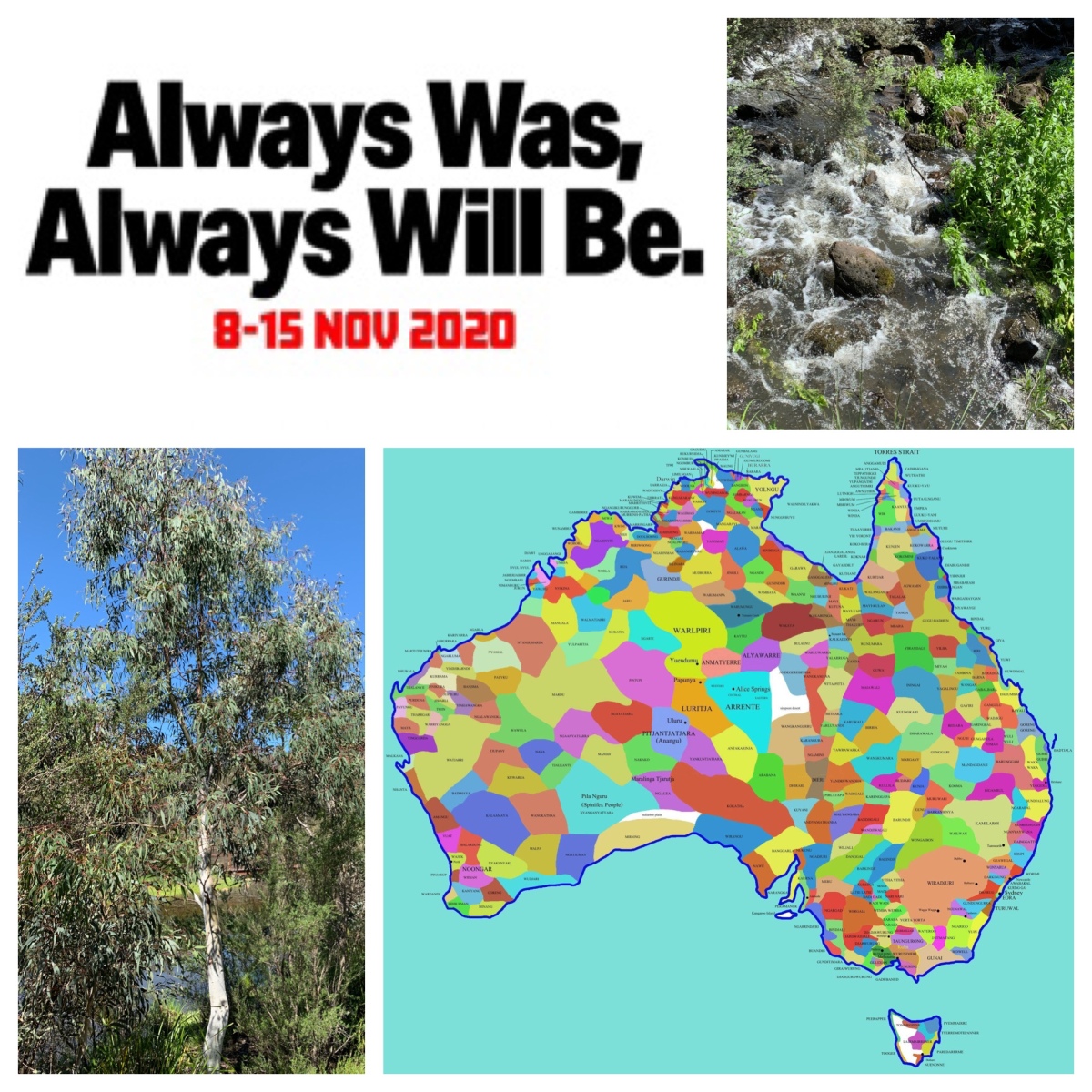 This week is NAIDOC Week 2020. Earlier this year, the decision was taken to postpone NAIDOC Week from the original July dates, due to the impacts and uncertainty from the escalating Coronavirus (COVID-19) pandemic across our communities and cities.

The postponement was primarily aimed at protecting indigenous elders and those in indigenous communities with chronic health issues from the disastrous impacts of COVID-19. So National NAIDOC Week 2020 celebrations are being held this week, 8-15 November. See https://www.naidoc.org.au/about/naidoc-week

The theme, Always Was, Always Will Be, recognises that First Nations people have occupied and cared for this continent for over 65,000 years; that they have a spiritual and cultural connected to this land. Aboriginal and Torres Strait Islander people were Australia’s first explorers, first navigators, first engineers, first farmers, first botanists, first scientists, first diplomats, first astronomers and first artists.

Australia has the world’s oldest oral stories. The First Peoples engraved the world’s first maps, made the earliest paintings of ceremony and invented unique technologies. They built and engineered structures on Earth, long before well-known sites such as the Egyptian Pyramids and Stonehenge.

The adaptation demonstrated by First Peoples and their intimate knowledge of Country enabled them to endure climate change, catastrophic droughts and rising sea levels.

Always Was, Always Will Be acknowledges that hundreds of Nations and our cultures covered this continent. All were managing the land (“the biggest estate on earth”, as Bill Gammage has described it) to sustainably provide for their future. Through ingenious land management systems like fire stick farming, they transformed the harshest habitable continent into a land of bounty. See https://www.naidoc.org.au/get-involved/2020-theme

So this week offers a good opportunity for people around Australia to pause, acknowledge the care that the indigenous peoples of the continent and its surrounding islands have given to the land, and give thanks for their resilience and dedication over many millennia, into the present age.

Within the Uniting Church, indigenous members of the Uniting Church have argued for a treaty within the councils of the Church, and some Synods (such as NSW.ACT) have supported this call. See https://johntsquires.com/2019/07/07/giving-voice-telling-truth-talking-treaty-naidoc-2019/

The Assembly, the national Council of the UCA, has recognised that indigenous people are sovereign over the land we stand on. See https://johntsquires.com/2018/08/10/the-sovereignty-of-the-first-peoples-of-australia/

Sovereignty is defined with reference to two documents. First, the Preamble to the Constitution of Uniting Church in Australia, which defines sovereignty to be “the way in which First Peoples understand themselves to be the traditional owners and custodians”.

Second, the Uluru Statement from the Heart acknowledges that “sovereignty is a spiritual notion, reflecting the ancestral tie between the land and First Peoples”, and affirms that “the First Peoples of Australia, the Aboriginal and Islander Peoples, are sovereign peoples in this land”.

Uniting Church resources for NAIDOC Week 2020 can be found at https://uniting.church/naidoc-week-2020/ and https://nswact.uca.org.au/about-us/first-nations-resources/