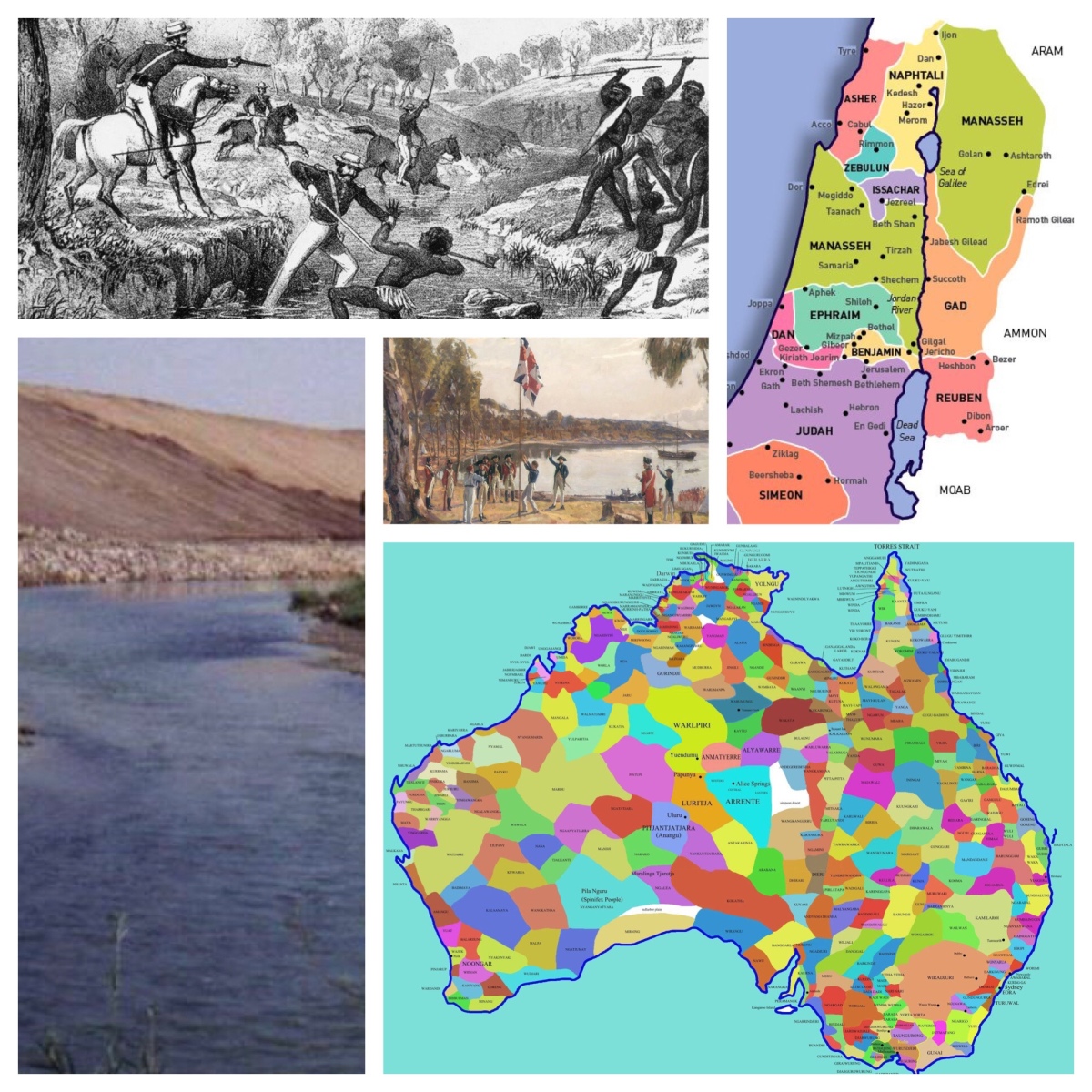 This coming Sunday, the lectionary offers us a passage from Joshua (3:7-17). It is the one and only time, in the three years of the lectionary, that we are invited to read from this book.

The story from Joshua tells, in a highly stylised way, of the entry of the people of God into the promised land. It is a key incident in the extended narrative history that stretches from Genesis to 1 Kings, recounting slavery in Egypt, the redemptive moment of Exodus, the giving of the Law, the long haul of wilderness wanderings, the battles waged to capture the land under the Judges, and the ultimate vindication of the establishment of the kingdom of Israel under King David.

Of course, it didn’t actually happen like this. For one thing, the book of Joshua is almost universally considered to be a wonderfully embellished and highly stylised narrative constructed by the priests in the sixth century BCE, as they prepared to lead exiled people of Israel in their return to the land from which they had been removed.

The book as a whole is marked by the schematic structuring that was so characteristic of priestly narratives. Structure and order was central to their style (see the various genealogies in various books of Hebrew scripture; the regular identifications of dates and locations; the repeated phrases throughout the “seven days” of Gen 1:1-2:3; the structure of the whole of the book of Numbers, as well as Joshua; and the repeated formulaic assessment of various kings in 1 Ki 11:6, 11:19, 14:22, 15:5, 15:11, 15:26, 15:34, 16:7, etc).

For another thing, we know that the division of Israel into the twelve tribes (3:12), so important in the story that the priests of Israel tell about the nation, was a later ideological construction of the priestly story-tellers—there were no neatly schematised tribes at the time of this incident.

And, of course, the whole story of Exodus, liberation, wilderness and conquest, is beset by multiple historical problems. There is no evidence in the records of the Egyptians about the escape of a large crowd of slaves, not any record of the destruction of the Egyptian Army in the Red Sea. There are no remains in the wilderness between Egypt and Israel that suggest that such a large crowd was travelling, for many years, through the desire—no remains of campsites, no graves of deceased people. And there is no archaeological evidence that correlates the biblical record of the capture of Jericho and other cities in the land. All we have is the story told in the Bible.

The form of the story we have was written down quite some centuries from when the event is alleged to have taken place. It serves an ideological purpose, as exiled people prepare to return to the land. As the 5th century exiles enter the land, the story of the wandering tribes entering the land centuries before provides encouragement and inspiration.

So it is not the historical reliability of this incident itself that is to the fore as the story is told. What we, in the post-Enlightenment era, understand to be “history”, is very different from the way that “history” was understood in the time when the story was written.

Rather than history, the narrative offers us a saga that invites us into a creative, thoughtful pondering of the story. It offers the people of Israel, exiles returning from Babylon, hope and assurance for their future. The best question we can ask of this story, is not, “did this actually happen?”, but rather, “what does this story offer to us, today?”

Central in the story is the ark of the covenant. The story tells of the time at Mount Sinai when God established a covenant with Moses and Israel, and the giving of the Law within that covenant relationship. The ark is a sign of the presence of God, continuing on with the people of Israel beyond Mount Sinai (Exod 25:10-22). God is not an absentee God, but very present amongst the people. The ark symbolises and reinforces that message.

The priests serve to mediate the presence of God. They carry the ark of the covenant, maintaining it, ensuring that it remains safe (Deut 10:8, 31:9, 25-26; Josh 3:3, 6, 8, 13). The story offers an indication that holy people are necessities in life; their mediation of the divine in the midst of the mundane is important. (As an ordained person, I confess that I have a vested interest in this claim!) As the priests shape the story, they make sure that priests play a central role in what is narrated.

Joshua as testimony to faith

A striking event demonstrates this: as the priests stand in the river, the waters stand still (3:16), and so the people are able to cross the river and enter the land. Of course, later on in Joshua, another miraculous event takes place, as the sun stands still (10:13). These were not actual events, but symbolic of divine intervention.

We might well compare the New Testament story of the earthquake and resurrection of the saints (found only in Matt 27) after the resurrection of Jesus. This, too, was not an historical event; it was a dramatic tale told to underline that God was active in the story.

The key aspect of the story of the escape from Egypt, as the story is found in Exodus 14-15, is the connection with the Feast of the Passover. The story that is attached to the Exodus actually serves a liturgical purpose; the priests have developed the story to reinforce and highlight the way that God was able to redeem the people—as in the story, so in the experience of the returning exiles.

Indeed, the crossing of the river itself points to the symbolism that this story contributes to the overarching narrative. Leaving Egypt, the Lord God parts the waters, the people pass through, the army is bogged and drowned, and their escape from Egypt is secure. Entering Canaan, the Lord God once again stops the flow of the waters, the priests who carried the ark of the covenant enable the people to cross the river and enter the land, and their hold on the land is made secure. Josh 4:19-24 draws this comparison quite explicitly.

The parallel continues in the strong militaristic element, found in the list of the peoples whom “the living God who without fail will drive out from before you”. The text specifies “the Canaanites, Hittites, Hivites, Perizzites, Girgashites, Amorites, and Jebusites” (3:10). Even before the battles are waged, the victories have been declared. This also provides a neat bookend: the army of Egypt is crushed in Exodus 15, the inhabitants of the land are subdued and defeated in Joshua 3.

What follows on from this story of entering the land is a highly schematic presentation of the military conquest of the land, in the rest of the book of Joshua. The invaders take the key areas in turn: first the Central area (chs. 6-8), then the Southern regions (chs. 9-10) followed by the Northern areas (ch 11). Chapter 12 then provides a summary of the conquest, listing “the kings of the lands whom the Israelites defeated”—a kind of victor’s gloating, “thirty one kings in all” (Josh 3:24).

The story of taking control of the land is then followed by a parallel schematic account of the allotment of the land to each of the tribes. The Transjordan (the land to the east of the Jordan River) is allotted in ch. 13; the Central regions in chs. 14-17; and then the peripheral regions to the north and south in chs. 18-19. Chapter 20 details the allocation of the five “cities of refuge”, whilst chapter 21 identifies the forty-eight towns which were allotted to the tribe of Levi, from which the priests came.

And even as the list of conquered peoples are identified, the savagery of this glorious moment is revealed. The memorial stones provide a reminder of the event (Josh 4:1-10), a reminder of the power of the invading force as they colonise the settled inhabitants of the land. We hear the story from the perspective of the victorious invaders—the people of Israel. The dispossession and death of so many Canaanites is simply “collateral damage” in this process.

Joshua and Israel, Britain and Australia, and the indigenous perspective

This is a story of land, invasion, massacre, colonisation, and victory. It is an ancient story which resonates strongly with the experience of indigenous peoples in the modern era of history. Time and time again, from late medieval times onwards, “explorers” set out from Western powers, “discovered” new lands, followed by “settlers” who came and established “civilisation”, most often by means of “subduing” the indigenous peoples, making them subservient to the “new order”—and even, in many instances, punishing those who resisted their new ways, even utilising means of killing the indigenous peoples.

This is the dynamic of the story of “Israel entering the promised land” which is told in Joshua, as well as the story of “establishing British civilisation in the land of Australia” which is the story of our own continent. The imposition of a new way of living by a more powerful force, the subjugation of those who already were living in the land, and the use of violence and murder to ensure that the new order was maintained and could flourish—all of this is in the history of Australia since 1788.

The story of invasion and settlement, defeat and decline, resonates with the contemporary Australian experience of the indigenous peoples of the continent and its islands. Which gives us pause for thought: how, then, do we hear and understand that story recounted in Joshua?

2 thoughts on “Invasion and colonisation, Joshua 3 and contemporary Australia (Pentecost 23A)”