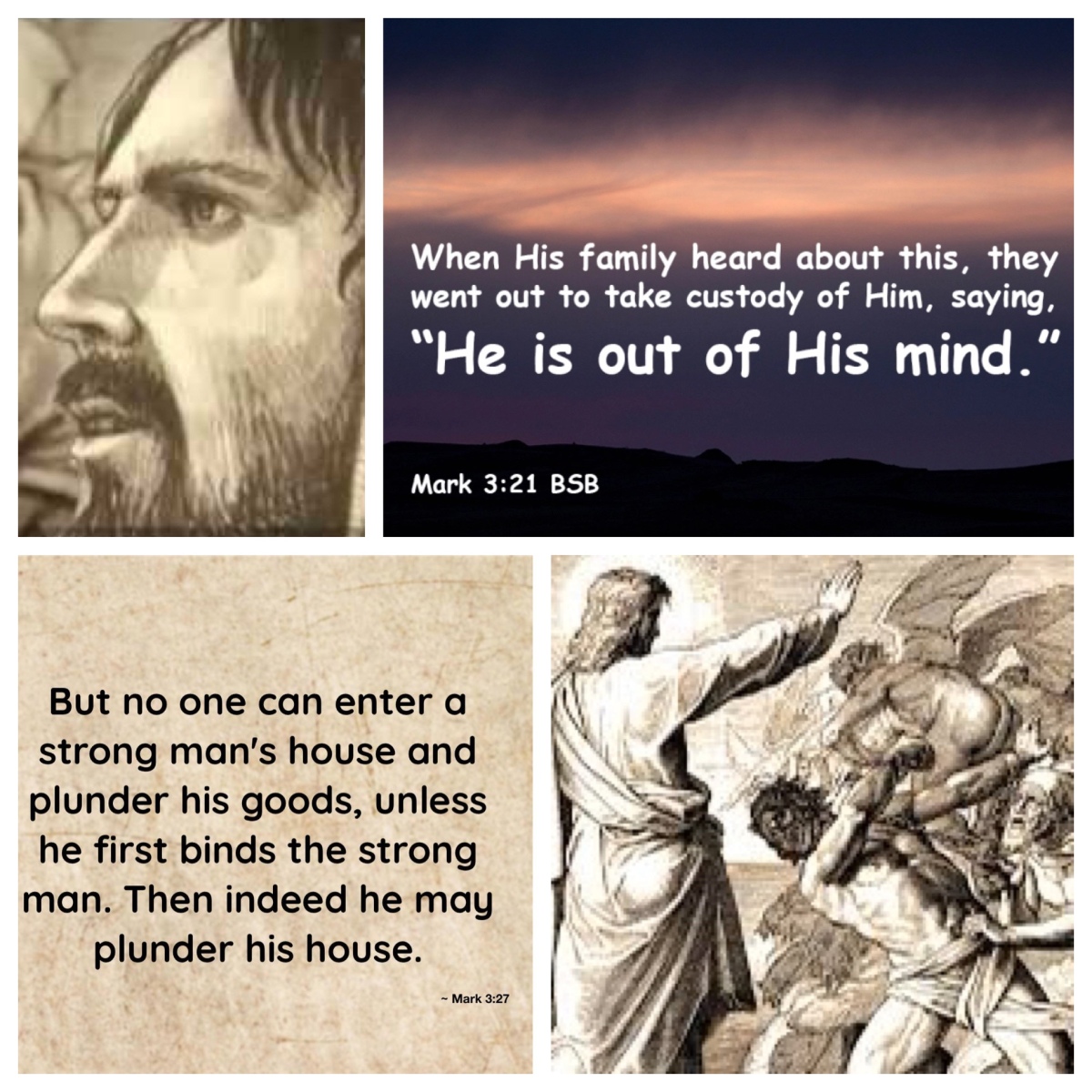 This Sunday, we rejoin the earliest and shortest account of the story of Jesus, the beginning of the good news of Jesus, chosen one, which we know as the Gospel according to Mark. Early in the year, we read passages from chapters 1 and 8. This week, we pick up in the middle of chapter 3, as Jesus “went home” (as the NRSV reports).

In fact, the Greek simply notes that Jesus went “into a house” (εἰς οἶκον, 3:20). Is this the same house that was referred to, in Capernaum, at 2:1? The notion that it was his family home comes from the fact that his family came out of the house to meet him (3:21), and then his mother and brothers are noted once more, later in the scene (3:31).

If this is the family home, in Capernaum, it is an interesting location; there is very little in the Gospels, apart from this scene, that brings the adult Jesus into direct contact with his family. So this is a distinctive scene.

However, whilst travelling around Galilee, Jesus consistently undertook his ministry in houses. That, say some interpreters of this Gospel, most likely reflects the reality that the followers of Jesus, in the decades following, were gathered most often in houses—not in the Temple (except for the idealised account that Luke offers in the early chapters of Acts), not even in the synagogues (although some would have been there), but in houses.

These houses were the sites for hospitality, which was so important in the cultural practices of the day (see https://www.bibleodyssey.org/en/passages/related-articles/hospitality-in-the-new-testament) One scholar describes the house as “the dominant architectural marker” in Mark’s Gospel (https://open.library.ubc.ca/media/download/pdf/24/1.0070991/2 — this is a whole thesis on the topic!)

The work of Carolyn Osiek on the importance of the house for the early church is most significant in this regard (see her overview from a 1995 address at http://www1.lasalle.edu/~dolan/2003/Osiek.pdf). “The local house church or apartment church”, she writes, “provided, among other things, a sense of communal life and individual commitment, theological pluralism, a base for mission, and a model of the universal church.” (See p.21 of this article).

The prominence of the house is certainly reflected in the letters of Paul, who refers often to “the church in the house of …” (Rom 16:5; 1 Cor 11:22, 16:19; Col 4:15; Philemon 2; and 1 Tim 5:13). The early Jesus movement was a house church movement! The standard work in this area has long been the book by Australian scholar Robert Banks, on Paul’s idea of community (http://www.lifeandleadership.com/book-summaries/banks-pauls-idea-of-community.html).

When Jesus comes out of his house in Capernaum, some onlookers describe him as being “out of his mind” (ἐξέστη, 3:21). This is a term that literally means that he was “standing outside of himself”, as if in a kind of dissociative state. It may be that this was the reason that Jesus was returning to his family?

These scribes—hardly friends—articulate what others present may well have been thinking: “he has Beelzebul” (3:23). The charge of demon possession correlates with the accusation levelled at John 10:20. This sits as the fundamental reason for perceiving Jesus as being “out of his mind”.

Beelzebul (Βεελζεβοὺλ), “the ruler of the demons”, is known from earlier scriptural references to Baal-zebub in 1 Kings 1:2–6, 16, where he is described as “the god of Ekron”, a Philistine deity. There is scholarly speculation that Beelzebul may have meant “lord of the temple” or “lord of the dwelling”, from the Hebrew term for dwelling or temple (as found at Isa 63.15 and 1 Kings 8.13); or perhaps it was connected with the Ugaritic word zbl, meaning prince, ruler.

Jesus refutes the charge in typical form, by telling a parable (3:23–27) that ends with the punchline about “binding the strong man” (τὸν ἰσχυρὸν δήσῃ). This potent phrase encapsulates something that sits right at the heart of the activities of Jesus in Galilee—when he encounters people who are possessed by demons, and when he casts out those demons, he is, in effect “binding the strong man”.

The accusation that refers to “blasphemy against the Holy Spirit” (3:29) may well reflect this claim that Jesus was demon-possessed (3:30). That is a claim that cannot be allowed to stand, that cannot be justified in any way—and thus, that cannot be forgiven or set aside. This is a critical dimension for the Jesus who is active in Mark’s Gospel.

We may think of Jesus as a preacher, a story teller, delivering parables and aphorisms. Much of Mark’s account, however, is focussed on the healing and exorcising activities of Jesus.

The action of “casting out” or “driving out” a demon (3:22, 23) is expressed in a word which contains strong elements of force. The phrase is ἐκβάλλει τὰ δαιμόνια. The verb is used regularly to describe the confrontational moment of exorcism (1:34, 39; 3:15, 22-23; 6:13; 9:18, 28, 38). It first appears in the account of Jesus being tempted in the wilderness—here, however, it is the Spirit who casts Jesus out into the wilderness. The story reflects a moment when Jesus comes face to face with his adversary, Satan—and casts his power aside. (The more developed dialogues in Matthew 4 and Luke 4 expand on this understanding of the encounter.)

On the first occasion when Jesus has gathered all twelve apostles together, he gives them a twofold commission: “he appointed twelve…to be with him and to be sent out to proclaim the message and to have authority to cast out demons” (3:14–15). As the Gospel then proceeds to report how Jesus speaks and acts, the meaning of this discipleship is spelled out. The apostles—and other followers—have the opportunity to learn from his teachings and to witness his actions while they are with Jesus, and then to replicate these teachings and actions through their presence in other places.

“Proclaiming the message and casting out demons” is how the activities of Jesus are characterised (1:39). These same activities form the basis for the mission of the twelve as it is reported at 6:7–13. They model their words and deeds on Jesus: “they proclaimed that all should repent…they cast out many demons and anointed with oil many who were sick and cured them” (6:12–13).

Their mission is to be characterised by an ascetic mode of dress (6:8–9) and a focussed mode of proceeding (6:10–11). Their attention is to be directed entirely to the task at hand. In this way they are to follow the example and pattern of Jesus, confronting the powers and casting them out of their strongholds. This is what is at stake in the scene we read this Sunday (3:20–35).

The final section of this scene (3:31–35) depicts the breach between Jesus and his family—those who had earlier come to greet him and care for him in his state of being “out of his mind” (3:20–21). No longer are they to function as his family; those who are closest to him, “whoever does the will of God”, now serves as his brother, sister, mother. The work of challenging and exorcising “the ruler of demons” is deeply costly. The challenge to follow him is likewise incredibly costly.