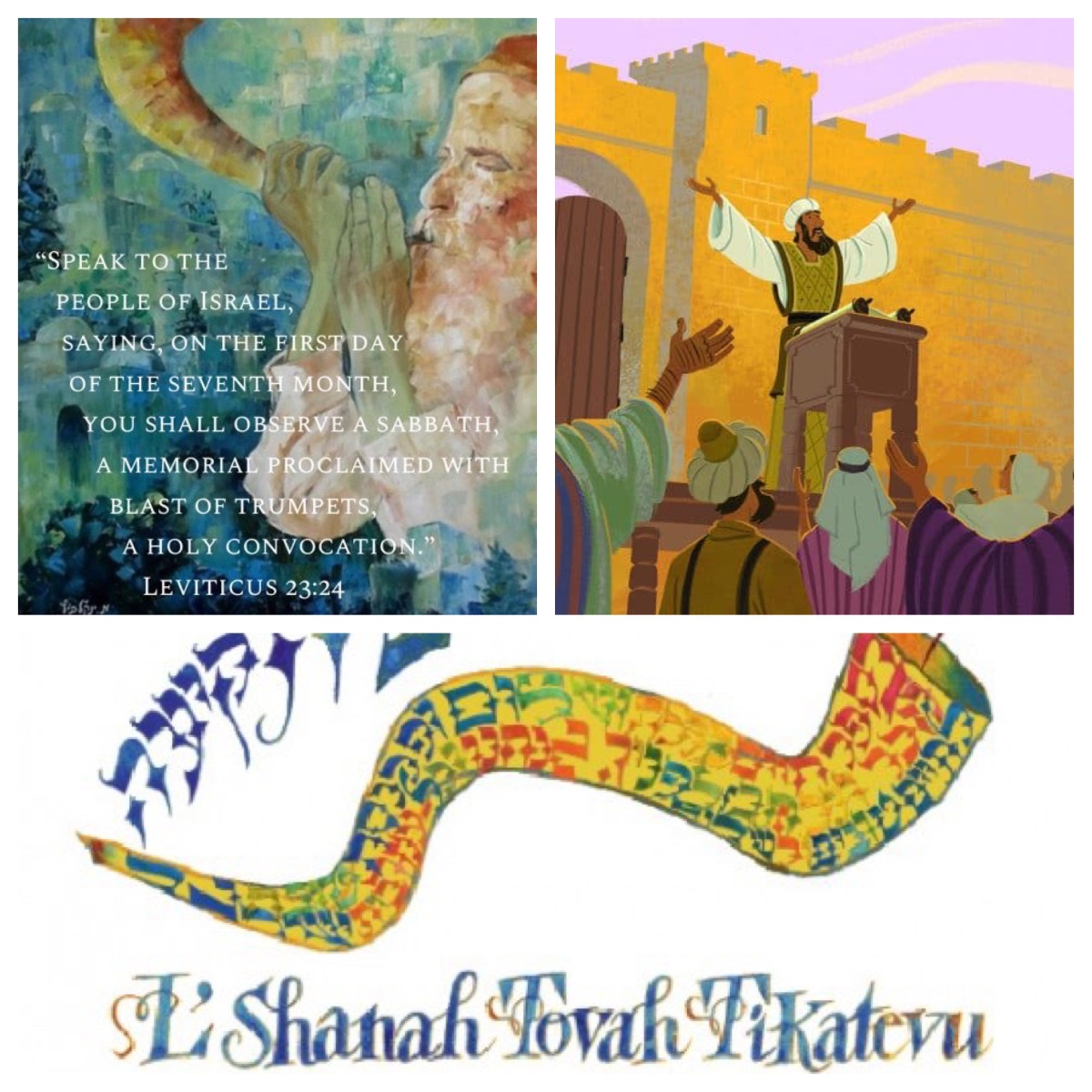 Rosh Hashanah is the first of the High Holidays, a series of ten “Days of Awe”. These ten days provide a period when observant Jews devote themselves to prayer, good deeds, reflection on the mistakes of the past year, and making amends with those whom they have hurt. It culminates with Yom Kippur, the “Day of Atonement”, which this year will fall on Thursday 16 September.

In Jewish tradition, so I understand, there is a belief that God spends these ten days determining whether to give life or death to all creatures during the coming year. Jewish law teaches that God inscribes the names of the righteous in the “book of life” and condemns the wicked to death on Rosh Hashanah; people who fall between the two categories have until Yom Kippur to perform teshuvah, or repentance.

This concept is clearly reflected in the scriptures of Christianity. At the final judgment in Revelation 20:15, we read that “anyone whose name was not found recorded in the Book of Life was thrown into the lake of fire.” That “Book of Life” reflects Jewish tradition, as the place where God records the names of those people adjudged as worthy of life in the coming year. In Revelation, the book is “the Lamb’s book of life” (Rev 21:27). Paul exhorts his “loyal companion” to help Euodia and Syntyche, noting that “they have struggled beside me in the work of the gospel, together with Clement and the rest of my co-workers, whose names are in the book of life” (Phil 4: 2–3).

Is this what Jesus is alluding to when he tells the 70 disciples to rejoice because “your names are written in heaven” (Luke 10:20)? For the person writing “to Timothy” in the name of Paul towards the end of the first century, it is in fact Jesus himself who will carry out the judgement about this matter (2 Tim 4:1, “Christ Jesus, who is to judge the living and the dead”).

Rosh Hashanah is observed on the first two days of Tishrei, the seventh month of the Hebrew calendar. It is described in the Torah as יום תרועה (Yom Teru’ah, a day of sounding [the shofar]). The day begins with the sounding of the shofar, a ram’s horn, and then during the service a trumpet is blown 100 times. The festival, not surprisingly, is called The Feast of Trumpets.

That festival is described in Leviticus 23:24–25: “In the seventh month, on the first day of the month, you shall observe a day of complete rest, a holy convocation commemorated with trumpet blasts. You shall not work at your occupations; and you shall present the LORD’s offering by fire.”

There is a similar description in Numbers 29:1, although that passage then continues with detailed descriptions of the burnt offering (involving nine animals) and grain offerings associated with each burnt offering, which provide “a pleasing odour to the Lord”, offered “to make atonement for you” (Num 29:2–5).

These texts are priestly prescriptions, contained in books written after the return from exile in Babylon from the 520s BCE onwards, presenting as requirements for the people of Israel centuries before, when the Temple built in Jerusalem under Solomon was the focus of religious life.

After five decades of living in a foreign land, the priests are reinforcing these sets of laws for use in the rededicated Temple in the rebuilt Jerusalem in the time of Ezra, as the governor of the city, Nehemiah, reports (Neh 7:73–8:3). This is clear from the way the date is specified (“when the seventh month came—the people of Israel being settled in their towns—all the people gathered together into the square before the Water Gate”, 7:73–8:1). What follows is an account of a covenant renewal ceremony, as the Law is read, and explained, to all the people (Neh 8:1–12).

In this way, the traditions of centuries past are revitalised for a new situation. Jewish traditions relating to the Festival of Trumpets continue to be revitalised in subsequent centuries. Philo of Alexandria, the first‑century BCE Jewish philosopher, describes the first day of the seventh month as the great “Trumpet Feast”. He connects it with the sounding of the horn at Mount Sinai when revelation took place (Exod 19:13–16).

Philo interprets the trumpet as an instrument and symbol of war, and reinterprets the festival as relating to peace and abundance: “Therefore the law instituted this feast figured by that instrument of war the trumpet, which gives it its name, to be as a thank offering to God the peace‑maker and peace‑keeper, who destroys faction both in cities and in the various parts of the universe and creates plenty and fertility and abundance of other good things” (Philo, Special Laws, 2:188-192).

The significance of the festival is being reinterpreted and re-applied in the city of Alexandria in the decades prior to the time of Jesus. There is no reference to the festival signifying the new year. Had this dimension of the festival been dropped, at least in Alexandria, five centuries after Nehemiah? Or was it simply assumed, and not mentioned because it was common knowledge at the time?

Two centuries later, well after the Second Temple built under Nehemiah had been destroyed, Rabbi Judah ha-Nazi drew together the many oral traditions about the Law in a document we know as the Mishnah. The title is a Hebrew word which comes from a root word meaning “repetition”. The Mishnah contains the teachings of rabbis from centuries past, which were learnt by male Jewish students by study and repetition.

In the Mishnah, the eighth tractate (Rosh Hashanah) in the second order (Moed, meaning Festivals) deals with this festival. It provides the description, “On Rosh Hashanah all human beings pass before [the Lord] as troops, as it is said, ‘the Lord looks down from heaven, He sees all mankind. From His dwelling place He gazes on all the inhabitants of the earth, He who fashions the hearts of them all, who discerns all their doings’ (quoting Ps 33:13–15)” (Mishnah, Rosh Hashanah 1.2).

Other sections deal with the various stages of the festival, and provide a set of laws relating to the shofar, the trumpet sounded to give the festival its name.

In the Talmud, a later expansion of the discussions found in the Mishnah, further expositions are provided, including a detailed set of provisions relating to the shofar, which is to be blown on two occasions on Rosh Hashana: once while “sitting” (before the Mussaf, the additional prayer to be said on a festival day), and once while “standing” (during the Mussaf prayer). This increased the number of blasts from the basic requirement of 30, to 60.

An even later rabbi, Nathan ben Jehiel of Rome (1035–1106), provided for 100 blasts: 30 before Mussaf, 30 during the Mussaf silent prayer, 30 during the cantor’s loud repetition of Mussaf, and 10 more after Mussaf. And so the development and re-interpretation of the festival continued.

I found a good page on the history.com website that explains a number of the customs currently associated with Rosh Hashanah.

Apples and honey: One of the most popular Rosh Hashanah customs involves eating apple slices dipped in honey, sometimes after saying a special prayer. Ancient Jews believed apples had healing properties, and the honey signifies the hope that the new year will be sweet. Rosh Hashanah meals usually include an assortment of sweet treats for the same reason.

Round challah: On Shabbat (the Jewish Sabbath) and other holidays, Jews eat loaves of the traditional braided bread known as challah. On Rosh Hashanah, the challah is often baked in a round shape to symbolize either the cyclical nature of life or the crown of God. Raisins are sometimes added to the dough for a sweet new year.

Tashlich: On Rosh Hashanah, some Jews practice a custom known as tashlich (“casting off”), in which they throw pieces of bread into a flowing body of water while reciting prayers. As the bread, which symbolize the sins of the past year, is swept away, those who embrace this tradition are spiritually cleansed and renewed.

My friend Peta Jones Pellach has written a lovely blog for Rosh Hashanah at https://blogs.timesofisrael.com/storytelling-for-the-new-year/