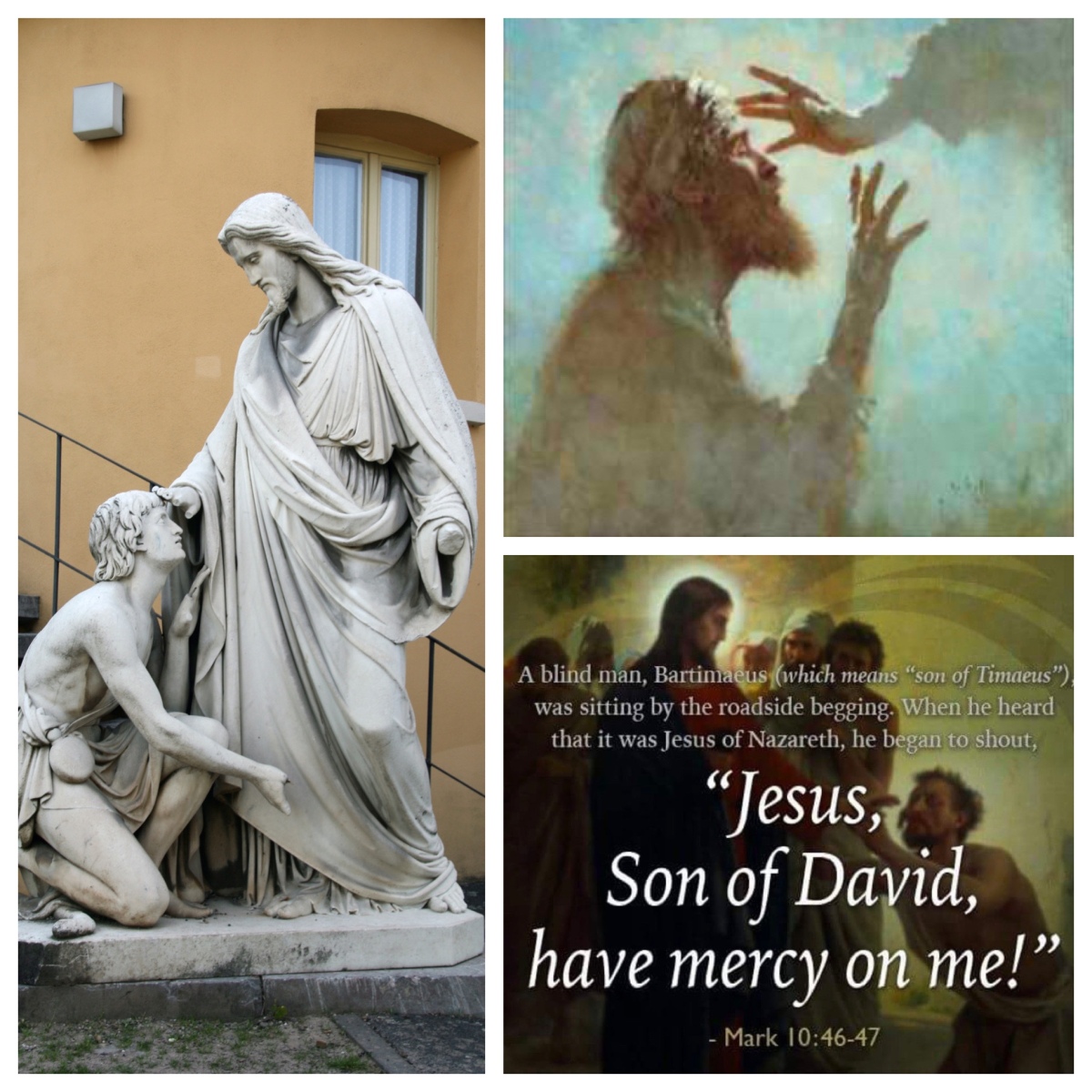 The man sits on the ground, beside the road leading into Jericho. Sensing what was happening, who was passing by, what was being spoken about; unable to use his eyes, he was undoubtedly attentive through his listening ears, through the sounds he could hear, as well as the fragrances he could smell. Because of this, he knew the identity of the person passing by, so he calls out with confidence, “Jesus of Nazareth, Son of David, have mercy on me” (Mark 10:47).

The scene is familiar. Some chapters earlier, in Bethsaida, another blind man also engages with Jesus; and Jesus heals the man. “He saw everything clearly” (8:25), just as the second man “immediately regained his sight” (10:52). Yet the two scenes are remarkably different. The first man healed is not named; whilst the man outside Jericho is identified as Bartimaeus (10:46).

The unnamed man is brought to Jesus by some friends, begging Jesus to heal him (8:22). By contrast, the later man is initially is hindered from engaging with Jesus by the crowd, demanding that he remain silent (10:48). And whilst the restoration of sight takes place immediately in the Jericho scene (10:52), in the Bethsaida scene it takes two attempts by Jesus before the man can see.

First, Jesus performs the actions of a traditional healer, placing saliva on his eyes and touching him (8:23; on the traditional healing practices of the time, see https://johntsquires.com/2020/03/19/in-the-most-unlikely-way-touching-the-untouchable-john-9/). After that, because the man can only see imperfectly, Jesus touches his eyes for a second time; after this, the man can see clearly (8:25).

A number of interpreters have commented on the similarities and contrasts in these two scenes. They provide, it is felt, bookends to the important central section of this earliest Gospel (8:27–10:45). There are some key events that take place within these two bookends.

First, there is Peter’s confession that Jesus is the Messiah (8:29). This is one of the high moments at the mid-point of the whole narrative of this work. It serves to remind the readers what was already declared to them at the very start of the gospel: that it was about the good news of Jesus, Messiah, Son of God (1:1).

The other key moment in this section comes almost immediately after Peter’s confession: the scene of Transfiguration (9:2). This takes place on the top of a mountain, a traditional place for encountering the divine in Israelite stories (think Moses on Mount Sinai, Solomon’s Temple on Mount Zion, the vision of the prophet Isaiah that all the nations would stream to Mount Zion, and the place where Matthew locates the teaching of Jesus in the “Sermon on the Mount”).

This key mountaintop moment contains the words from the heavens about Jesus, “This is my Son, the Beloved; listen to him!” (9:7). These words link back to the initial baptism of Jesus, when the same words were heard (1:11) and forward to the final scene of crucifixion, when a centurion at the foot of the cross witnesses Jesus’ death, and declares, “Truly this man was God’s Son!” (15:39). All three scenes contain the foundational statement, recognising Jesus as Son of God, reiterating the other important element in the opening verse (1:1).

There are other significant components within this central section of the Gospel. Three times, Jesus makes clear predictions of what lies in store for him in Jerusalem (8:31; 9:31; 10:32–34). This triple passion prediction is actually the central spine of the whole narrative. The cross is the climax of the story; the road to the death of Jesus has been in view since early in the narrative, when “the Pharisees went out and immediately conspired with the Herodians against him, how to destroy him” (3:6). From that moment onwards, the likelihood that Jesus would be caught and dealt with was strong.

Finally, after each one of these predictions of his fate, Jesus provides clear and direct teachings about the cost of discipleship. We hear “take up your cross” and “lose your life” in the first set of teachings (8:34–9:1). “Whoever wants to be first must be last of all and servant of all” is spoken in the second set of teachings (9:33–37), followed by guidance about taking care of “the little ones” (9:38–50).

“Whoever wishes to become great among you must be your servant and whoever wishes to be first among you must be slave of all” is uttered in the third set of teachings (10:35–45), an expanded saying with synonymous parallelism reflecting back to the earlier teachings. And the final set of teachings ends with a clear statement about the role of the Son of Man as the model and the means of redemption for his followers (10:45).

So this story of Jesus, blind Bartimaeus, and the crowd in Jericho (10:46–52) brings to a close a rich and deeply significant sequence of scenes, which began back in Bethsaida with Jesus, an unnamed blind man, and the crowd in that town (8:22–26). The two outer scenes provide a carefully-crafted literary framing for the central sequence of scenes.

The symbolism is significant: two scenes with people unable to see, reaching out to Jesus, experience the piercing light after their years of blindness—these two scenes surround the confession of Jesus as Messiah and his transfiguration, the three predictions of what lies in store for him in Jerusalem, and the three blocks of teaching about the way of discipleship.

What was not able to be seen, is now made manifest. What was hidden, incomprehensible, is now revealed. For the disciples, there can be no excuse, and no turning back. Jesus no longer will ask, “do you not understand?” (4:22, 13; 6:52; 7:18: 8:17, 21; 9:32), for understanding has been provided. The pathway is set. The way of discipleship is clear. As Bartimaeus joins with the disciples to follow Jesus on that way, so we who hear the story are invited also to “follow him on the way”.