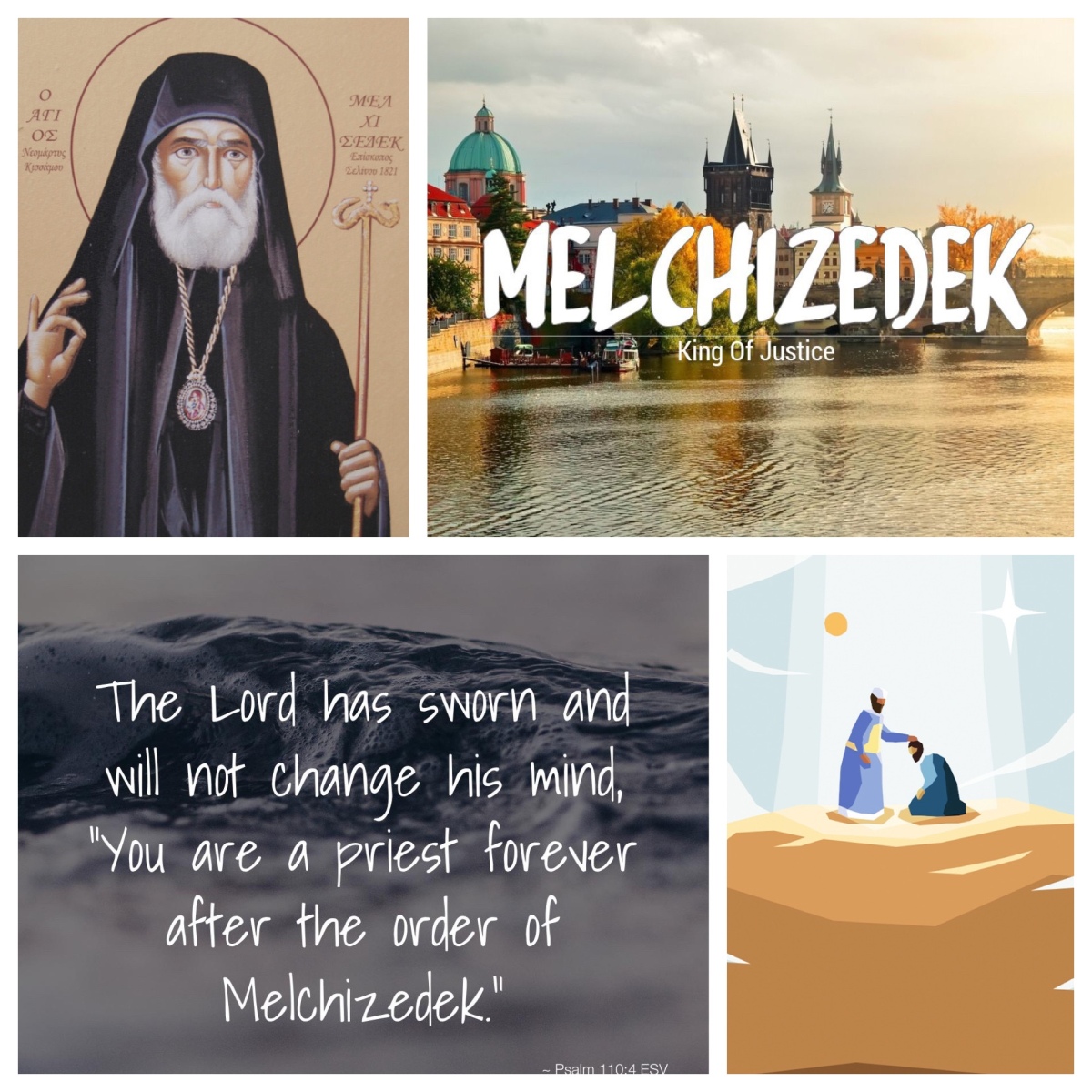 “You are a priest forever, according to the order of Melchizedek” (Heb 5:6 and 7:17, quoting Psalm 110:4). This is a distinctive teaching, found only here in the New Testament. What are we to make of it? Who is Melchizedek? How is he relevant to Jesus? Why is this relevant for us today?

The book we know as “the letter to the Hebrews” is a most distinctive work. It is regularly described as a letter, but it doesn’t follow many of the conventions of a Hellenistic letter. It claims to be a word of exhortation, but many long sections in the work are in fact didactic expositions, not pastoral encouragements.

Alone amongst the twenty one letters in the New Testament, this book makes no claim as to its author. It sits oddly amongst the thirteen letters of Paul, the three letters of John, the two letters of Peter, and the single letters of James and Jude. See https://johntsquires.com/2021/09/29/the-word-of-exhortation-that-exults-jesus-as-superior-hebrews-1-pentecost-19b/

Melchizedek is a Semitic name which is comprised of two separate words: melek, meaning king, and zedek, from tsedeqa, the Hebrew word for righteousness. These terms bring together two key aspects of life and faith for the ancient Israelites. The king was the ruler and leader, through whom the people were in covenant with God (2 Sam 7). Righteousness was the central characteristic of God, which was to be the central commitment of the people of Israel (Gen 18:19). So the king was to rule by righteousness (Psalm 72:1-4).

We meet Melchizedek, the king of righteousness, early in Genesis, when Abram is making his way from Egypt, where he went during the famine (Gen 12:10), through the Negev (Gen 13:1). Abram meets Melchizedek in a place named as The King’s Valley (Gen 14:17). It occurs after God had called Abram and Sarai from their life in Ur of the Chaldees (Gen 11:31) and before God makes a covenant with Abram (Gen 15), which Abram (at the ripe old age of 99 years) seals through the rite of circumcision (Gen 17).

The encounter with Melchizedek is a short interlude in the saga, immediately after Abram has recused his son Lot from a coalition of kings in the Mesopotamian region (Gen 14). Salem, of which he is said to be king (Gen 13:18), is very probably Jerusalem—Psalm 76:2 places Salem in parallel with Zion, pointing to this identification. And Jerusalem was the seat for King David and his descendants, so it makes sense that The King’s Valley would be in this area.

Melchizedek offers Abram bread and wine, and prays over him, conferring a blessing on him (Gen 14:19–20). It is the blessing of “El ʿElyon,” which is a name of Canaanite origin, probably designating the high god of their pantheon. Abram responds by offering Melchizedek a tithe (Gen 14:21), and is insistent that Melchizedek accept all that is offered.

In Roman Catholic tradition, the offering of bread and wine by Melchizedek is regarded as a “pre-presentation of the Mass”—a prefiguring of the sacrifice of Jesus celebrated in their liturgy. He is mentioned in the First Eucharistic Prayer of the Mass, and is remembered as a martyr each year on 26 August. However, the offering of a meal to troops returning from battle was simply a common practice at the time; see, for instance, the lavish meal provided for the returning troops of David at 2 Sam 17:27–29.

The portrayal of Abram as the leader of an army (Gen 14:13–16) which was able to defeat the forces of a coalition of many kings (Gen 14:8–9) is recognised as an anomaly; elsewhere in the section of Genesis recounting the saga of Abraham (Gen 12–25), there is no indication at all that Abram had any any warmongering tendency or any capacity to fight battles.

Because of this, Old Testament scholar Joseph Blenkinsopp has suggested that the story of Melchizedek was inserted into the narrative about Abram to give validity to the priesthood and tithes connected with the Second Temple, after the Exile (which was the period when the book of Genesis was compiled). The links are made in that the King of Salem blesses and breaks bread with the ancestor of David, king in Jerusalem, and confers a priestly blessing from one of the gods of the land on the ancestor, Abram, from whom the Levites descended and amongst whom the sacrificial system and tithing requirements evolved.

The story has a clear validating purpose for the patterns that are being (re)established amongst the returned exiles in Jerusalem. It explains why David set up his headquarters in Jerusalem, and established a priesthood there which would receive offerings from all the people under his control. That validated the claims of the priests as the administered and oversaw the sacrificial system of the Temple cult, for they were seen to be adhering to the pattern established long ago under David—and, indeed, demonstrated long before that, by Abram.

There is nothing else known about Melchizedek, either in the Hebrew Bible, or in other ancient texts. We have no genealogy of Melchizedek; he simply appears, blesses Abram, and disappears from the story. He serves his single purpose, and then is heard of no more.

Certainly, the unique role and distinctive character of Melchizedek—and perhaps his mysterious origins—have made him a character of fascination. And that has been intensified within Christianity, because of the way that the book of Hebrews equates Jesus with Melchizedek and puts them into parallel with each other.

The word of exhortation encourages those who received this “letter” to “hold fast to [their] confession” that they have “a great high priest who has passed through the heavens” (Heb 4:14; see https://johntsquires.com/2021/10/05/a-great-high-priest-who-has-passed-through-the-heavens-hebrews-4-pentecost-20b/)

Thus, Jesus is decreed to be son of God (Psalm 2:7, cited at Heb 5:5) and then “a priest forever” (Psalm 110:4, cited at Heb 5:6). Both psalms which are cited are royal psalms, considered to provide messianic indicators, and thus are picked up within New Testament writings to claim the significance of Jesus, son of God, priest of the new covenant.

These psalms feed into the line of interpretation which sees Jesus in exalted terms—in this book, at least—as the great high priest, the superior high priest, the perfect high priest, the one who is pioneer and perfecter of our faith. And that line runs on beyond the New Testament, into other sects and cults that accord prominence to Melchizedek.

But for myself, that is pressing the point too far, and wringing every tiny drop of significance out of something that I see more as an exotic reference to an ancient tale—a story that is not historical, but was crafted for its own apologetic purposes amongst the returned exiles in Jerusalem. It’s a little bit of New Testament exotica. Thanks, Hebrews!!

1. Only three books of the Bible mention Melchizedek

2. The New Testament says more about Melchizedek than the Old Testament

3. Melchizedek is a contemporary of Abraham’s

4. Melchizedek has no recorded family

5. Melchizedek was a priest of God Most High

6. Melchizedek gives blessings (or at least one)

7. Melchizedek is the king of Salem

9. The order of Melchizedek is royal and everlasting

10. Melchizedek was greater than Abraham and Aaron