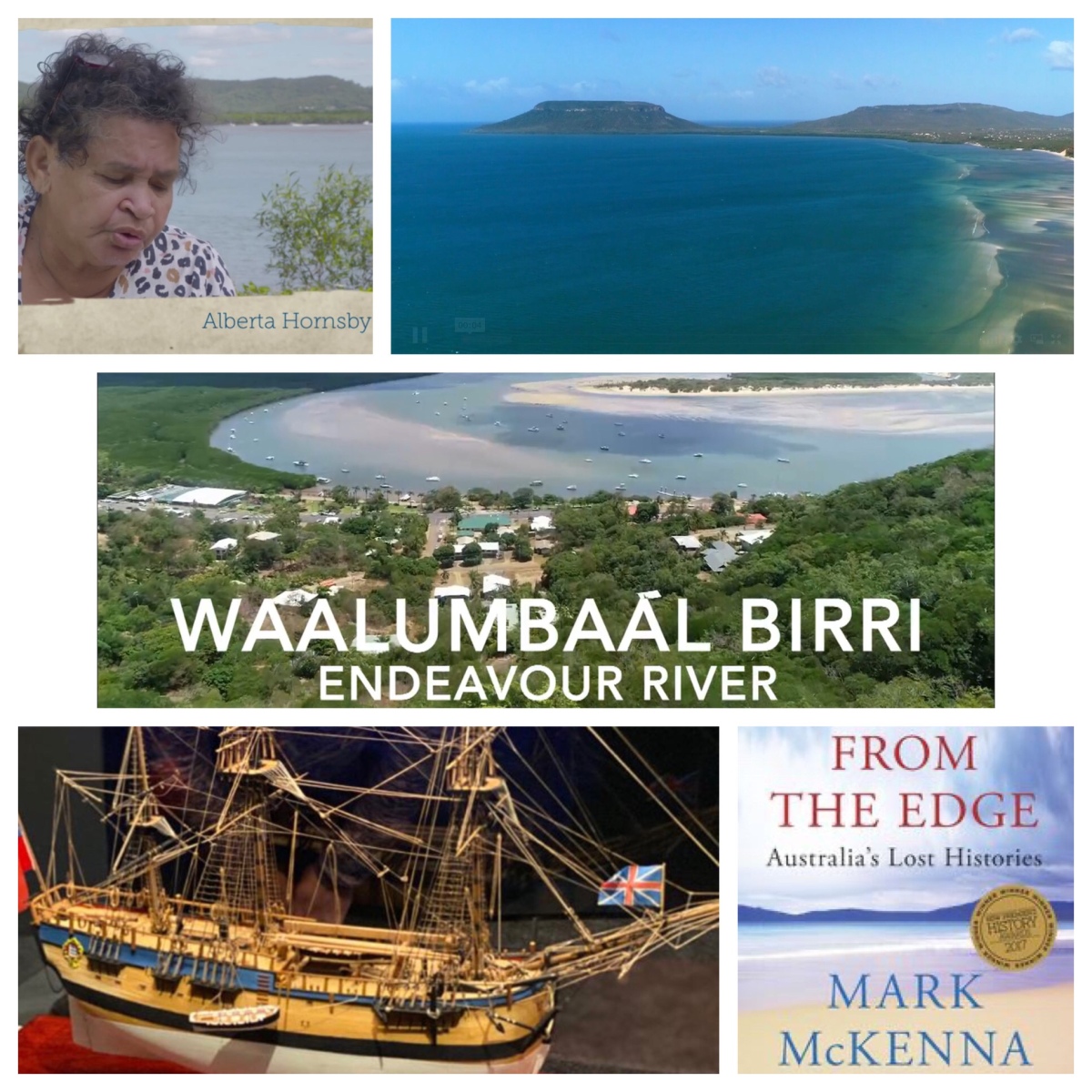 As the story is told amongst the Guugu Yimithirr people of the area we call North Queensland, one of the elders of the people, Ngambri Yarrbarigu, said these words to James Cook, captain of the HMS Endeavour, 250 years ago this week. The ship had been laid up on the land of the Guugu Yimithirr for some weeks, as the British sailors repaired its hull after it had struck a reef in May 1770.

The men withdrew, placed their spears on the ground, and sat down. They were acting in the manner prescribed, in their culture, to signal friendship.

What had caused this desire to seek reconciliation? That was the incident relating to the turtles, from the penultimate visit to the ship by the Guugu Yimithirr. That took place on 17 July. That visit severed the relationships that had grown over recent weeks, which they then sought to repair.

The British had been engaging with the Guugu Yimithirr on and off over the weeks that they were beached, beside the river which Cook names the Endeavour River. To the people of that land, this was Waalbumbaal Birri, the river wending its way to the sea from the nearby mountain Gaya.

It was their land. They had their own customs, their own practices. They had every right to expect that the visitors would adhere to these customs and practices. It was their land, their river—they had been custodians of the land since time unknown. They had stories in their collective memory of times past (what we white folk later would call “the Dreamtime”).

On 15 July, Cook wrote in his journal: “Gentle breezes at South-East and East. P.M., got on board the Spare Sails and sundry other Articles. In the A.M., as the people did not work upon the Ship, one of the Petty Officers was desirous of going out to Catch Turtles. I let him have the Pinnace for that purpose, and sent the Long boat to haul the Sean, who caught about 60 fish.” The invaders must surely have rejoiced at this haul of sea creatures, destined, no doubt, to be cooked and eaten.

The next day, Cook’s journal records, “In the evening the Yawl came in with 4 Turtle and a Large Sting ray, and soon after went out again; but the Pinnace did not return as I expected.”

Then, on 17 July, another journal entry: “In the evening the Pinnace returned with 3 Turtles, 2 of which the Yawl caught and sent in”, recording the arrival of yet more bounty—before continuing with a lengthy technical discussion of astronomical phenomenon: “At 7 hours 41 minutes 17 seconds p.m. observ’d the first Satellite of Jupiter to Emerge …”

What are we to make of this regular fishing-and-catching activity of the British? From one point of view—from the perspective of the invading sailors, arriving at this place from their sea journey—this natural bounty was there to be caught and used for their own purposes. There was no sign that announced “Trespassers Will Be Prosecuted”. There was no expectation, in their minds, that these animals were there for any other reason, than to be observed, analysed, caught, and eaten.

But from the point of view of the people on the land—the Guugu Yimithirr who had lived on and cared for the land for millennia—this was their land, their river, their ocean, and their creatures. Theirs, not in the sense of personal possession and ownership; but theirs, in the sense of given over to them to care for and nurture, for which they bore an enduring custodial responsibility. What would they have made of the regular forays to capture their fish and turtles?

(The indigenous understanding of relationship to the land, articulated as one of sovereignty, is clearly expressed in the Statement from the Heart; see https://ulurustatement.org/the-statement. On the Uniting Church attitude towards the sovereignty of the land of Australia, see https://johntsquires.com/2018/10/13/on-covenant-reconciliation-and-sovereignty/)

So on 18 July, the British encountered the Yuugu Gimithirr once again. Cook writes, “Mr. Banks, Dr. Solander, and myself took a turn into the woods on the other side of the water, where we met with 5 of the Natives; and although we had not seen any of them before, they came to us without showing any signs of fear. 2 of these wore Necklaces made of Shells, which they seem’d to Value, as they would not part with them.” This encounter, as previous ones had been, was congenial and mutually respectful.

Cook continues, “In the evening the Yawl came in with 3 Turtle, and early in the A.M. she went out again. About 8 we were Visited by several of the Natives, who now became more familiar than ever.” He notes that he and Banks then took a trip along the shore for 6 or 8 miles, before returning, and noting that “we return’d to the Ship … and found several of the Natives on board. At this time we had 12 tortoise or Turtle upon our Decks, which they took more Notice of than anything Else in the Ship, as I was told by the officers, for their Curiosity was Satisfied before I got on board, and they went away soon after.”

The focus of attention was now very clearly on the turtles. They had obviously become a point of contention for the Yuugu Gimithirr. Were the British aware of this?

The next day, 19 July, another group came to the British—this time, 10 or 11 of them. “Most of them came from the other side of the Harbour, where we saw 6 or 7 more, the most of them Women, and, like the men, quite naked.” It was clear that they had come to retrieve “some of our Turtles” (as Cook wrote). In the attempt to remove some turtles, “they grew a little Troublesome, and were for throwing every thing overboard they could lay their hands upon.”

Cook offered bread, which “they rejected with Scorn, as I believe they would have done anything else excepting Turtle”. The aim of the exercise was clearly to take some turtles with them.

Cook’s journal then reports the dramatic events that ensured: “one of them took a Handful of dry grass and lighted it at a fire we had ashore, and before we well know’d what he was going about he made a larger Circuit round about us, and set fire to the grass in his way, and in an instant the whole place was in flames.” The cordial relationships had turned to fierce antagonism.

“As soon as they had done this they all went to a place where some of our people were washing, and where all our nets and a good deal of linnen were laid out to dry; here with the greatest obstinacy they again set fire to the grass, which I and some others who were present could not prevent, until I was obliged to fire a Musquet load with small Shott at one of the Ring leaders, which sent them off.” The man whom Cook wounded with a musket shot ran away.

Cook reports that the fore “spread like wild fire in the Woods and grass”, and reports that one man was injured: “we saw a few drops of blood on some of the linnen he had gone over”. Cook and Banks stepped out and met 3 or 4 men. “As they had each 4 or 5 Darts, and not knowing their intention, we seized upon 6 or 7 of the first darts we met with. This alarm’d them so much that they all made off.”

The British pursued the Yuugu Gimithirr; “after some little unintelligible conversation had passed they laid down their darts, and came to us in a very friendly manner. We now return’d the Darts we had taken from them, which reconcil’d everything.”

The journal report then concludes, “all came along with us abreast of the Ship, where they stay’d a short time, and then went away, and soon after set the woods on fire about a Mile and a half or two Miles from us.” Descendants of the Yuugu Gimithirr recall, today, this encounter as a sign of reconciliation.

However, Cook appears to have omitted a significant detail at the critical point. Mark McKenna, an Australian historian, has explored this encounter by reading the journals of both Cook and of Banks, as well as interviewing descendants of the Yuugu Gimithirr, Alberta Hornsby and Eric Deeral. They told McKenna stories which have been passed down amongst their people. Those stories add other elements to the events that took place while the British and the Yuugu Gimithirr interacted.

(You can read a review of McKenna’s book, From the Edge, at http://press-files.anu.edu.au/downloads/press/n4634/pdf/book_review03.pdf)

They claim this as an important historic event, as it is believed that this is the first recorded reconciliation between Europeans and Indigenous Australians ever. The explanation that Alberta Hornsby provides is fascinating, and revealing.

She tells McKenna the story she knows. Angered by several men who’d set fire to the grass where he’d left a “forge and a sow and a litter of young pigs,” Cook fired his musket, wounding an Aboriginal man, after which the men immediately retreated.

Seizing the spears that they had left behind, Cook and Banks were approached about an hour later by “a little old man” carrying a spear “without a point,” with several men brandishing spears walking only a few metres behind him. As he walked towards them, the old man halted several times, “collecting moisture from under his armpit with his finger” and drawing it “through his mouth.” Cook and Banks “beckoned him” to come closer.

At this point, the old man turned to his comrades, who “laid their lances against a tree.” Then, slowly, they all came forward to meet one another. After they exchanged gifts and greetings, Cook returned their spears, remarking later in his journal that this seemed to have “reconciled everything.”

Alberta Hornsby and her late uncle, Eric Deeral, have explained the story through Guugu Yimithirr law: how the old man, by drawing sweat from under his armpits and “blowing the sweat on his hands into the air,” was performing a ritual known as ngalangundaama, a call for “protection and calm.” In Guugu Yimithirr law, no blood was to be spilt on Waymburr, the land on which Cook had come ashore and fired his musket.

At last it was possible to understand the old man’s gesture of reconciliation from the perspective of the Guugu Yimithirr; it was a request for his law to be honoured and calm to be restored. For Alberta and Loretta, the story represents an inspiring moment of reconciliation; an historic moment in the history of this continent.

I have written a series of blogs on the time that Cook sailed along the eastern seaboard of Australia, at: