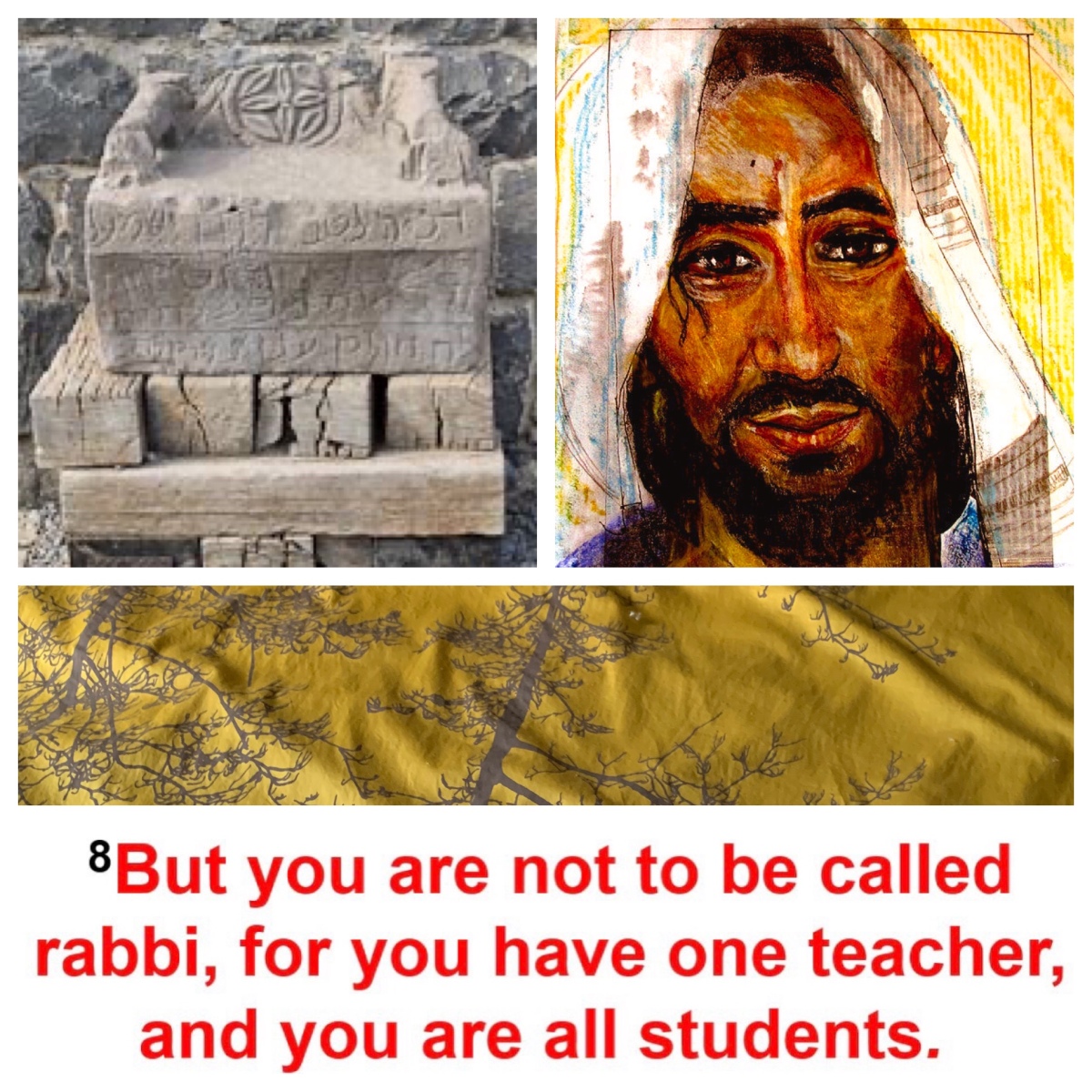 “The scribes and the Pharisees sit on the seat of Moses; therefore, do whatever they teach you.” So Jesus instructs his followers, according to a teaching reported only in the book of origins, which we know by tradition as the Gospel according to Matthew.

This teaching comes at the start of a lengthy chapter (Matt 23), where Jesus does two important things. He reinforces the central significance of the Law of Moses which was taught by the scribes and the Pharisees. At the same time, he criticises the practices of those scribes and Pharisees, for again and again they fail (in the view of Jesus) to put into practice what they teach. Slightly modifying the end of verse 3 results in the familiar proverb, “practice what you preach”.

The chapter closes with a plaintiff lament, as Jesus closes his speech: “Jerusalem, Jerusalem, how often have I desired to gather your children together…but you were not willing” (23:34-39). Jesus yearned for the salvation of his people; but, being led astray by teachers who do not practice what they preach, the people are heading to their doom.

The first thing that Jesus does is affirm the importance of the Law which is taught by the scribes and the Pharisees. He instructs his followers to “do whatever they teach you” (23:3). Their authority is grounded in “the seat of Moses” from which they teach (23:2). Jesus speaks as a faithful Jew, holding firmly to the commandments of the Law, living in accord with the covenant relationship with God.

The Pharisees were scribes who specialised in the interpretation of Torah and in the application of Torah to daily living. In contrast to the priestly Sadducees, the Pharisees were very popular amongst the ordinary Jewish folk. This may well have been because they undertook the highly significant task of showing how the Torah was relevant to the daily life of Jewish people.

The story of Ezra, told in Nehemiah 8, gives an example of this in practice, referring especially those who “helped the people to understand the law” (Neh 8:7). Whilst the priests upheld the Torah as the ultimate set of rules for operating the Temple, the Pharisees showed how the Torah could be applied to every aspect of daily life as a Jew.

Most Jews went to the Temple only rarely—and found it to be an expensive enterprise when they got there! But in seeking guidance for daily life, the people were greatly helped by those skilled interpreters of Torah, the scribes and the Pharisees. Josephus comments that the Pharisees were usually held in high regard by the ordinary people of the day.

Since nine out of every ten persons could not read, the importance of scribes —literate, educated, and sympathetic—could not be underestimated. Whilst the Pharisees clustered around towns in Judea, the scribes were to be found in the synagogues of villages throughout greater Israel, and indeed in any place where Jews were settled.

The task of the Pharisees was to educate the people as to the ways of holiness that were commanded in the Torah. It was possible, they argued, to live as God’s holy people at every point of one’s life, quite apart from any pilgrimages made to the Temple in Jerusalem.

The Pharisees thus held sway in the synagogues, in all the places where dispersed Jews were living. Their interpretations were highly regarded amongst the people. But they stand as the chief sparring partners for Jesus, reflecting the competing claims for authoritative teaching about the Law.

2. Jesus, the Authoritative Teacher of the Law

Jesus regularly debates with the scribes and the Pharisees about their interpretations of the Law. He berates them for their failure to keep the Law in their daily lives. This chapter brings those vigorous debates to a climax.

As Matthew writes his Gospel, he intensifies the way that Jesus was in competition with the Pharisees, and takes pains to present Jesus as the one who provides the best and most accurate interpretation of the Law. We see this very clearly in this passage, where Matthew has Jesus declare, “you have only one teacher” (23:8), and then, even more pointedly, “you have one instructor, the Messiah” (23:10).

The motif of Jesus as the authoritative teacher of the Law has sounded throughout this Gospel. Only in this Gospel do we hear Jesus unambiguously declare that he comes to fulfil the Law (5:17-20), and then go on to provide his understanding of particular laws (“you have heard it said … but I say to you …”, 5:21-48).

Indeed, in this series Jesus employs a classic method from Jewish halakhic debate. (Halakha is a Hebrew word which literally means “walk”; it is used in a metaphorical sense to indicate the way to walk in life. It almost always describes debates which focus on the interpretation of the 613 commandments found within Hebrew scriptures.) The techniques of halakhic debate were known and used at the time of Jesus. He quotes a Pharisaic interpretation (“you have heard it said”), but then places alongside it his own interpretation (“but I say”). Jesus operates as a teacher of the Law.

The collection of sayings which we call “the Sermon on the Mount” ends with the affirmation that Jesus “taught as one having authority, and not as their scribes” (7:29). The instruction of Jesus to “take my yoke upon you and learn from me” (11:29) draws on the concept of “the yoke” as the teachings of a rabbi (see Mishnah, Sayings of the Father 3.5).

The parables of Jesus are offered as teachings about “what has been hidden from the foundation of the world” (13:35, quoting Psalm 78:2, a lengthy teaching psalm). And at the end of this Gospel, Jesus finally commission his disciples to “teach [the nations] to obey everything that I have commanded you” (28:19).

In the book of origins, therefore, Jesus is The Authoritative Teacher, the one who instructs most accurately and faithfully in the Law, using the techniques of Jewish teachers.

The second thing that Jesus does in the passage in the lectionary this Sunday is criticise those who teach the Law but do not (in his view) live by the Law. They say the right things, but their actions fail to bear this out—a familiar criticism in the book of origins, where Jesus taught that not everyone who says the right things will enter the kingdom, “but only the one who does the will of my Father”(7:21), and which includes a parable about “doing the will of God” as the prerequisite for entering the kingdom (21:28-32).

The following verses offer a fulsome list of the inadequacies and failures in the way that the scribes and Pharisees live: they impose heavy burdens (23:4), make public displays of their faith (5), seek the place of honour at feasts (6), and flaunt their status (7). The series of woes likewise criticises the scribes and Pharisees for keeping people out of the kingdom (23:13), praying at length (14), making converts (15), misuse of oaths (16), misdirected tithing (23), greed and self-indulgence (25), hypocrisy and lack of faithfulness to the Law (28), and hypocrisy in relation to the prophets (29-30).

Jesus is critical of those who do not keep the Law. He condemns them” “go away from you, you who are without the Law” (7:23) and says that those who dot keep the Law will be “thrown into the furnace of fire” (13:41). The end time includes “the increase of lawlessness” (24:12). And he specifically describes the scribes and the Pharisees as being “full of hypocrisy and lawlessness” (23:28).

Time after time in this speech, the scathing rhetoric of Jesus indicts the teachers of the Law with their failure to adhere to the Law. Eight times he says that they are hypocrites (23:13, 14, 15, 23, 25, 27, 28, 29). The deduction to be drawn is clear: if those who teach the Law in the synagogues cannot be trusted, because they do not follow the Law in their lives, then whose teaching of the Law should be trusted?

4. Criticising the Teachers of the Law

Later in his Gospel, Matthew has Jesus intensify and personalise his rhetoric, by applying it specifically and insistently to the “scribes and Pharisees” in this collection of woes (23:13-36). If we include the woe of verse 14 (which is missing in some early manuscripts), there are eight woes in this final teaching section of the Gospel—providing a perfect counterpoint to the series of eight blessings offered by Jesus in his first substantive teaching (5:1-12, at the start of the “Sermon on the Mount”).

These woes, carefully shaped by Matthew out of the various traditions available to him, appear to slander the scribes and Pharisees to such an extent that they have fuelled explicit anti-Semitic acts, and contributed to the more insidious stereotyping of “Pharisaic” attitudes, throughout much of subsequent history.

However, we need to read these woes in the literary and historical contexts, which can provide a different view of their purpose when first written. In antiquity, “the rhetoric of slander” was not so much a way of attacking others, but a means of establishing the self-identity of the writer’s community. It often had more to do with solidifying one’s own position, than with undermining another position.

Widespread use of such language mitigates against interpreting the woes of Matthew 23 in such a stringent and limiting fashion; in the context of its day, its effect was to define the identity of the Matthean community over and against the Pharisaic leaders, rather than to belittle them for the sake of spite or malice.

This series of woes culminates the debates with Pharisees which Jesus has been involved in throughout this Gospel. Each of the woes is a debate over the way in which a particular law should be applied. In this way, the woes repeat the emphasis of the Sermon on the Mount: what is most important is single-minded devotion to the principles set forth in the Law, and an intention to live by these precepts in all of life—both in actions and in attitudes.

This blog draws on material in MESSIAH, MOUNTAINS, AND MISSION: an exploration of the Gospel for Year A, by Elizabeth Raine and John Squires (self-published 2012)