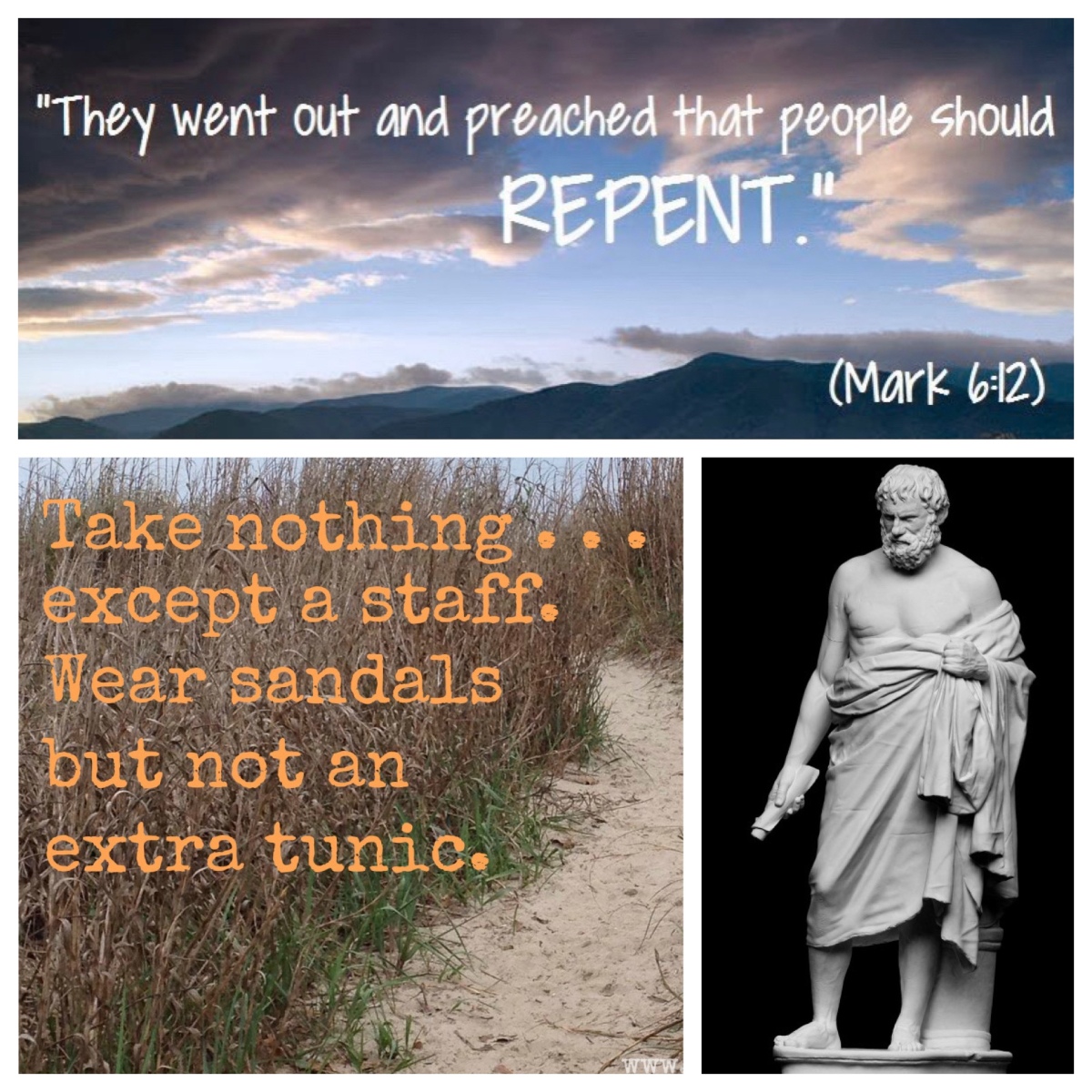 Mark’s Gospel emphasises the necessity of faithful discipleship; “follow me” is an important refrain from the beginning of Mark’s story. In three early scenes, the command of Jesus, “follow me”, is met each time with an immediate response: Simon and Andrew follow him (1:17), then James and John follow him (1:19), and then Levi the tax collector follows him (2:14). Each leave what they are doing and follow Jesus.

These scenes set the pattern for the rest of the narrative bout the beginning of the good news of Jesus the chosen one: Jesus challenges people to respond to him with an active, informed discipleship; to leave the comfort of the familiar and set out following him. He reiterates the call, “follow me”, in later scenes (8:34; 10:21).

The disciples in the narrative of Mark’s Gospel readily demonstrate this response. The disciples, and indeed a larger crowd, did indeed follow Jesus in his journeys around Galilee (2:15; 3:7; 5:24; 6:1; 10:28, 32, 52) and then southwards towards Jerusalem (11:9). Indeed, a group of women who followed him in Galilee continue all the way to Golgotha, watching from a distance as he dies (15:41).

But following Jesus is not just about walking along beside him. The Gospel account makes it clear that followers are to step beyond Jesus, to walk out ahead of him, into unchartered territory. Following Jesus (discipleship) involves being sent forth (mission). And Jesus does this very thing with his followers. He sends them out, on mission.

On the very first occasion when Jesus gathers all twelve apostles together, he gives them a twofold commission: “he appointed twelve … to be with him and to be sent out to proclaim the message and to have authority to cast out demons” (3:14–15). To be with him, following as disciples; and to be sent out, engaged in mission.

As the Gospel then reports how Jesus speaks and acts, the meaning of this discipleship and mission is spelled out. The apostles—and other followers—have the opportunity to learn from his teachings and to witness his actions while they are with Jesus, and then to replicate these teachings and actions through their presence in other places.

“Proclaiming the message and casting out demons” is how the activities of Jesus are characterised from the start of the narrative (1:39). His earliest message was clear: “the kingdom of God is at hand; repent, believe the good news” (1:15). His activity, also, was striking: he rebukes unclean spirits (1:23–26), “healed many who were sick with various diseases, and cast out many demons” (1:34).

These same activities form the basis for the work of the twelve as they leave Jesus and undertake his mission in the wider community (6:7–13). In this enterprise of mission, the disciples model their words and deeds on Jesus: “they proclaimed that all should repent…they cast out many demons and anointed with oil many who were sick and cured them” (6:12–13).

As they undertake this mission, the followers of Jesus are to be characterised by an ascetic mode of dress (6:8–9) as they undertake their public proclamation (6:10–11). Both elements deserve careful attention.

“He charged them to take nothing for their journey except a staff—no bread, no bag, no money in their belts— but to wear sandals and not put on two tunics.” So Jesus instructs his followers (6:8–9). In the parallel passages for this incident, Jesus is even more strict. In Luke, he prohibits sandals as well (Luke 10:3), and in Matthew, he prohibits both sandals and staff (Matt 10:10)

The description of the mode of dress for the followers of Jesus given here is often compared with the form of dress of a wandering philosopher, particularly of a Cynic philosopher.

There are many stories told about Diogenes’ rebellious and nonconformist character. Those who promulgated his philosophy of life, called Cynicism, lived equally simple, basic lives. Sandals, a staff and a cloak characterised many of them (although it seems that a double cloak was worn by many).

Was Jesus telling his disciples to emulate the Cynic philosophers? They were itinerants, travelling from town to town, speaking their views with frankness and then moving on to the next town or village. The followers of Jesus were also to be itinerant, travelling from place to place, boldly proclaiming their message, and staying nowhere for too long.

The second century document, The Didache, clearly instructs followers of Jesus not to remain for more than two or three days in any one place (Didache 11–13). Jesus here is a bit more lenient; he doesn’t set a time limit, but instructs his followers to move on if they meet resistance. In this way, still, they were to emulate Jesus, as “the Son of Man who has nowhere to lay his head” (Matt 8:20; Luke 9:58).

It’s not at all clear that Jesus knew Cynic philosophy; the evidence of Cynic activity comes from places outside Israel. The Cynics were active long before Jesus, but continued on into his time, and beyond. Diogenes lived four centuries before Jesus, and adherents to his type of philosophy are known three centuries after the death of Jesus.

In his 32nd Oration, Dio describes the typical Cynic: “posting themselves at street-corners, in alley-ways, and at temple-gates, [they] pass around the hat and play upon the credulity of lads and sailors and crowds of that sort, stringing together rough jokes and much tittle-tattle and that low badinage that smacks of the market-place.”

Dio’s criticism continues: “they declaim speeches intended for display, and stupid ones to boot, or else chant verses of their own composition, as if they had detected in you a weakness for poetry. To be sure, if they themselves are really poets or orators, perhaps there is nothing so shocking in that, but if in the guise of philosophers they do these things with a view to their own profit and reputation, and not to improve you, that indeed is shocking.”

For Jesus to be calling his followers to a way of life that could be seen as comparable to this way of living, would be quite a challenge—and quite a shock.

Indeed, there may be a sign of differentiation from the Cynics. The Stoic philosopher Epictetus is reported as saying that the features which distinguish a Cynic are “his provision-bag (peran) and his staff and his big mouth” (Arian, Discourses of Epictetus 3.22.50). Jesus states that his followers should carry a staff, and speak their message—but here he prohibits them from carrying a provision-bag (peran, 6:8).

Another point of differentiation may be the command not to put on two tunics (6:9). The Greek word used is chiton. The chiton was a knee-length tunic worn as an undergarment; Josephus reports the common practice of wearing two chitones when travelling (Antiquities 17.136).

Musonius Rufus (Epistle 19) notes that Cynics typically wore two tunics—a tribon over their chiton. The tribon was a more humble garment than a chiton, so the outward appearance projected by a Cynic would have been, quite deliberately, that of a person of very lowly status. But for Jesus, the direction to wear only one tunic reflects an even more ascetic mode of living.

Was Jesus deliberately projecting an image—and a reality—deliberately differentiated from the Cynics? Certainly, direct contact by Jews with wandering Cynic philosophers was most likely reasonably rare. And I think that Jesus isn’t advocating specifically that his followers emulate the Cynics.

Jesus has his own reasons for the call he makes. Being on the move and not tied down to one place, and living simply without all the extraneous baggage, reflected an ethos that Jesus wished to cultivate. The focus was to be on the message and the key actions of the disciples, not on any extraneous or additional elements.

Perhaps what is in mind here is the Exodus story, in which the Israelites prepare themselves to be on the move, with minimal complications. They are to wear their clothes (which lasted them the whole time—Deut 8:4, 29:5). They are to fasten their belt and carry their staff (Exod 12:11), and wear their sandals (Exod 12:11; Deut 29:5). They are to take no bread—God will provide in the form of manna and quail, falling from heaven.

The attention of the disciples, as they engage in mission, proclaiming the message, healing, and casting out demons, is to be directed entirely to the task at hand. They are directed away from carrying too many accoutrements, worrying about provisions, and to focus on the task of proclamation and healing. In this way they are to follow the example and pattern of Jesus.