Last year, Elizabeth and I visited a site in southwest WA, where the remains of some ancient Aboriginal fishtraps could be seen. They were on the shoreline of Oyster Harbour, near the mouth of the Kalgan River just east of Albany. They were built and operated by the Menang people of the Noongar nation.

In 1790, three decades before the British established the Swan River Colony (on the site that is now  Perth), British explorer George Vancouver arrived on the southern coast of Western Australia. Despite naming King George Sound, various inlets and bays, and mapping the area, he did not encounter any Noongar. But he reported evidence that Noongar were there.

Vancouver wrote that he found a “native village; fresh food remains near a well-constructed hut; a kangaroo that had apparently been killed with a blow to the head; a fish weir across what is now called the Kalgan River; and what appeared to be systematic firing of the land.” (This citation is sourced from https://www.noongarculture.org.au/wagyl-kaip-timeline/)

The traps (one of which is pictured above, from our visit in 2018) were constructed by the Menang peoples and are dated at over 7,500 years old. As the tide moved out, the fish would be stranded inside the courses of the stones, which were topped with brush, then collected at low tide. They provided food for the regular gatherings of the peoples each year.

There are eight separate weirs shaped as crescents, each of which is believed to consist of thousands of stones. They are now protected under local indigenous oversight. They are an amazing testimony to the ancient skills of the Menang people.

These fishtraps are one part of the evidence which demonstrates that the Aboriginal people were not “primitive nomadic hunter-gatherers”, but rather, settled people, who cared for country and developed the technology which enabled them to build structures which assisted them in harvesting the natural resources of the land.

Western society has done the same, and we congratulate ourselves on our technological capacities. This evidence indicates that Indigenous peoples had done this very thing, many thousands of years before “Western civilisation” had developed.

These fishtraps were obviously sustainable. They lasted over thousands and thousands of years, being used to catch regular harvests of fish. The Menang people came back each year to gather what they needed, and then allowed the fish to replenish. Would that our modern ways showed the same, respect to the land and its rivers, and that we farmed and harvested in a sustainable way.

We can learn from the land, by attending to features such as these, and reflecting on what they tell us about the First Peoples of this continent, who have lived here for millennia—and pondering how we, today, might relate respectfully to the land, care for the creation, and live in ways that are sustainable.

I recently read a fascinating account of Baiame’s Ngunnhu [pronounced By-ah-mee’s noon-oo]. These are stonewall fishtraps at Brewarrina in NSW, created by the Ngemba people. They are similar in technology and purpose to the ones we saw in WA. (See https://newmatilda.com/2019/02/05/australia-one-oldest-human-made-structures-earth-meh-nmfhpotae/)

These fishtraps are possibly the oldest known human-made structure on earth. The Australian Government’s National Heritage Register notes, “The structure of the Ngunnhu demonstrates the development of a very efficient method for catching fish involving a thorough understanding of dry-stone wall construction techniques, river hydrology and fish ecology.” 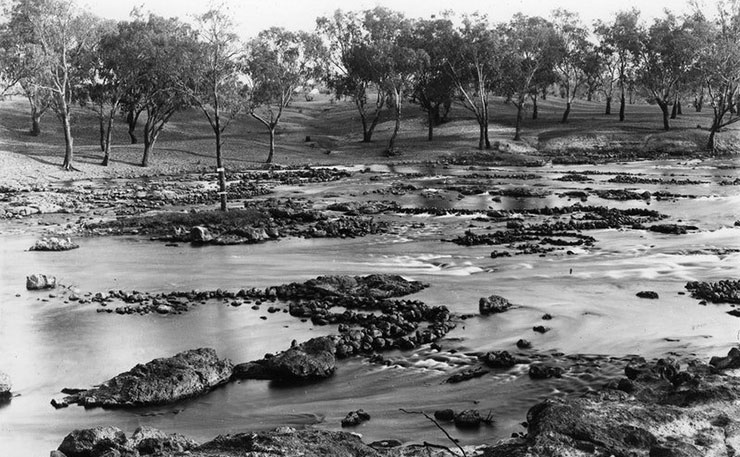 You can find a discussion of these fishtraps and many other such ancient Indigenous features, in Dark Emu: Black Seeds: Agriculture Or Accident? (Magabala Books, 2014), by Bruce Pascoe.

There is an excerpt from Dark Emu, with a description of how the fishtraps were worked, at https://www.foreground.com.au/environment/decolonising-agriculture-bruce-pascoes-dark-emu/, and there is a fascinating discussion of Pascoe’s book, some related works, and the implications for modern agricultural practices, at https://theconversation.com/friday-essay-dark-emu-and-the-blindness-of-australian-agriculture-97444

Debate concerning the age of this particular construction, the Ngunnhu, is not settled; it may well be up to 40,000 years, which would make it more than 10 times older than Stonehenge!  That is certainly worth honouring, and protecting.

The National Heritage Register also notes that this location, in Brewarrina, was the place where people from the various indigenous groupings of the area could draw their own supply of fish on a regular basis, and where they would all meet together, on a regular basis, to celebrate, and to trade.

It notes: “While the Ngemba people are the custodians of the Ngunnhu, it was Baiame’s wish that other tribes in the region, including the Morowari, Paarkinji, Weilwan, Barabinja, Ualarai and Kamilaroi should use it in an organised way. He allocated particular traps to each family group and made them responsible under Aboriginal law for their use and maintenance.

“Neighbouring tribes were invited to the Ngunnhu to join in great corroborees, initiation ceremonies, and meetings for trade and barter. The Ngunnhu were, and still are, a significant meeting place to those Aboriginal people with connections to the area and continue to be used.”

So, as well as a sustainable lifestyle, the Ngunnhu demonstrate how different groups can live together peaceably and co-operatively, sharing natural resources, and enjoying respectful relationships with each other. That, surely, is another lesson that we can learn!

2 thoughts on “Learning from the land (4): Naiame’s Nghunnhu—fishtraps at Brewarrina”