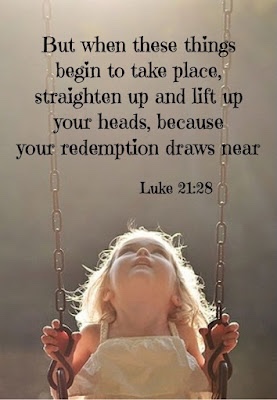 At this time of the year, every year, the Revised Common Lectionary offers us some passages from the Gospels that are strikingly vivid and dramatic. Each year we end “the church’s year” with an excerpt from the long apocalyptic speech that Jesus delivered to his disciples, some time after they had arrived in the city of Jerusalem. This year, a couple of weeks ago, we read Mark 13:1–8, with the striking line, “this is but the beginnings of the birthpangs”.

Also, each year, the church’s “new year” begins with an excerpt from the same speech—usually from later in the speech—and from another Gospel (whatever is the Gospel for that new year). This time around, as we move from The Year of Mark into The Year of Luke, we read Luke 21:25–36, with the equally striking claim, “when these things begin to take place … your redemption is drawing near”, in the first week of the new church year.

This long speech that Jesus gives (reported with slightly different variations in Mark 13, Matt 24, and Luke 21) is a striking speech, with vivid language and dramatic imagery, drawn from the traditions and patterns that are found in the increasingly apocalyptic fervour of prophetic oracles delivered through the history of Israel. The apocalyptic character of the speech means that it certainly makes a mark!

Indeed, this speech confirms the thoroughly apocalyptic character of the teaching of Jesus, right through the Gospel accounts. His parables about the kingdom are apocalyptic, presenting a vision of God’s promised future. The call to repent is apocalyptic, in the tradition of the prophets. The demand to live in a way that exemplifies righteous-justice stands firmly in the line of the prophetic call. Such repentance and righteous-just living is as demanding and difficult as giving birth can be.

“Apocalyptic” comes directly from the Greek language—the language in which the words of Jesus are first recorded, in the Gospels. It means an uncovering, a revealing, a making clear—in other words, a revelation. In Greek, the title of the book of Revelation is “Apocalypsis”. So an apocalyptic message is one that uncovers or reveals what lies ahead, in the plan of God.

Jesus was, indeed, a prophet of apocalyptic intensity. But how do we make sense of this dramatic language in the context of the post-Enlightenment scientifically-aware world of the 21st century? How do visions of turmoil and warfare, oracles about fiery destruction and fierce retribution, relate to our contemporary world?

One way of understanding this kind of language and these kinds of speeches, whether by Jesus or any number of the prophets, is to claim that these words were spirit-inspired predictions, from long ago, of the turmoil and conflict that was to take place in the future. These words may relate to the times immediately in the future of the writer (in the late 1st century in the case of this Gospel passage). Or they may point forward in time, to events well beyond the time of the reader, even into our own times (that is, the 21st century).

Like the final book in the New Testament, Revelation, this speech of Jesus in Mark 13 has been interpreted by fervent believers throughout the centuries as providing evidence that the end of the world was at hand. “Repent, now” is the message that is proclaimed—repent, before the end comes, and it is too late.

Another line of interpretation holds that this kind of language needs to be understood as inspired scripture, which provides us with clear doctrinal statements about what is called “eschatology” (the study of the end times, the last days). If this were the case, the words of Jesus could be mined as a source for teachings about “the last days”, instructing us so that we are aware and informed. It may not be that we are right in the midst of those “last days”, but we are able to interpret and understand what is happening—to know exactly where we are, now, in the alleged timetable of events leading up to “the last days”.

However, there are difficulties with both lines of interpretation. Neither understanding actually reflects the nature of the literature, nor the purpose for which each of the apocalyptic oracles and speeches were given in their own time. It is important to understand the literary nature of apocalyptic writings, as well as the social-historical context in which such works came into being. The same applies for Mark 13.

There are three key apocalyptic elements that help us to “make sense” of the intensely dramatic, vivid language that Jesus uses. The first is that we need to be clear about the historical context within which this Gospel was written. The author of this work was writing in a context fraught with tension, conflict, and bloodshed. Israel had been under foreign occupation for centuries. From the time that Roman troops had occupied Palestine, in 63 BCE, tension and conflict had grown.

In the year 66 CE the governor, Florus, demanded money from the Temple treasury in Jerusalem. This was too much for some Jews; hostilities broke out in various places across Palestine. The war which resulted lasted eight years; in 70 CE, the Temple in Jerusalem would be burnt to the ground, and by 74 CE, all active Jewish resistance to the Romans would be quashed.

In this setting, amidst the battles fought in Galilee, Samaria and Judaea, apocalyptic hopes were inflamed. Many of the Jews actively fighting the Romans believed that their actions would help to usher in the long-promised kingdom, in which God would reign over Israel and foreign troops would be banished. Perhaps a significant number of the followers of Jesus also believed that the kingdom of God was drawing near, as Jesus had proclaimed some decades earlier, in the events of their own day.

Should the followers of Jesus, then, join with the rebel groups in rising up against Rome? Was the way to the kingdom to be won through conflict, martyrdom, and military victory? Or was there another way? In this context, one writer chose to answer these questions by writing a whole story in which he remembered what Jesus said about how people were to follow him. We call this work the Gospel of Mark.

Some decades later, it had become clear that this uprising did mark the end of Jewish practices in Jerusalem (the Romans had expelled Jews from the city and renamed it with a Roman name). The Romans had won the war, and their grip on,power was unshakeable. (Their Empire would continue to expand for some centuries to come.)

So as Luke writes his account of Jesus, a few decades after Mark, he has to come to grips with the fact that “the end” did not, indeed, come with these events. God did not intervene. Life continued on under Roman rule. So whilst Jesus is remembered for his apocalyptic fervour—Luke maintains the structure and content of the speech found in Mark, with a number of variations—the message of Jesus is put into a different context, with an emphasis on the fact that ongoing faithfulness, and bearing witness to that faith, was to be a key marker.

Luke, even more than Mark, backs away from having Jesus call for a radical uprising. Luke intensifies the Markan call to discipleship, and throughout this Gospel he provides still more examples that indicate that Jesus is calling for faithful following of the way that leads to the cross. The initial apocalyptic fervour of Jesus is somewhat muted in this later account; but the cost of discipleship and the urgency of the call to follow remains strong.

… to be continued in a subsequent post; see https://johntsquires.com/2021/11/22/be-alert-at-all-times-praying-that-you-may-have-the-strength-to-stand-before-the-son-of-man-luke-21-advent-1c/