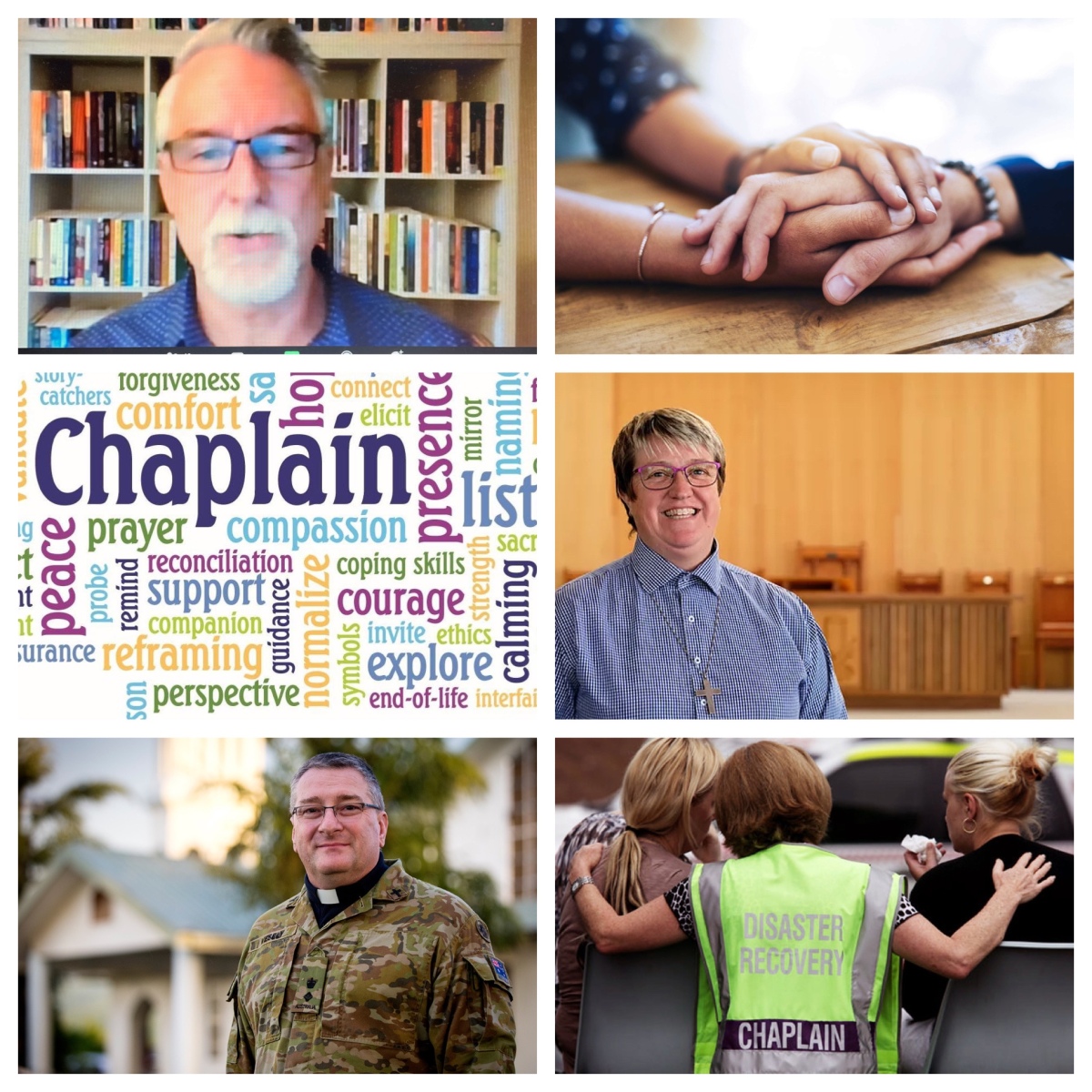 The November 2021 meeting of the Canberra Region Presbytery of the Uniting Church in Australia met on 20 November. We had identified that the focus for the meeting would be Chaplaincy. Across the Presbytery, there are nineteen people (stipended, salaried, or volunteers) in ministry in hospitals, prisons, universities, and aged care centres, as well as community chaplaincy, disaster chaplains (on standby), and defence force chaplains.

Jean Shannon, the minister in placement with the Sapphire Coast congregation, began the meeting with a very pertinent devotion. Jean has previously served as a chaplain to the Canberra Hospitals, and as an ordained Deacon, has a strong commitment to ministry beyond the gathered community of faith, in the wide community.

In opening the meeting with a devotional reflection, Jean offered some thoughts about her understanding and practice of chaplaincy. She noted that chaplains “hear the small voices and see the invisible ones”. She went on to claim that the fundamental element in the act of listening, for a chaplain, is not so much to hear the voice of the person speaking, but “to listen for God—to listen for your God”.

Andrew Mead is the chaplain to the Canberra Hospitals; he was invited to offer a keynote address on Chaplaincy to the meeting. Andrew made reference to the contributions on their particular form of chaplaincy that many of the chaplains in the Presbytery have made, in their articles that have been collected in the most recent issue of Viewpoint, the Presbytery magazine.

In speaking about chaplaincy, Andrew identified that it has both a pioneering role, moving beyond the space occupied by the congregation; and a representative role, firmly connected to the life of the church, not independent of it.

Andrew noted that chaplaincy exists simply to offer an experience of the good news of Jesus Christ through relationships with people. It is a calling to be a sign and instrument of the reign of God instigated by Jesus, demonstrating a realm of love, reconciliation, and justice (drawing, here, on words from the UCA’s Basis of Union).

Chaplains, said Andrew, do not change the world; rather, they make an impact on people, one by one, through their caring, listening, and relationship building. The hope is that such relationships make a difference in ways that matter, as individual transformations build into communal change.

Andrew noted that organisations which have chaplains expect well trained, credentialed ministers, consistent with the expectations of other positions, who are also well-attuned to the spiritual dimensions of life. Thus, chaplains need to be both formed for ministry by the church and equipped for work within the formal structures of their employing organisation.

Andrew offered the picture of a chaplain as an icon: a visible representation of the spiritual dimension of human life, literally embodied in the being of the chaplain. When a chaplain is present with a person, there is the possibility that such a deeper insight might emerge for the people that are being engaged by the chaplain.

Within the Presbytery, work has been underway to provide a longer-term, substantial response to the impact of the bushfires of 2019–2020 in the south coast region that is served by the Presbytery. A position description has been approved for a South Coast Community Chaplaincy role, hopefully to commence in early 2022. Funding for this position has come from the Moderator’s Appeal fund, as well as the Mount Dromedary Parish, two other Congregations within the Presbytery, the Presbytery itself, and some individuals wishing to support this ministry.

Andrew noted that governments now recognise the value that is provided by “non-clinical mental health support”, and so this opens the way for such a form of community chaplaincy as is being proposed. It is a good recognition of the value of “religious services” or “spiritual resources” in a society that some say is becoming more secular and opposed to religion. In this instance, the opening for ministry is significant.

What does a chaplain offer? The art of being present, in peace and steadiness, is a gift to people in need; the chaplain offers an anchor in the midst of all that is going on. Calming the mind and spirit, fostering a quiet which can end the inner clamour, and offering a non-anxious presence in the midst of anxiety, are all deeper dimensions that chaplaincy can offer.

Chaplains seek to listen deeply, to hear the sources of resilience and wellbeing within the other person, accepting them just as they are, allowing these elements of the person’s inner strength to emerge in their own time. Chaplains seek to enliven the biblical stories as myth and symbol, to resonate with our spirituality. As relationships are built, a ripple effect can be seen from the work of the chaplain outwards to others.

During COVID, Andrew noted that some chaplains were refused entry to their institutions, and told to go home. For others, they were part of a small group of people permitted entry to offer care. In hospitals, the sense of suffering has been amplified and magnified for patients and their families. The impact on staff has been huge; there has been a slow erosion of the resilience of staff, eating away over 20 months of intense crisis. Andrew recounted a recent time which was, for him, the most critical experience of crisis that he has had in years of chaplaincy.

In such contexts, chaplains connect with human need in unexpected ways, maintaining the affirmation of the Gospel, as expressed in John 1: “the light shines in the darkness, and the darkness has not overcome it”.

Presbytery Co-chairperson, Ross Kingham, then invited people in the session to a time of prayer, noting the intense cost of pain bearing, as carers carry much in them selves as they relate to those they encounter.

Members of the Presbytery were given time in small groups; each one was focussed on a different form of chaplaincy: hospital, prisons and indigenous, university, aged care, community and disaster response, and defence force chaplaincies. Reports back from these groups showed a strong commitment to ensuring the presence of the church, and of spirituality, in each of these contexts.

Chaplains engage with the emotional needs of hospital patients and visitors—and staff. They bear the pain of people and offer the hope of the Gospel. They relate to people undergoing major and significant life changes in aged care, and walk with them on that journey. They provide friendship to students in a new and unfamiliar university environment, as well as engaging with the intellectual curiosity of students as they explore religious issues.

Chaplains in defence settings encounter trauma and moral injury. Chaplains in prisons sit with people in major crisis moments, in what may be an alien environment, facing huge personal challenges. And as chaplains in community and disaster response settings enter into relationships, they both respond to immediate presenting needs, often in time-critical ways, as well as ensuring that they are attuned to deeper issues which may manifest as the relationship develops.

The connection (or sense of disconnection) that chaplains may feel in relation to the church as a whole, was one issue that was identified for careful attention.

For myself, as I listened to the devotions, the keynote address, and the reporting-back from the discussion groups, a question formed in my mind. What if all disciples,,whether ordained or lay, saw the importance of exercising a chaplaincy-like “ministry of presence” in their daily lives?

By analogy, we might press the challenge to those faithful people who “belong to church” and faithfully participate in worship on a regular basis. When they come into the gathered community (Sunday worship, Bible Study or fellowship groups), they participate in the ministry of the Word. But that is a relatively small percentage of time for their whole week. Perhaps one hour, perhaps four or five, maybe even ten or so hours—out of 168 hours in every week.

What of the other time during the week? All those people are “in the community”, amongst the scattered community, day by day, in their regular lives. What if each and every disciple of Jesus sought to be that compassionate carer, that non-anxious presence, that listening ear, that relationship-building companion, in ways that invited those people with whom they encounter to see them as “a sign and instrument of the reign of God instigated by Jesus, demonstrating a realm of love, reconciliation, and justice” in the ways that they speak, act, and relate to those people.

And—lo and behold—one comment towards the end of the report-back session made exactly that same point! As disciples, we are called to be chaplains—to live the love of God, to enact the justice of God, each and every day.