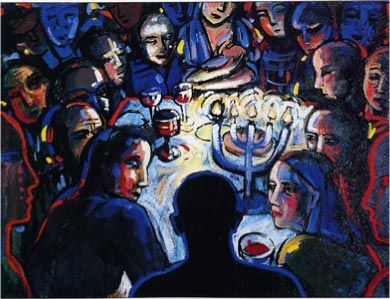 1 The positive practices of Jesus

Whilst the norm in Jewish society was that men did not speak to women in public, in John 4:5-9, 25-27 and other places we find that Jesus talked with women. Jesus encouraged women to be part of his inner group. Luke 8:1-3 indicates that the women ministered to Jesus as a part of his inner group of disciples. The word used to describe this support (diakoneo) is used as a technical term for a ministry role in the Gospels and the letters of Paul.

Jesus also commended women when it seems that the Law would not explicitly support their actions. In Luke 8:42-48, he commended a woman (unnamed) who was (according to Leviticus 15:25-30) ceremoniously unclean. In Luke 10:38-42, although Mary was doing something not at all traditional for women, Jesus commended her for sitting at his feet to learn from him.

At the last supper, women as well as men were present. If it was a Passover meal (as the Synoptic Gospels claim), then it was a family affair, with women as well as men present at the table for the festive celebration. Australian artist Margaret Auckland has created a wonderful artwork that depicts what the scene might have been like.

Mary Magdalene is a key woman amongst the followers of Jesus. There’s a good summary of the key things to know about her at https://juniaproject.com/mary-magdalene-5-things-should-know/

James Tabor advocates an intriguing hypothesis, through examining the “anonymous women” in the Gospel of Mark, at https://www.biblicalarchaeology.org/daily/the-three-most-important-women-in-marks-gospel-all-unnamed/

In Luke’s Gospel, the motif of faithful men and faithful women is heightened. Luke’s distinctive beginning to the story of Jesus introduces us to two faithful pairs: Zechariah and Elizabeth (1:5–25, 57–80), and Simeon and Anna (2:25-38), as well as to Mary, “the servant of the Lord” (1:38).

In Luke’s version, Peter’s betrayal of Jesus is interpreted as having been forced by Satan (Luke 22:31); the Markan comment that the men deserted him is omitted; and those who watched from afar include both genders: “all his acquaintances, including the women” (Luke 23:49).

In his account of Jesus’ preaching and teaching, Luke intensifies the theme of the faithfulness of women which was available to him in his sources. To the Markan account in which Jesus blesses an ill woman for her faith (Mark 5:34; Luke 8:48), Luke adds a similar commendation of another woman (7:50).

Only Luke specifically notes that in the early period of Jesus’ public activity, women travelled around with the group of male disciples of Jesus (8:1–3). Only Luke tells the story of Mary and Martha, sisters who gave Jesus hospitality, and of Jesus’ commendation of Mary for her desire to learn from Jesus (10:38-42). See https://johntsquires.com/2019/07/15/listening-and-learning-at-the-feet-of-jesus-luke-10/

In the Acts of the Apostles, this strand of female faithfulness continues. The spirit is poured out upon males and females alike (Acts 2:17-18). Amongst the significant women who are presented as positive models of faithfulness, we find Tabitha in Joppa, a woman “full of good works, acts of charity” (9:36) and Mary, in whose house the believers meet in Jerusalem (12:12)

As Paul travels, he encounters Lydia in Philippi, who likewise provides hospitality to Paul and his companions (16:15); Priscilla, who with her husband, Aquila, teaches Apollos in Ephesus (18:26); and the four female prophets in Caesarea (21:9). Each of these women, we must conclude, exercise a leadership role in the early church. Some additional faithful women are noted amongst the converts in Antioch (13:50), Thessalonica (17:4), Beroea (17:12) and Athens (17:34).

When Jesus, early in his public activity, refers to the anonymous widow from Zarephath in Sidon (Luke 4:26) and the named male from Syria (Luke 4:27), he offers prototypes of those who will become faithful followers of Jesus. Both males and females will become disciples of Jesus, and later, members of the early church communities

Discipleship is inclusive in gender terms. Of particular note is the fact that Luke has Jesus explicitly draw attention to a faithful woman in his synagogue sermon in Nazareth, which functions as a manifesto for the whole of the ministry of Jesus. This emphasises that women enjoy equal status within the group of Jesus’ followers.

Some years ago, I gave a series of lectures on this topic, which I have self-published as At Table with Luke: four studies in Luke-Acts, and I have copies available for sale ($10 including postage) if you are interested.

3 The positive practices of Paul

Gal 3:28 is Paul’s statement of principle concerning the relationship of men and women: he believed in equality in practice. See https://johntsquires.com/2020/06/21/pauls-vision-of-one-in-christ-jesus-gal-328-and-the-uniting-church/

Paul put this fundamental principle into practice in his missionary strategy and in the churches which he helped establish. Overall, Paul named ninety individuals associated with his mission – and 20% of these are women. (By comparison, Seneca, in 100 of his letters, named only one woman – as was typical of writers in antiquity.)

In Romans 16, Paul sent greetings to 29 individuals (as well as associated groups such as families/congregations). Of these 29, 10 are clearly females who have leadership roles. Paul worked happily and co-operatively with each of them in his missionary activities.

One of these women was Junia (Rom 16:7). From the 12th century, Junia was considered to have been a male; but prior to this, she was always acknowledged as a female – indeed, as one “esteemed among the apostles” (not “esteemed by the apostles” as older translations usually said).

Another woman was Phoebe (Rom 16:1-2). Two terms are used to indicate her leadership role. The first word, diakonos, is a term used by Paul to describe his own preaching activity. The correct translation should be deacon (not deaconess). The second word, prostatis, can mean “helper” in the sense of a “Girl Friday” – but it can also mean “benefactor” in the sense of one who helps from a position of prestige and power – as can be inferred from its use at Rom 12:8 and 1 Thess 5:12.

The sum total of the above picture is that we can begin to see abundant evidence, both in the ministry of Jesus and within the early church, for practices which place men and women on an equal footing, carrying out the same functions with equal status and responsibility.

More detailed discussion of these three women can be found at these websites:

Phoebe, Prisca and Junia: Three Women in the Eye of the Evangelical Storm

Were Priscilla, Phoebe and Junia friends?

Romans 16: A glimpse into the ministry of women in Pauline churches

A more detailed analysis, by leading scholar Elizabeth Schüssler Fiorenza, can be found at https://wordandworld.luthersem.edu/content/pdfs/6-4_Romans/6-4_Fiorenza.pdf

The discussion is continued in https://johntsquires.com/2020/11/19/women-in-the-new-testament-2-six-problem-passages/