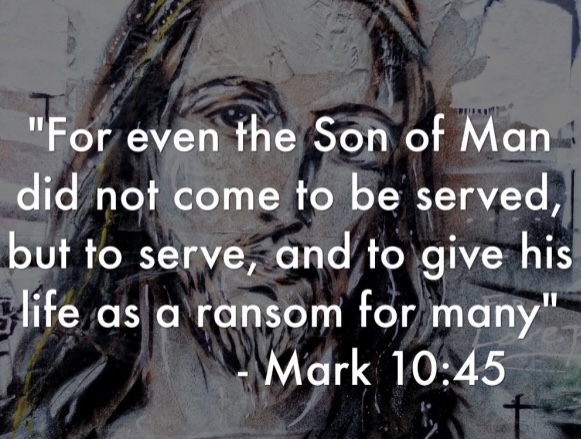 However, in this particular saying, Jesus indicates that the laying-down of his life is to be seen, not just as the model for his followers to emulate, but as “a ransom for many” (10:45). Each word needs some exploration.

Ransom is a term that we associate with the forced kidnapping of a person and the demand for a payment in order for them to be released. This is not the way the term is used in biblical texts, where payment in return for release of a captive is not in view. Rather, the orientation is towards the idea that there is a significant cost involved in the process of ransoming.

The Greek word used in Mark 10:45, lutron, comes from a verb, lutrein, which means “to release”. It was a common term for the payment needed to secure the release of slaves, debtors, and prisoners of war. The noun, translated as ransom, occurs in the Septuagint. It identifies the price paid to redeem a slave or captive (Lev 25:51–52) or a firstborn (Num 18:15). It also indicates the price to be paid as recompense for a crime (Num 35:31–32) or injury (Exodus 21:30). In these instances, it translates the Hebrew word kipper, which has the basic meaning of “covering”, from the root word koper.

Another form of the word koper appears in the name of the Great High Holy Day in Judaism—Yom Kippur, the Day of Atonement (see Lev 16:1–34; Num 29:7–11). On that day, as the cloud of incense covers the mercy seat (kapporeth, Lev 16:13), the mercy seat is smeared with the blood of the sacrificed bull (16:14) and then the blood of the goat which provides the sin offering (16:15). According to Leviticus, it is these actions which “shall make atonement (kipper) for the sanctuary, because of the uncleannesses of the people of Israel, and because of their transgressions, all their sins” (16:16).

The process of atonement in the Israelite religion was to cover up, to hide away from view, the sins of the people. This is developed to some degree in the fourth Servant Song of Deutero-Isaiah, when the prophet honours the servant because “he was wounded for our transgressions, crushed for our iniquities” (Isa 53:5). His life was understood as “an offering for sin” (53:10) which “shall make many righteous” (53:11).

Indeed, as the Song ends, it affirms that “he bore the sin of many” (53:12). The Song resonates with the language and imagery of righteous suffering as the means of dealing with, and perhaps atoning for, sins. In addition, it indicates that this function deals with “the iniquity of us all” (53:6), and through his role, “he shall make many righteous” (53:11); “he bore the sin of many” (53:12).

The notion of one atoning for many is further expounded in a later text which provides an account of the way that a righteous man, Eleazar, was martyred during the time of upheaval under Antiochus Epiphanes (175–167 BCE). The death of Eleazar was understood as a ransom; “be merciful to your people, and let our punishment suffice for them”, he prays; “make my blood their purification, and take my life in exchange for theirs” (4 Macc 6:28–29).

The Greek for “my life in exchange for”, antilutron, is a compound word, joining the same preposition anti and the same noun lutron which we find in Mark 10:45. The preposition clearly denotes a process of exchange, in which one person performs an action on behalf of, or in the place of, another. That notion feeds into a theory of atonement known as substitutionary atonement—that one person (Jesus) stood in place of many people (humanity). However, this isn’t a strong motif in either the fourth Servant Song in Isaiah or in New Testament passages.

However, there has been debate with regard to the word “many” in both the saying of Jesus, and the Servant Song of Isaiah. Does this refer, quite literally, to lots and lots of people, or does it refer to every human being? The way that “many” appears in the Servant Song (Isa 52:14–15; 53:11–12) places it in parallel with “all” (Isa 53:6). Here, the “many” quite clearly has a universal reference, to all human beings.

The interchanging of “many” with “all” can be seen, also, in Paul’s discussion of Jesus and Adam, where “all” (Rom 5:12, 18) and “many” (Rom 5:15, 19) have the same point of reference—the totality of humanity. Indeed, this is consistent with the overall argument running throughout Romans, where the Gospel is a universal good news of righteous-justice for all. (See https://johntsquires.com/2020/07/11/the-righteous-justice-of-god-a-gift-to-all-humanity-romans/) The same universal scope, by analogy from Isa 53 and Rom 5, is applicable to the words of Jesus in Mark 10:45.

In another later Jewish text, Philo of Alexandria observes that “every wise man is a ransom for a worthless one” (Sacrifices of Abel and Cain 121). The idea of an act of one person which serves as a ransom for another then appears in New Testament texts which describe the effect of the death of Jesus for those who have placed their trust in him. Paul uses ransom language tells the saints that they were “bought with a price” (1 Cor 6:20; 7:23).

Paul also uses apolutrosis, a compound word but from the base word lutrein, to describe the redemption which was accomplished by Jesus, both in a formulaic way (1 Cor 1:30) and in a more discursive manner (Rom 3:24; 8:23). The term recurs in later letters which likely were not written by Paul (Col 1:14; Eph 1:7, 14; 4:30), as well as in the Lukan redaction of the final eschatological speech of Jesus (Luke 21:28).

In another later letter attributed to Paul, most likely written by one of his students, we read of “one mediator between God and humans, the man Christ Jesus, who gave himself as a ransom for all” (1 Tim 2:6), using the term lutron. In another later work providing guidance an account of Paul by an author at some remove from him, the book of Acts, Paul was said to have declared of the church that God “obtained [it] with the blood of his own Son” (Acts 20:28).

At the start of the book of Revelation, Jesus is identified as “the one who loves us and released us from our sins” (Rev 1:5). The verb translated “released” or “freed” in English versions is the participle lusanti, from the root verb luō, which is cognate with the noun lutron, meaning ransom.

It was the combination of such passages that led the third century scholar, Origen of Alexandria to develop an idiosyncratic theory of the atonement (the way that Jesus enables God to deal with human sinfulness). Origen’s ransom theory of atonement reads Genesis 3 as an account of Adam and Eve being taken captive by Satan; this state was then inherited by all human beings. The death of Jesus is what enables all humans to be saved; the means for this was that the blood shed by Jesus was the price paid to Satan to ransom humanity (or, in a variant form, a ransom paid by Jesus to God to secure our release).

However, none of these texts—and particularly not Mark 10:45—require this overarching theological superstructure to make sense of what they say. Origen’s ransom theory held sway for some centuries, but was definitively rejected by the medieval scholar Anselm of Canterbury. It is not a favoured theory of atonement in much of the contemporary church (though it is still advocated in various fundamentalist backwaters). Certainly, none of this should be attributed to the saying of Jesus in Mark 10:45. It is far more likely that he is drawing on the Jewish tradition of the righteous sufferer in his words.

To explore the concept of atonement further, there is a very helpful study at https://www.turramurrauniting.org.au/aceaster/ace2main/ace2conv1/ and a clear summary of the seven main theories of atonement at https://www.sdmorrison.org/7-theories-of-the-atonement-summarized/

There is an abridged historical survey at https://www.thegospelcoalition.org/essay/history-theories-atonement/ and another helpful assessment of various theories at https://www.churchtimes.co.uk/articles/2018/29-march/features/features/is-there-one-doctrine-of-the-atonement-ransom-substitute-scapegoat-god