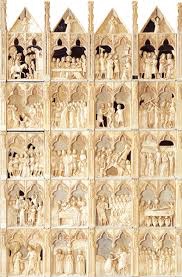 Luke writes his Gospel with purpose, as he indicates in introducing his work (Luke 1:1-4). He describes his book as “an orderly account of the events that have been fulfilled among us”, written to a person named “lover of God” (in Greek, Theophilus). The book was written so that Theophilus might “know the certainty concerning the things about which you have been instructed”.

The author of the Gospel has a clear agenda. He writes this work only “after investigating everything carefully from the very first”, and he underlines the claim that this is “an orderly account” by repeating the phrase (v.1, v.3). The term he uses (taxis, in Greek), was the term used to describe the schematic ordering of works of literature and public orations, in the ancient Greek-speaking world. From this ancient Greek word we get the term taxonomy, the branch of science concerned with classification. (See https://johntsquires.wordpress.com/2019/01/31/an-orderly-account-a-quick-guide-to-luke-and-acts/)

When we read Luke’s account of the passion and resurrection of Jesus, and compare this with the version given in Mark’s Gospel, we can see how Luke re-organises and schematises his material. He follows Mark’s account of Jesus’ last days in Jerusalem quite closely, but there are some significant variations in his version.

Luke follows Mark with the string of incidents in which Jesus debates the authorities instructs his disciples (Luke 20:1–21:7). This Gospel has already recounted Jesus’ teaching about the greatest commandment in introducing the parable of the Good Samaritan (Luke 10:25-28), so it omits the scene found in Mark 12:28-34.

Luke also follows Mark with the scene in which Jesus instructs his disciples about the coming times (Luke 21:8-38). Jesus has given another version of his eschatological teachings in an earlier chapter (Luke 17:22-37), as this aspect of his teaching is of central significance. This “eschatological discourse” of Luke 21 represents the bedrock of apocalyptic teaching which Jesus gave his earliest followers, although Luke refines some aspects when compared with Mark 13.

The Lukan prediction of coming persecution is fairly similar to Mark’s report, but Mark’s description of “the desolating sacrilege” (Mark 13:14-20) transforms into a specific narration of the fate that lies in store for Jerusalem (Luke 21:20-24). Luke was writing after these events had taken place (in the year 70 CE), so he places words on the lips of Jesus which clearly reflect these events.

Luke omits some of the later material in this section (some of it has already appeared in chapter 17), and adds a brief conclusion to this block of teaching, emphasising the need to “be alert at all times” (Luke 21:34-36), as well as a narrative conclusion (Luke 21:37-38), drawn from the earlier Markan account.

Luke omits the story of the woman who anointed Jesus while they were at table together (Mark 14:3-9), as he has already recounted this incident much earlier (Luke 7:36-50). Jesus shares a last supper with his disciples, which is set as a Passover meal (Luke 22:7), as it is also in Mark 14:12 and Matthew 26:17, but not in John, since the Passover lamb is not slaughtered in that Gospel until Jesus is actually hanging on the cross (see John 19:14, 41).

At this meal, Jesus speaks about two cups—one before the meal (22:17) and one after the bread had been broken (22:20). An actual Passover meal would most likely have had four cups (as is evident in later Jewish tradition), not just one or two cups. Luke’s account of the words spoken by Jesus differ in subtle ways from the version found in Mark and Matthew. Luke’s word over the bread includes the instruction to “do this in remembrance of me” (22:19), which appears also in the 1 Cor 11 version.

Luke frames the meal as an expression of eschatological hope, beginning with his statement, “I have eagerly desired to eat this Passover with you before I suffer; for I tell you, I will not eat it until it is fulfilled in the kingdom of God” (22:16), and ending with “I confer on you, just as my Father has conferred on me, a kingdom, so that you may eat and drink at my table in my kingdom, and you will sit on thrones judging the twelve tribes of Israel” (22:29-30).

Also at this meal, Jesus gives the disciples some final teachings, which are expanded in Luke’s account. Of particular note is the inclusion of the dispute about greatness (22:24-30), which Luke has moved out of the time of his public activity as he travelled in Galilee (Mark 10:35-45). This has the effect of highlighting the mixed nature of the disciples who recline at table with Jesus: not only the one who betrayed him (22:21) alongside the one who will deny him (22:31-34), but also those who still do not grasp the nature of Jesus’s message (22:24-26).

There is also the enigmatic and tantalising word about travelling with a purse, and a bag—and a sword (22:35-36). Only Luke reports this saying, which ends with Jesus’ apparent acceptance of the fact that his disciples carry swords: “Look, her are two swords.” “It is enough.” (22:38)

Then follows Jesus’ prayer, betrayal and arrest on the Mount of Olives. Luke shapes the scene on the garden so that it replicates the testing of Jesus at the start of his ministry (4:1-13), framing his account with the key phrase “pray that you may not come into the time of trial” (22:40, 46). The Lukan narrative continues, reporting how Jesus is denied by Peter (22:54-62), then taunted and interrogated by Jewish authorities (22:63-71).

In Luke’s Gospel, Jesus is brought to trial before Pilate, the Roman governor of Judea (23:2-5) as well as Herod, the Jewish client king of Judea (23:6-16), and then back to Pilate to be sentenced (23:17-25). Luke’s Pilate especially emphasises that Jesus is innocent, stating this three times (23:4, 14, 22). This feeds into Luke’s overall apologetic enterprise, developing a rationale for the place of this faith movement within the Roman Empire.

Then follows the account of Jesus’ crucifixion and death (23:26–49), which largely follows Mark’s account. Significant Lukan additions include the women wailing for Jesus as he walks to his death (23:27-31) and a longer interaction between Jesus and the criminals crucified alongside him, including the memorable phrase, “today you will be with me in Paradise” (23:43).

At the moment of his death, however, Jesus does not cry in despair (“why have you forsaken me?”, as in Mark 15:34) but shows firm confidence in God (“into your hands I commend my spirit”, Luke 23:46).

Luke has a scene at the empty tomb quite similar to that in Mark 16. He includes the interaction between the women, who have encountered the empty tomb and have come to believe that Jesus is risen, and the male followers of Jesus, who refuse to believe the “idle tale” of the women (Luke 24:10-11). This is consistent with the Lukan efforts to show that women were integral to the core group of those who followed Jesus (Luke 8:1-3).

This focus on Jerusalem serves two purposes. It fulfils the prophetic traditions about the eschatological role of Jerusalem (that is, the role it will play at the end of time). By locating the origins of the Jesus movement in Jerusalem, Luke establishes that the movement of Jesus’ disciples remains in continuity with Judaism. This will be an important motif in the second volume that Luke writes, the Acts of the Apostles.

Luke alone reports the ascension of Jesus into heaven (24:50–53); this pivotal event is repeated at the start of the second volume (Acts 1:6–11). Also crucial is Luke’s version of the commission which the risen Jesus gives as a parting word to his disciples: repentance and forgiveness of sins is to be proclaimed in his name to all nations, “beginning from Jerusalem” (24:47).

Another version of this commission introduces the second volume (Acts 1:8): “You will be my witnesses in Jerusalem, in all Judea and Samaria, and to the ends of the earth.” This verse sets out the programme for the rest of this volume. Immediately after this, Jesus ascends into heaven (Acts 1:9-11). This is the pivot from the earthly period of Jesus into the time when the movement of those who followed Jesus in that time will begin to form the customs and practices that led to the creation of the church.

Luke thus presents the death, resurrection and ascension of Jesus as both the climax to his earthly life and the foundation for the time of the church.

The featured image is the Altarpiece of the Passion, Death, Resurrection and Ascension of Christ in the Church of Sant Joan de les Abadesses (created 1341 – 1342), which has been exhibited in the Museu Episcopal de Vic in Barcelona since 1889; see https://www.museuepiscopalvic.com/en/colleccions/gothic/altarpiece-of-the-passion-death-resurrection-and-ascension-of-christ-mev-576