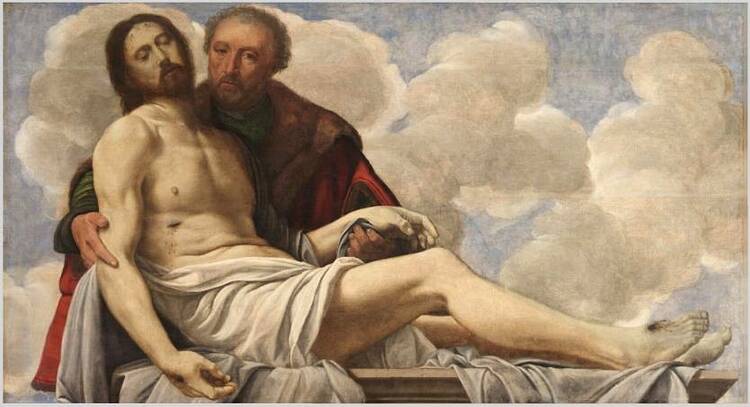 There are many scenes, and much close description, of the events that took place in Jerusalem in the days leading up to the death of Jesus, in the year 33CE) by most scholarly reckoning). We have already seen some differences in the way that the very last moments of Jesus, on the cross, are reported. But what happened after Jesus died?

What takes place immediately after Jesus utters his last words, and dies, is reported with reasonable consistency across all four canonical Gospels. All four canonical Gospels report that a request for the body of Jesus is made of Pilate by Joseph of Arimathea; Pilate permits Joseph to take the body, the body is handed over, and it is reverently placed in a tomb. See https://johntsquires.com/2022/03/18/joseph-of-arimathea-rich-and-righteous-devout-and-a-disciple-of-jesus/

By contrast, the Gospel of Peter (a second century document, written to counter some emerging “heresies”) claims that “the Lord screamed out, saying: ‘My power, O power, you have forsaken me.’ And having said this, he was taken up.” (Gosp. Peter 19). This was presumably his soul departing into heaven, for the body of Jesus was given to Joseph and placed in a tomb (Gosp. Peter 23–24). For the text of this Gospel, see http://www.earlychristianwritings.com/text/gospelpeter-brown.html

The earliest account of the actions of Joseph is found in Mark’s account. “Then Joseph bought a linen cloth, and taking down the body, wrapped it in the linen cloth, and laid it in a tomb that had been hewn out of the rock; he then rolled a stone against the door of the tomb” (Mark 15:46).

The action of Joseph would accord with the instruction in the Hebrew Torah: “When someone is convicted of a crime punishable by death and is executed, and you hang him on a tree, his corpse must not remain all night upon the tree; you shall bury him that same day, for anyone hung on a tree is under God’s curse. You must not defile the land that the LORD your God is giving you for possession.” (Deut 21:22-23). Joseph, by requesting the body, demonstrates his fidelity to Torah.

I am indebted to James McGrath for drawing this text to my attention; he has canvassed many of these issues in his book on “The Burial of Jesus: History and Faith”, 2008; see https://www.amazon.com/Burial-Jesus-History-Faith/dp/1439210179. Dr McGrath notes that Mark’s account tells us that “Jesus’ disciples were not in a position to accord Jesus an honourable burial … a pious Jewish leader named Joseph of Arimathea made sure that Jewish law was observed”. He cites a note in Josephus’ Jewish War that indicates this was a practice known elsewhere. As Josephus puts it, “the Jews are so careful about burial rites that even malefactors who have been sentenced to crucifixion are taken down and buried before sunset” (Jewish War, 4.317).

Whether the governor, Pilate, would have been amenable to this specific request, is dubious—given that the bodies of criminals who died by crucifixion were regularly cast into a communal pit outside the city, or there bodies were left out in the open for vultures to pick over. There was no honouring of the lives of criminals for the Romans. However, as the Torah prescribes an early burial of a dead body, it may well be that Joseph, a righteous man, and Nicodemus, a member of the Sanhedrin, would have been pressing Pilate to ensure that they were able to adhere to that commandment (Deut 21:22–23, cited above).

The first thing that we know about the tomb, in Mark’s earliest account, is that it was a tomb hewn out of rock (Mark 15:46). When Matthew takes this account and retells it, he adds two striking details: first, the tomb belonged to Joseph; and second, it had not yet been used. Matthew reports that “Joseph took the body and wrapped it in a clean linen cloth and laid it in his own new tomb, which he had hewn in the rock; he then rolled a great stone to the door of the tomb and went away” (Matt 27:59–60).

That Joseph owned the tomb may well have been inferred in Mark’s account, but Matthew makes it explicit. That it was a previously unused tomb is new information. Again, James McGrath argues that this added detail was an apologetic argument added because of difficulties with the story; the addition is “an attempt by later followers of Jesus to honour Jesus in their depiction of the burial, in a way his disciples had been unable to in historical reality”. The tomb, he maintains, in contradiction to the explicit claim in the text, was actually not owned by Joseph.

Luke includes this detail in his account: when Pilate permits Joseph to claim the body of Jesus, “he took it down wrapped it in a linen cloth, and laid it in a rock-hewn tomb where no one had ever been laid” (Luke 23:53). Luke, like Mark, makes no direct statement as to whether Joseph owned the tomb. It is the pristine, unused character of the tomb that he highlights. Could this be a reference to the significance of Jesus? He is accorded an honour, as God’s holy one, of being interred in a pure, unused tomb. Matthew makes sure we know that he was wrapped in a clean linen cloth and placed in a new tomb; both details undergird this apologetic claim about Jesus.

Luke does not indicate that Joseph was doing this because he was a disciple of Jesus; he is simply “a good and righteous man” (Luke 23:50), perhaps in the same way that Elizabeth and Mary “were righteous before God, living blamelessly according to all the commandments and regulations of the Lord” (Luke 1 6)—that is, a faithful and devout Jew.

In Mark’s account, however, the fact that he was “waiting expectantly for the kingdom of God” (Mark 15:43) May indicate that he was a follower of Jesus, or at least interesting in the message that Jesus proclaimed. (See https://johntsquires.com/2022/03/18/joseph-of-arimathea-rich-and-righteous-devout-and-a-disciple-of-jesus/)

Of course, in the Apostles Creed (shaped not by the original apostles but in a later time), there is a statement that Jesus “was crucified, died, and was buried; he descended to the dead”.

This affirmation was presumably included on the basis of the claim in the first letter attributed to Peter, that Jesus, as a spirit, “went and made a proclamation to the spirits in prison” (1 Pet 3:19), the later statement that “the gospel was proclaimed even to the dead” (1 Pet 4:6), and the reference in Ephesians, a later circular letter attributed to Paul, that Jesus “descended into the lower parts of the earth” (Eph 4:6).

There is, however, no reference to this journey to the underworld (the so-called Harrowing of Hell) in any of the Gospel narratives. The symbolism that these anonymous apostles develop is not evident in any way in the Gospels. The implication is, rather, that the spirit of Jesus goes to be with God in a heavenly realm, even as his body is dealt with in the earthly sphere.