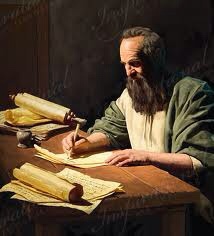 As the epistle is the lectionary for this Sunday and the following two Sundays comes from Paul’s letter to the Galatians, here is an Introduction to Galatians.

Paul’s letter to the Galatians begins in a dramatic, striking fashion. Almost all of Paul’s letters begin with a prayer of thanksgiving, designed to strengthen the relationship between Paul and those to whom he writes.

Not so in Galatians: in place of a friendly thanksgiving, Paul launches straight into a devastating criticism of the Galatians (1:6–9). In quick succession, he criticizes their activities, attacks the beliefs they have adopted from their teachers, and invokes a curse on their heads. What do we make of this language used by Paul?

Strong language is not uncommon in Paul’s letters. It was also widespread amongst the educated class of the day, who had been taught how to mount a strong and effective criticism by the careful use of rhetorical techniques. Rhetoric was taught to privileged young (male) members of Graeco-Roman society—which would have included Paul.

So Paul uses familiar rhetorical techniques to address the situation in Galatia. Other teachers had visited the Galatian community, and had taught the Christians there things that were at odds with what Paul was teaching. Paul uses rhetoric to persuade the Galatians to dissociate themselves from the teachings that apparently had been so effective amongst them.

If we knew precisely who the Galatians were, what group of teachers had been active amongst them, or what specific matters caused Paul to write this letter, we might be better placed to adjudicate on this matter. Unfortunately, we don’t have this kind of information.

The letter is sent to communities of faith in a whole region (Galatians 1:2), not a single city or town. Acts indicates that Paul visited there with Barnabas: he visited Pisidian Antioch (Acts 13:14–14:23) and later with Timothy (18.23). But we learn no further specifics of the Galatian churches from Acts. (There is a similar vagueness about the date of the letter: “late 40s or early 50s” is most often cited.)

The key themes of this letter relate to the Law, freedom, and unity.

The threat against this unity has arisen through the insistence of other teachers that true faith requires, first, circumcision (2:12; see Acts 15:1, 5). Paul asserts that these other teachers want their followers to be circumcised—although surprisingly, he notes, they themselves “do not obey the law” (6:13).

Paul claims that the “circumcision faction” were preaching “another gospel” (1:6) in which they actually “pervert the gospel” (1:7). He calls them “false believers” (2:4) who have “bewitched” the Galatians (3:1). His vehemence at one point is such that he exclaims, “I wish those who unsettle you would castrate themselves!” (5:12).

Paul’s problem, of course, is that he himself is circumcised, as he mentions at Philippans 3:5 (a fact that he omits when he rehearses his past at Galatians 1:13–14). How can he advocate the opening of the faith to those who are not circumcised, when he himself bears this sign of the covenant?

He insists that the Galatians “become as I am” (4:12), and yet threatens that “if you let yourselves be circumcised, Christ will be of no benefit to you” (5:2). What applies to Gentile converts must be different from what is the case amongst Jewish converts.

Circumcision was the pre-eminent sign of the Law for Jewish believers. Paul wants to move the Galatians away from their understanding of the Law. He re-interprets the scriptural passage that lies behind this Jewish custom. Galatians 3:1–5:1 thus contains a tightly-argued, complex argument concerning the Law.

Paul uses the story of Abraham, the patriarch to whom the requirement of circumcision was first commanded, as a sign of the covenant (Genesis 17). He interprets this story without once mentioning circumcision (3:6–18). It is the faith of Abraham, in believing God’s promise, that secured him righteousness (3:6–7) and opens the promise to Gentiles (3:8–9). It is that promise which is now fulfilled in Christ (3:13–14, 16, 29). This is the pathway to freedom in faith.

This letter demonstrates that freedom is at the heart of the Gospel. Paul offers this freedom anew to the believers in Galatia. The Gospel frees them from the complex web of duties and responsibilities under the Law.

Galatians is important because of the central theme of freedom that it articulates. In what ways does your faith provide you with a sense of freedom?