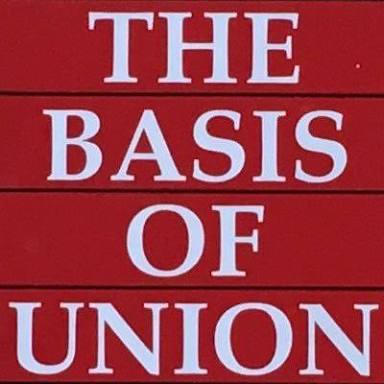 It’s been interesting to see the recent posts relating to the 45th anniversary of the inauguration of the Uniting Church on 22 June. I saw largely positive commentary, as well as a handful of more negative observations. All in all, it was time to consider and identify some key factors, both positive, and negative.

In the midst of all of this, I am thinking that it must be time for another post about organisation and governance in the Uniting Church in Australia. So this is a blog about the word THE.

Yes, that’s right: THE. Specifically, about the meaning and significance of that little word “the” in one sentence in a church document: the Basis of Union, the founding document for the church that I belong to, the Uniting Church in Australia (formed in 1977).

The particular sentence that I intend to focus on is found in paragraph 15(a) of the Basis. It reads: The Congregation is the embodiment in one place of the One Holy Catholic and Apostolic Church, worshipping, witnessing and serving as a fellowship of the Spirit in Christ.

Now, the word “the” actually appears four times in this sentence. However, it is the second of these four occurrences that is in my focus of attention: “the embodiment”.

The, in English grammar, functions as a definitive article; it sits before a noun and gives shape, specificity, definition to the noun that follows. So, “the cat” refers, not just to any old cat, but to that particular cat which I can see before me, sitting on the mat (yes, that particular mat, as opposed to any old mat).

The little word “the” thus has a specifying role, defining a particular thing for our consideration, in distinction from the great mass of other things just like it that we are not considering. “The” can thus place an emphasis on the singularity and particularity of the item that is so qualified.

But “the” can also be a generalising term, placed in front of a noun without any intention to give it concerted specificity. In this instance, the word “the” just has the generalised of kind of smoothing out the sentence. “Cat sat on mat” sounds clunky. “The cat sat on the mat” has a rounder and fuller feel to it, without ever intending to refer to THIS specific cat sitting on THAT particular mat. It’s actually a generic reference to what cats do when they find a mat. ANY cat. ANY mat.

So, when we turn to the section of the Basis of Union that deals with Governance, we first should note that the Congregation is not defined as a council. The Council (that is, the governing body) in a local context is named in the Basis as “the Elders or Leaders Meeting”. In practice, it was often called “the Parish Council”.

Some time after the Basis was written, the Assembly of the UCA determined that this body would be called the Church Council. It consists of “the minister and those who are called to share with the minister in oversight”. That oversight is the governance function of the Church Council, which is clearly identified and defined as being “the council within a congregation or group of congregations”.

There are three other councils which are so identified in paragraph 15 of the Basis: the Presbytery (“the district council”), the Synod (“the regional council”), and the Assembly (“the national council”). Together with the Church Council, these four bodies have responsibility for governance, the oversight of the various matters specified and allocated to each council in turn.

Now, the Congregation is not a Council. But it is an integral part of the Church. The Basis says that it is “the embodiment in one place of the One Holy Catholic and Apostolic Church”.

Does this means that the Congregation, as “the embodiment in one place of the One Holy Catholic and Apostolic Church”, is THE one and only way, THE pre-eminent way, THE most significant way, that the church is made manifest, or embodied, in human society? I have heard and read this claim many times, over the four decades that I have been active within the church. It is a commonly held (mis)belief.

Such a claim places an inordinate amount of emphasis on that little word “the”. It invests it with a priority sense, with an exclusive connotation—this is THE Church, the one and only way that it exists. This is a huge claim.

And it is often spoken in contexts where decisions of the Presbytery, or the Synod, or the Assembly, are in contention. The implication is clear: THEY are not really the Church. THIS, the Congregation, this is the Church!

And so, with the other entities mentioned in the Basis. These entities are clearly part of the church, as well. They may well also be understood to embody the church, as each one exercises its responsibilities and carries out its duties in the prescribed areas allocated to it. They give expression to the church as much as the Congregation does.

Indeed, other entities which have developed and evolved since the time that the Basis was written (in the mid-to-late 1960s) are clearly a part of the church as well. We cannot afford to invest that little word “the” with the sum totality of what we understand the church to be. The church is also aged care facilities, preschool centres, meals for the homeless programmes and theological training colleges, chaplains to the Defence Force and chaplains to those ill and in hospital, mental health chaplains and Frontier Service Padres—and much, much more.

So I recoil when I hear or read that the Congregation is THE Church, prioritised, privileged, and exclusively THE Church. It’s not. It is an important, local, expression of what we understand the Church to be.

A personal postscript: I have a clear and firm commitment to the life of the Congregation, having participated actively for over 40 years in the life of seven congregations in Australia (and three more whilst studying in the USA, and in a Methodist Circuit whilst living for a year in the UK). During that time I have been a member of four Church Councils, two times a Treasurer, and once a Church Council chairperson.

Much of the time I have done those roles whilst being engaged in fulltime theological education and presbytery oversight roles. My current position is fully focussed on resourcing, supporting, encouraging, and even challenging Congregations and Church Councils in their life, service, and witness.

I’ve been privileged to have been a member of a Congregation which had a strong Congregational heritage. In fact, it was the home Congregation of the sole Congregationalist lay member of the Joint Commission on Church Union, Maynard Davies. I understand that Mr Davies was the member who pressed for the inclusion of paragraph 11 in the Basis of Union.

That’s the paragraph that affirms that the Uniting Church will remain open to new insights which emerge from scientific thinkers, historical researchers, our encounter with other cultural customs, and our engagement with people from societies different from our own.

This, of course, is a really important element in the theology and practice of the UCA—from this strong Congregational heritage, a progressive and engaged church has developed. The policies and values that have been promulgated by Synods and Assemblies over the decades owe much to this commitment, and to the ongoing work that has been done within “the wider church” in such areas. All from a strong Congregational ethos!

So I think it is entirely possible to value the local expression of church whilst engaging in and supporting broader expressions. All of this is us, as we say.