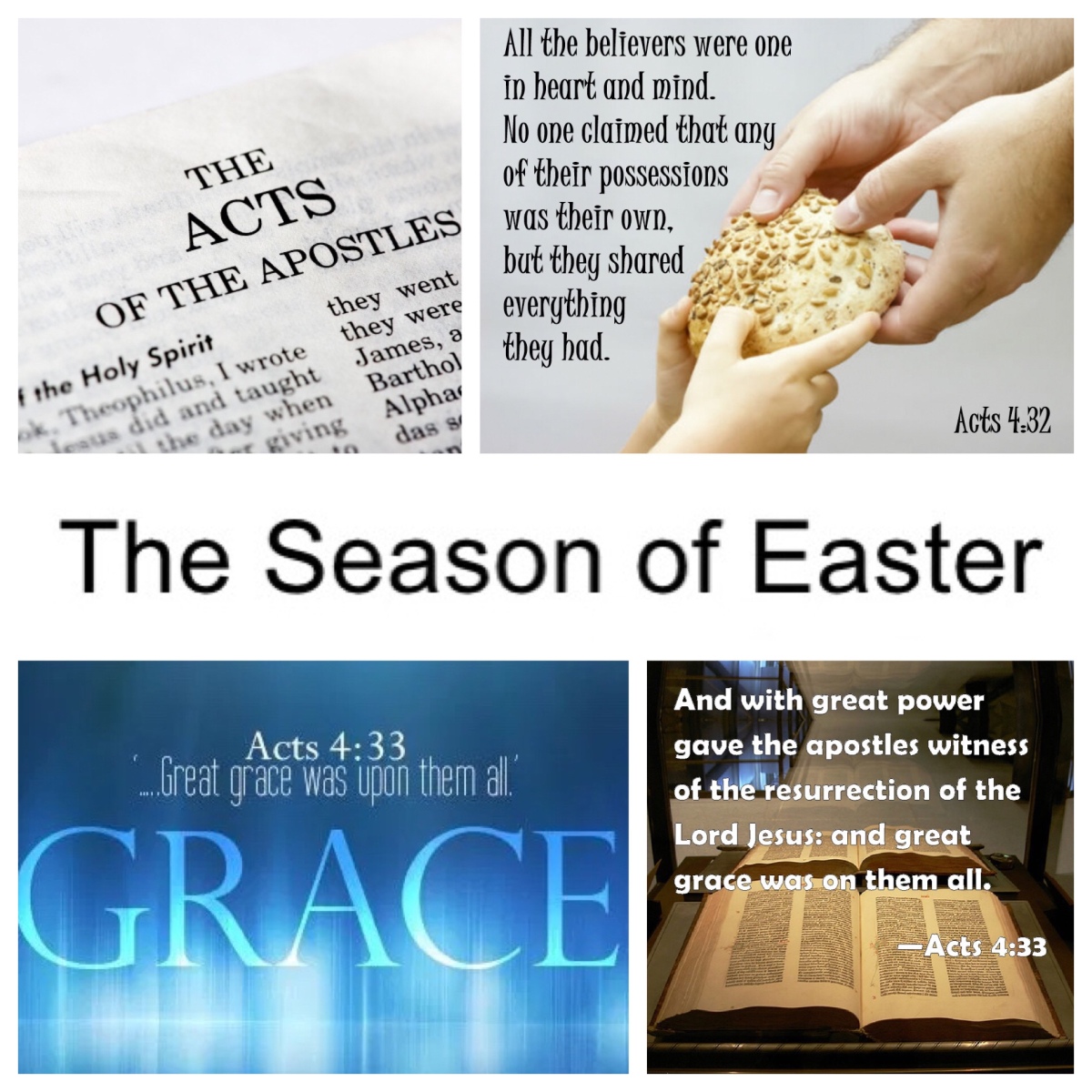 During the weeks that stretch out after Easter Sunday, we are in the season of the year (in the church calendar) that is called, simply, Easter. This coming Sunday will be the second Sunday in Easter (the second of seven, running through to the middle of May). During this season, the lectionary we use replaces the first reading from Hebrew Scripture with sections from the book of Acts—the second of two volumes attributed to Luke.

Acts recounts, from one perspective, the way that the church emerged as the key organisational response to the teachings and example of Jesus. Luke, the presumed author of the two volumes which provide an orderly account of the things fulfilled among us (Luke 1:1, 3), takes pains to indicate multiple lines of connection and continuity between his account of Jesus (the Gospel of Luke) and his subsequent account of the church (the book of Acts).

They were messianic communities, followers of ‘The Way’ (9:2; 18:25; 19:9,23; 22:4; 24:14,22) which grew, over time, into groups identified as Christians (11:26)—and from that developed the Christian church. From these descriptive narratives, the church has drawn guidance for ways to shape its life in subsequent eras.

How do we characterise the church? A classic way from the traditions of the church is to cite ‘The Marks of the Church’: one, holy, catholic, and apostolic. Those four descriptions have been derived from various biblical sources (including the narrative shaped in Acts), and have certainly influenced theology, church organisation, and preaching over the centuries.

The Acts passage provided by the lectionary for this coming Sunday, although quite short (4:32-35), nevertheless is very rich. It offers another set of Marks, which the author of Acts used to describe the church. All three have already been offered in an earlier section of the narrative, as the author recounts them formation of the faith community after the preaching by Peter on the Day of Pentecost. (See https://johntsquires.com/2020/04/28/teaching-fellowship-bread-and-prayers-the-marks-of-community-acts-2/)

Fellowship is identified as a key aspect of the community (2:42). The precise term koinonia occurs only here in Acts; however, the notion of sharing or togetherness which is inherent in it is evident in other ways. Members of the community gather with one mind (2:46) in a way that will consistently characterise the community (4:24; 5:12; 15:25).

These phrases used evoke the traditional Greek proverbs, ‘friends have one soul’ and ‘the goods of friends are common property’, which were known since the time of Aristotle (Aristotle, Nicomedian Ethics 9.8.2; Cicero, De officiis 1.16.51; Plutarch, On Brotherly Love 490E, How to Tell a Flatterer 65A and De amic. mult. 96E; Iamblichus, Life of Pythagoras 65A; Dio Chrysostom Oration 34.20; Diogenes Laertius Lives 5.20, 8.10).

The Essenes were described in a similar way by Philo, Every Good Man is Free 85, and Josephus, Jewish War 2 §122. The first phrase is also reminiscent of the common Deuteronomic reference to ‘heart and soul’ (Deut 6:5; 10:12; 11:13; 13:4; 26:16; 30:2,6,10). The early messianic communities shared in this central characteristic. For the author of this book, it was to be a defining mark of the messianic communities in each place they were found.

2. A second mark refers to the powerful testimony to the resurrection that the church offers (4:33; see 2:24,32; 3:15; 4:2). The proclamation the apostles, of course, is a regular element in the story of Acts: there is a comprehensive list of no less than thirty-six speeches in Act at

3. A third mark of these communities was the manifestation of grace (4:33b). The community in Jerusalem was earlier described in this way, as “having grace towards the whole of the people”—the NRSV translates this, less accurately, as “having the goodwill of all the people” (2:47). This introduces another term which will have significance in the narrative of Acts: charis. In 2:47, charis is linked with the inner life of the community as they “ate their food with glad and generous hearts, praising God and having grace towards the whole of the people”.

Grace is a characteristic which also marks Stephen, enabling him to perform “great wonders and signs” (6:8); in his speech, he notes that God ascribed grace to Moses (7:10) and to David (7:46). It is this grace of God which is evident in the growing community in Antioch (11:23) and continues to be a characteristic of the community in Iconium, where once again it is evident through the signs and wonders granted by God (14:3).

Such grace is regarded as the means of salvation (15:11) which enables people to believe that Jesus is Messiah (18:27-28). This same grace of God is attested by Paul throughout his ministry (20:24,32). It thus forms another of the characteristics of messianic communities in Jerusalem and beyond.