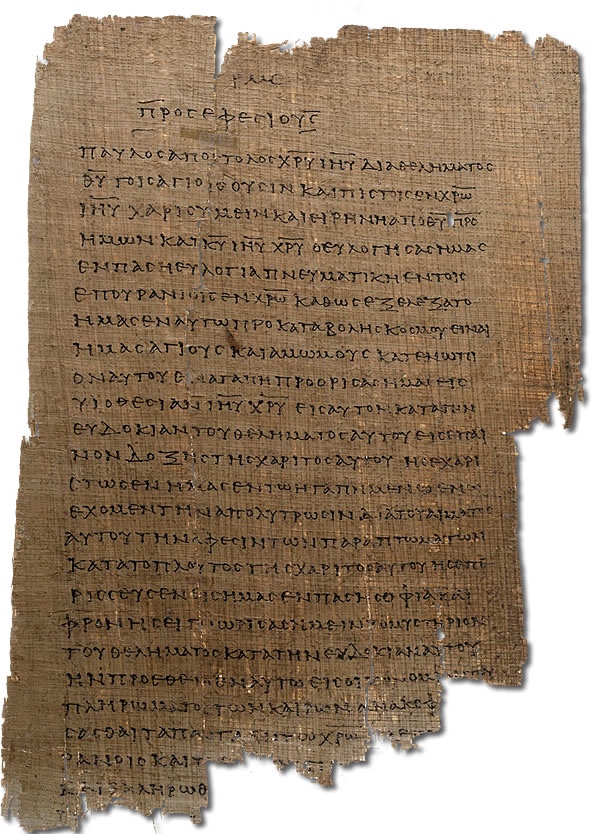 What do we know about the situation in Ephesians, to which this letter is addressed? This letter is not like many of the letters of Paul, where we can glean much information from those letters about the faith community in the city to which it is addressed (Corinth, in Achaea; Thessaloniki and Philippi, in Macedonia; the region of Galatia; and Rome, in Italia). We know little, if anything, about the situation in Ephesus from this letter.

The letter does not begin with a thanksgiving. In most letters by Paul, the thanksgiving identifies the key characteristics of the community to which the letter is sent, as well as the issues which will be canvassed later in the letter. Instead, here there is a lengthy blessing in which a grand theological statement is developed (1:3–14), before a brief thanksgiving is offered for the faith and love of the recipients (1:15–16).

This opening blessing (1:3–14) is the reading set for this Sunday. In the CEV, there are no less than 12 sentences in these 12 verses; in the GNB, there are 10 sentences. In the NIV, there are 8 sentences in this passage, whilst the NRSV offers it all in 6 sentences. (Decades earlier, the RSV had also used 6 sentences for the whole.) In the KJV, there are just 3 sentences, although a punctuating colon (:) appears on six occasions, with a further three semicolons (;).

But in the original Greek, this whole passage is just one long sentence — a main clause (“Blessed be the God and Father of our Lord Jesus Christ”, 1:3), followed by a long series subordinate clauses, setting out what this God has done: “who has blessed us in Christ … who predestined us in love for adoption … in him we have redemption … according to the riches of his grace, which he lavished upon us … making known to us the mystery of his will … according to his purpose, which he set forth in Christ … in him we have obtained an inheritance … In him you also, when you heard the word of truth, the gospel of your salvation, and believed in him, were sealed with the promised Holy Spirit”.

Incidentally, the ASV grasps the mantle, rendering all 12 verses in one long, complex sentence (with numerous colons and semicolons interspersed). It reads very heavily in English. At the other extreme, The Message (more of a paraphrase than a translation, in my mind) takes no less than 16 sentences to translate it (in expanded, colloquial form). And the NCB takes a poetic approach,,putting the whole section into unrhymed verse, using 6 sentences for the whole poem.

(You can check out these, and more, translations, at https://www.biblegateway.com)

So this blessing sets out a number of wonderful claims about Jesus—as God works through him, we have redemption, the forgiveness of trespasses; we are adopted as his children, grace is lavished upon us, revealing the mystery of his purpose; and he offers the promise of an inheritance. The blessing ends with a final exultation, “to the praise of his glory” (1:14b).

There is nothing in these opening verses—this one, long sentence—to give any indication of the specifics of the particular situation in Ephesus. And, it must be said, the existence in this letter of this mammoth long sentence—along with other complex multi-clause sentences in later section (1-9, 11-15, 19-22; 3:1-13, 14-21; 4:1-6, 7-16) is a very strong suggestion that the document was not actually written by the apostle Paul.

Like this general opening blessing, the elements which follow also have broad, generic qualities, as the general prayer which is offered (1:15–16) veers off almost immediately into further theological exposition (1:17–23).

The end of the letter also offers no clues as to what is happening in Ephesus. The final section actually replicates, almost completely word-for-word, some of the greetings at the end of Colossians, in an abbreviated form, suggesting a later writer imitating the style of an earlier letter—but in a rather clumsy way, simply copying word-for-word.

Colossians concludes, “Tychicus will tell you all the news about me; he is a beloved brother, a faithful minister, and a fellow servant in the Lord. I have sent him to you for this very purpose, so that you may know how we are and that he may encourage your hearts; he is coming with Onesimus, the faithful and beloved brother, who is one of you.” (Col 4:7–9).

Compare this with the final greetings in Ephesians: “Tychicus will tell you everything. He is a dear brother and a faithful minister in the Lord. I am sending him to you for this very purpose, to let you know how we are, and to encourage your hearts.” (Eph 6:21–22). It is so similar, with the same structure, and many phrases in common. (If I were looking for plagiarism—which I once did as part of a job that I had—I would rate this as a direct copy.)

Did the author of this sermon-letter actually know Tychicus? Or did he simply copy something that was at hand, to lend an air of “authenticity” to the document?

In the body of the letter, we find indications a few sparse details. We learn that Paul is a prisoner (3:1; 4:1) and that the recipients are Gentiles (2:11; 3:2). But that’s it. Not much at all to go on. After that, the final prayer and grace (6:23–24) is likewise entirely generic. These are very slim clues to work from, if we want to reconstruct a picture of the community to which the letter was sent.

Another clue emerges from the first verse of the letter, for it contains a striking textual variant. Although we commonly read the letter as sent “to the saints who are in Ephesus and are faithful in Christ Jesus” (1:1), a number of early manuscripts of this letter omit “in Ephesus”. This is a most important phrase, as it identifies the people purportedly addressed in the letter.

Whilst we traditionally read the letter as being addressed to “the saints who are in Ephesus, and are faithful in Christ Jesus”, it is far more likely that the original document was addressed to “the saints who are faithful in Christ Jesus”—a generic, all-encompassing orientation, rather than a letter to specific group of people in a particular place.

Indeed, one early Christian writer knew this document as a letter “to the the Laodiceans”—not to the Ephesians!

An important fact that sits alongside this claim, and validates the idea that this was not a context-specific letter, but a widely-offered sermon, is the observation that the letter contains no other indications that it is specifically related to the city of Ephesus and the community of faith established there.

We can find references to people being “blown about by every wind of doctrine, by people’s trickery, by their craftiness in deceitful scheming” (3:14) and to those who “deceive you with empty words” (5:6), but these are no more than generalised description of opponents.

The main content of the letter reflects the general situation developing in the early churches, as Gentiles have found their place alongside Jews within the communities. It gives no clues of a specific context which is grounded in a particular community of faith.

The body of the letter reads more like a sermon, offering general theological teaching and ethical instruction. It’s highly likely the letter wasn’t sent by Paul to believers in Ephesus, but originated later in the first century, after the lifetime of Paul, as a sermon setting out the fundamentals of the teaching that began with Paul, and was handed on by those who followed him in proclaiming the good news to gatherings of believers.

The theological teaching in the letter—sermon provides doctrinal instruction about the divine plan, beginning in the opening blessing and prayer (1:3–23), followed by sections explaining the role of Jesus Christ (2:1–10); the inclusive nature of the church, in which Jews and Gentiles are brought into one body (2:11–3:6); an excursus on Paul’s role (3:7–21); and further reflections on the church (4:1–16).

Like Colossians and the three Pastoral Epistles, Ephesians testifies to a more enculturated church, from a period later than the time in which Paul was active—a time and place in which the way of Jesus has begun to merge with the dominant ethos of the society. The sharp edges of The Way have been softened; the clear focus of the teachings of Paul, the energetic preacher of good news, has become blurred and fuzzy under the weight of pressures from the dominant Greco-Roman culture.

Although the rhetoric of this letter purports to present a distinctive Christian ethic, in fact it is becoming much more strongly influenced by hellenistic ethics. It demonstrates the way that the radical movement initiated by Jesus gradually becomes domesticated, institutionalised, and less distinguishable from the dominant culture.

This blog draws on material in PAUL: an exploration of the writings of the apostle, by Elizabeth Raine and John Squires (self-published 2014)