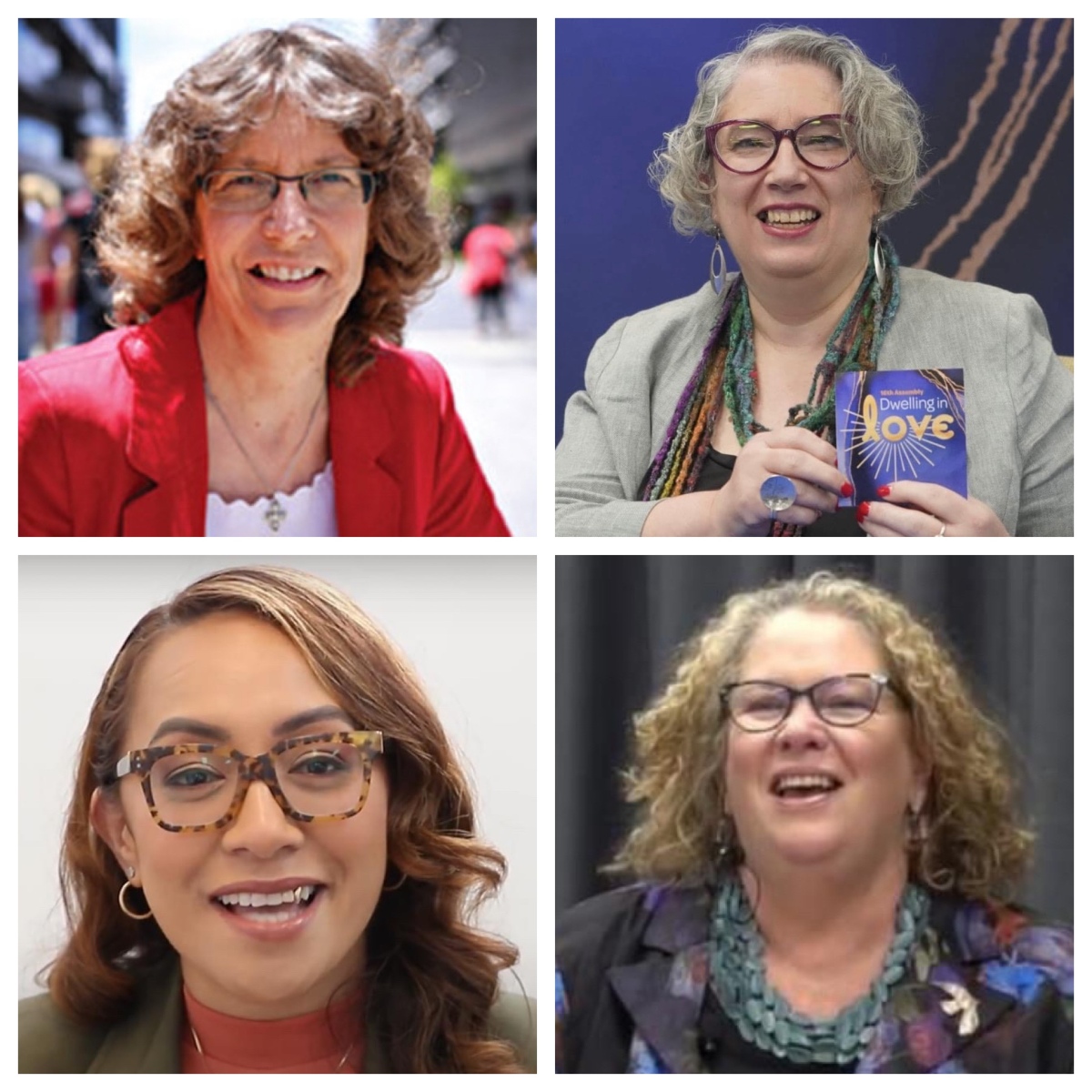 The National Assembly of the Uniting Church in Australia has just installed the Rev. Sharon Hollis as President of the Assembly for the next three years (2021–24).

At the same meeting (being held online because of the COVID pandemic), members of the Assembly have elected a female President-Elect, the Rev. Charissa Suli. She will serve as President-Elect for three years, and then take up the position of President in July 2024.

The UCA employs a system where the current President, the immediate former President, and the President-Elect all serve as ex officio members of the Assembly Standing Committee, the body that oversees the church during the three years in between National Assembly meetings.

For the next three years, the President, the Past President, and the President-Elect will all be females: the Rev. Sharon Hollis, Dr Deidre Palmer, and the Rev. Charissa Suli, respectively. In addition, the current General Secretary of the Assembly is also female: Colleen Geyer. Her term has just been extended by the current Assembly. It is a striking symbol, when considering the national leadership of Christian churches across Australia. All of our key leadership are female.

The symbolism is potent, when Heads of Churches gather: women in such ranks have, to this point, been somewhat rare. The Uniting Church contribution has been, and will continue to be, a reminder, of the importance of providing a female perspective when issues of national social and political importance are being considered. (It’s a message that our national political leadership seems incapable of hearing and implementing—despite the power of the #EnoughIsEnough movement from earlier this year.)

Women in leadership is not an unusual thing for the UCA. To be sure, women have served in leadership roles in a number of denominations. But amongst the historic mainstream denominations, the Uniting Church stands out from Roman Catholic and Anglican Churches, with many more women stepping forward in leadership.

The same comparisons can be drawn with Baptist, Church of Christ, and Pentecostal churches over the past half century. (And a number of women in leadership in Pentecostal or other conservative churches have been in married teams, where their role has been “covered” by the “headship” of their husband—partner).

This is completely consistent with the affirmation made in the Basis of Union—the document on which the formation of the Uniting Church was based. Paragraph 13 of the Basis, after recognising the existing ministries in the three participating denominations at the time of union, states, “The Uniting Church will thereafter provide for the exercise by men and women of the gifts God bestows upon them, and will order its life in response to God’s call to enter more fully into mission” (para. 13).

This was consistent with the practice of those three earlier denominations, which each had ordained women to serve in ministry: the Congregational Church had ordained Rev Winifred Kiek in 1927; Rev Dr Coralie Ling, a deaconess, became the first woman to be ordained in the Methodist Church in 1969; and Rev Marlene (Polly) Thalheimer was ordained as the first female minister in the Presbyterian Church in 1974. You can read about these women, and more, in a fine article by Rev Dr Avril Hannah-Jones, at https://revdocgeek.com/2013/06/22/women-in-the-uniting-church-by-a-partial-prejudiced-ignorant-historian-to-quote-the-immortal-jane/

Indeed, this practice is also consistent with the fundamental theological affirmation made earlier in paragraph 13 of the Basis, declaring that the church “acknowledges with thanksgiving that the one Spirit has endowed the members of Christ’s Church with a diversity of gifts, and that there is no gift without its corresponding service: all ministries have a part in the ministry of Christ.” This, of course, derives from the crystal clear affirmations about the gifting of the Spirit that Paul makes in 1 Corinthians 12. The Spirit knows no limits of gender in gracing individuals with gifts for ministry.

And Paul (despite the inaccurate ways in which his letters are portrayed) was completely accepting and affirming of women in ministry leadership as partners with him in the work they were undertaking. See my considerations of this matter at https://johntsquires.com/2020/11/19/women-in-the-new-testament-1-the-positive-practices-of-jesus-and-the-early-church/ and https://johntsquires.com/2020/11/19/women-in-the-new-testament-2-six-problem-passages/

So, women in key leadership roles is a practice consistent with scripture and in accord with the central values and practices of the Uniting Church. Along with the women already noted in the opening paragraphs above, a number of the Synods have had female Moderators, Queensland being the last to elect a female in Kaye Ronalds, who was the first female in that role in that Synod, serving 2011–14 (pictured below).

Currently, there are three female Moderators: Thresi Mauboy Wohangara in the Northern Synod, Denise Liersch in VicTas, and Susy Thomas, in WA.

Whilst the Assembly has elected two lay women to the top leadership role—Dr Jill Tabart (1994–97) and Dr Deidre Palmer (2018–21)—lay female Moderators have been more scarce. In two Synods, lay women were elected as Moderator early in the life of the Uniting Church—in Victoria, Mrs E.A. Mitchell was the second Moderator (1979), whilst in NSW, Lilian Wells was the first Moderator (1977).

NSW subsequently elected Freda Whitlam (1985–86) and Margaret Reeson (2000–02) as Moderators. Tasmania elected Isabel Thomas Dobson (1997–99) and then the VicTas Synod elected her as Moderator for a second term (2009–13). The last Moderator for the Synod of Tasmania, before it joined with Victoria, was Colleen Grieve (2001–02).

The Rev. Charissa Suli, a second-generation Australian of Tongan heritage, is the first person of non-Anglo origins to serve in the National leadership role, although some Synods have elected non-Anglos as Moderators: Tongan Jason Kioa in VicTas (2006–09); Chinese Dr Tony Chi (1992–93) and Korean Myung Hwa Park (2014–17) in NSW.ACT. In the Northern Synod, indigenous leader Djiniyini Gondarra served as Moderator (1985–87) and now Thresi Mauboy Wohangara is Moderator. All of these leaders have been ordained people.

And the age of Charissa Suli is striking: she is a “young person” by church reckoning, having been ordained for just seven years, and still being in her thirties. That must surely be something not often seen in church leadership.

Of course, all of this recounting of females in prominent leadership roles hasn’t yet taken into account the numerous females who have served as Chairperson of Presbyteries, Church Councils, and Congregations—to say nothing of the thousands upon thousands of females serving as active members of Congregations and Fellowship Groups and living out their discipleship in community groups right around the country. Females outnumber males within the church by a factor of at least 2:1, so it is way beyond time that our leadership reflects this!

As we look back on 44 years of the Uniting Church, it is clear that we have sought to reflect the affirmations made in the Basis of Union, in undertaking the discernment about who would provide the leadership required in the various councils of the church. It might have looked better if the ratio of male/female, and ordained/lay, and even Anglo/CALD had been more evenly balanced. (The names of other leaders not noted in my survey above were all, like me, ordained males, usually “of mature age”.)

Nevertheless, the array of leadership we can point to provides a sign of our commitment as a church, to be open to the moving of the Spirit. We have seen that in the gifted leadership of Dr Tabart (who signed the Covenant relationship with the United Aboriginal and Islander Christian Congress in 1985) and Dr Palmer (who has steered the church through the difficulties of the 2018 decision about marriage, and who has been key to the development of a fine resource on domestic violence in 2021).

Confession: I haven’t done an exhaustive search into the names of all the Moderators. Those noted in the blog are those whose names I found in online resources (largely Wikipedia). Not every Synod has provided a full list of Moderators online. If there are other females, or lay people, who should be included amongst those I have noted, please let me know, and I will add them in!

Footnote: a month later, the NSW.ACT Synod elected the Rev. Mata Havea Hiliau as Moderator-Elect, to take office for three years commencing in early 2023. Gender, generational change, and CALD leadership all in one go.