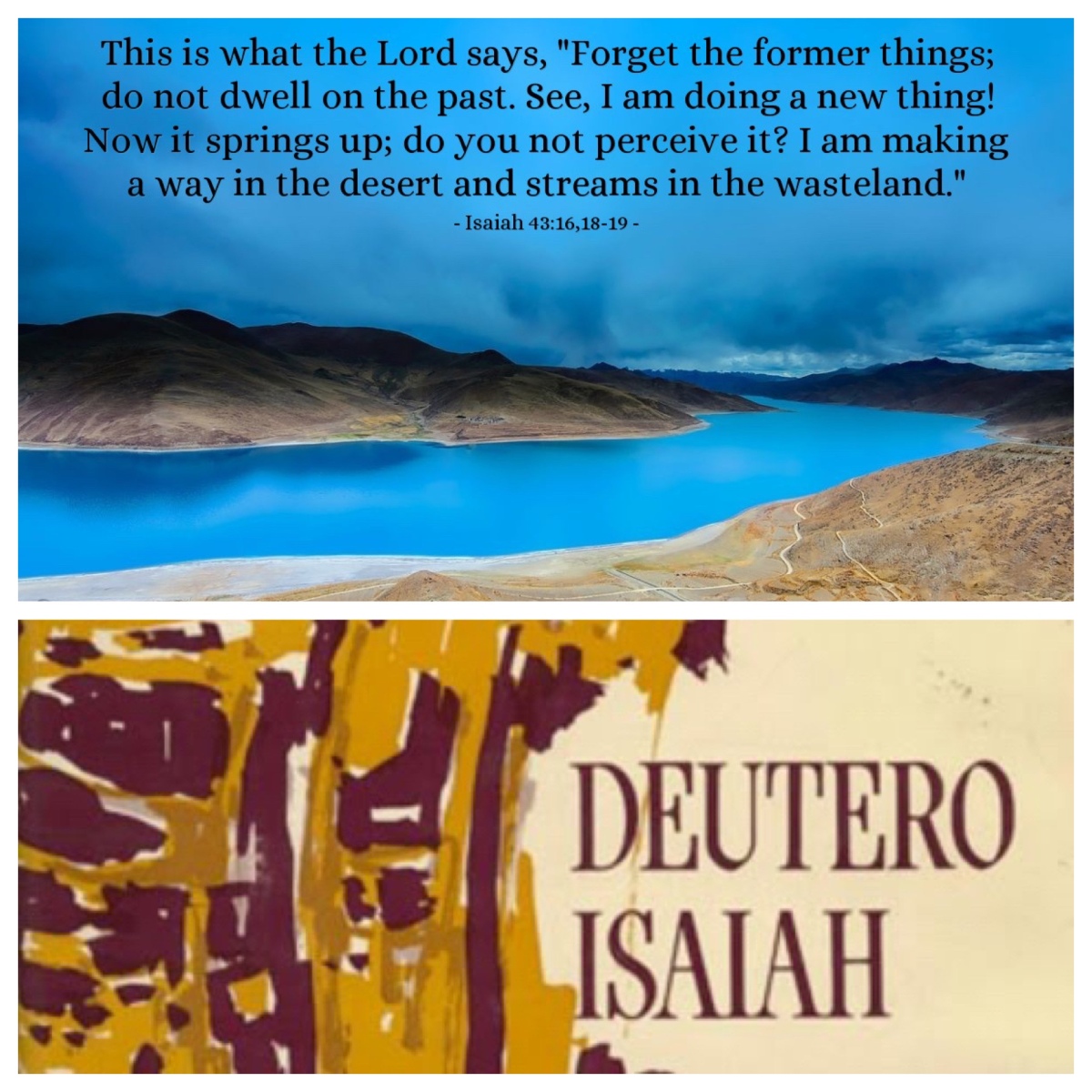 These words are attributed to the prophet Isaiah, who lived in the southern kingdom of Judea eight centuries before Jesus, serving as a “court prophet” during times of abundance. Isaiah was active a time when the southern kingdom of Judah was flourishing. He became active in the last years of the reign of Uzziah, who, it was said, ruled as king for fifty-two years (788–736). He lived through the reigns of Jotham and Ahaz (16 years each), and died towards the end of the reign of Hezekiah, who himself enjoyed 29 years on the throne.

The year of Isaiah’s death is uncertain; he may well have been alive, still, when the Assyrian army of Sennacherib laid waste to the northern kingdom (722–721) and deported the northerners to clear the land. In such a context of stability, however, the promise that God would do “a new thing” sits somewhat uneasily in the situation we can reconstruct.

This is one reason why many scholars maintain that the section of the book of Isaiah where we find this passage (Isaiah 40–55) is set some centuries later, after the southern kingdom itself had been conquered by the Babylonians (587–586), and the people taken into exile in Babylon. This became the pivotal event in the history of Israel, the people as a whole—at least in terms of the stories that we have gathered in the scrolls of the Hebrew Scriptures.

There are many stories in Isa 1—39 relating to the personal life of the prophet, but no such personal connections in Isa 40—55. By contrast, a very direct historical reference, in a section referring to Cyrus, King of Persia (44:24–45:19), indicates a later setting. Cyrus ruled the Achaemenid Empire from 559 to 530 BCE and, after defeating the Babylonians in 539, issued a decree permitting the exiled Israelites to return to their homeland.

We have already reflected on one passage from this section of Isaiah (55:1–12, Lent 3), noting how it differs from the worldview and understanding of God from earlier periods in the life of Israel.

This passage thus comes from a time when the Israelites were in exile in Babylon. It was not a happy time for many of the people of Israel. (Psalm 137 is the classic expression of this; note especially the anger expressed in verses 8–9.) The people of Israel yearned to return home (Jer 29:10–14; 30:1–31:26). They looked back on the past with longing eyes. They remembered their years in the land which God had given to them. Now, they were living among Babylonians—foreigners, conquerors.

Soon, they would leave behind these memories, and grasp hold of the future that God has for them. God would “send to Babylon and break down all the bars” (43:14). God, the prophet declares, is doing a new thing! (43:19).

And yet, that “new thing” is informed by the past. The people once travelled out of slavery in Egypt, into freedom in Canaan, leaving behind the Egyptian “chariot and horse, army and warrior”, stuck in the waters of the sea that suddenly swamped them—“extinguished, quenched like a wick” (43:17; cf. Exod 14:26–31, 15:4–12, 19, 21). In the time of the prophet, “the shouting of the Chaldeans will be turned to lamentation” as the people depart (43:14).

As they were sustained in that desert journey long ago, so God now will give “rivers in the desert” (43:19) which will provide “water in the wilderness … to give drink to my chosen people” (43:20) as they travel on that way. That caled for shouts of praise to God! (43:21).

The Exodus imagery was potent for Israel; not only was the story developed over centuries to provide a story of origins for Israel, but it was also co-opted into the prophecies predicting the return to the land, providing those oracles with greater strength and rigour. (And, of course, the story continued on into the feast of Passover, the annual celebrations which continue amongst Jews right through until the present day.)

The Exodus imagery also undergirds the Christian story. Jesus, declared by John the Baptist to be the lamb of God (John 1:29, 36), affirmed by Paul as the new Passover lamb (1 Cor 5:7), envisaged by the ageing prophet on Patmos to be the slaughtered lamb (Rev 5:6–14), is believed to enact a new Passover for his followers, according to the developing Christian tradition.

Just as the shedding of the blood smeared on the doorposts of the Israelites was their salvation (Exod 12:7, 13, 22–23), so the shedding of Christ’s blood is understood to effect salvation (Rom 5:8–10; 1 Pet 1:18–21). So the age-old imagery and symbolism is reworked by the early Christian writers, continuing the process seen in the words of the prophet speaking during the return from Exile (Isa 43:16–21).