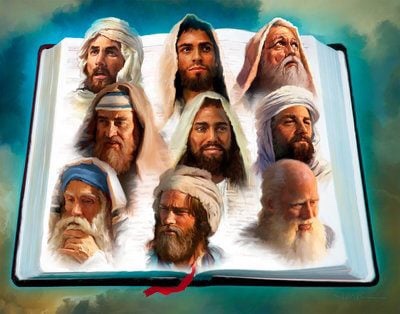 The lectionary is currently taking us on a journey through various prophets found in the Old Testament. It is currently offering passages from the prophet Hosea, for last Sunday, and next Sunday. Concurrent with this, Elizabeth and I are leading a series on The Prophets, in which we cover most of the prophetic books in the OT—at least, more than are covered in the lectionary sequence.

As I’ve posted already about Amos and Hosea, and also about Micah (see the links below), this blog relates to four “minor prophets” who, like Amos, Hosea, and Micah, are labelled as “pre-exilic prophets”.

That term indicates that these four prophets—Zephaniah, Nahum, Habakkuk, and Obadiah—were each active in the few decades leading up to the conquering of the southern kingdom by Babylon in 587 BCE, and the removal into exile of the people as a result of that event. Obadiah is most likely to have been active just after the exiles started to leave (verses 11–14 could well refer to the fate of Jerusalem).

Each book is short; the first three have three chapters each—63 verses in Zephaniah, 56 verses in Habakkuk, and 47 verses in Nahum—whilst Obadiah has only one chapter of 21 verses. Nahum, Habakkuk, and Zephaniah (in that order) are grouped together in the canon; Obadiah appears before them, coming after Amos and before Jonah and Micah. The arrangement of books amongst The Twelve (the minor prophets) is not by chronology, nor by theme; the precise reason has occasioned a still-unresolved scholarly debate.

Each book contains the prophetic rhetoric that we have met in the earlier northern kingdom prophets: calls for justice, criticism of oppressive actions, and threats of intense punishment from a wrathful God. Most of them also contain glimpses of hope.

Habakkuk says “I will stand at my watch post, and station myself at the rampart” (Hab 2:1), from where he declaims the words of judgement given to him by God: the wealthy will be called to account by their creditors, violent terrors will arise, and “the cup in the Lord’s right hand will come around to you, and shame will come upon your glory” (Hab 2:15).

Amidst these thundering pronouncements, Habakkuk does offer hope, declaring that “the earth will be filled with the knowledge of the glory of the Lord, as the waters cover the sea” (2:14), and imploring the people, “the Lord is in his holy temple; let all the earth keep silence before him!” (2:20). He affirms that God’s “glory covered the heavens, and the earth was full of his praise” (3:3)—but that glory will swiftly lead to “the days of calamity” (3:16).

Habakkuk is best known for just one part of one verse, “the righteous live by their faith [or faithfulness]” (2:4b), for this verse stands as the text upon which Paul developed his important theological statement in Romans: “in it [the gospel] the righteousness of God is revealed through faith for faith; as it is written, ‘the one who is righteous will live by faith’” (Rom 1:17). As well, Paul quotes this verse in his letter to the Galatians (Gal 3:11) and the verse is cited in the “word of exhortation” sent to the Hebrews (Heb 10:38).

In the context of Habakkuk’s prophetic activity, this verse is the word that God gives to the prophet, responding to his complaints about what sufferings are taking place. God is “rousing the Chaldeans, that fierce and impetuous nation,who march through the breadth of the earth to seize dwellings not their own” (1:6), and through their dreadful and fearsome activities, God is “destroying nations without mercy” (1:17).

Habakkuk laments and complains; God instructs him to “look at the proud—their spirit is not right in them”, and to be assured that “the righteous live by their faith” (2:4). The theme of righteousness that is signalled here by the prophet is a central motif in Hebrew Scriptures. It appears in the ancestral stories concerning the key figures of Abraham (Gen 15:6), Saul (1 Sam 26:23), David (2 Sam 22:21–26; 1 Ki 3:6), and Solomon (1 Ki 10:9).

Nahum starts with a clear declaration: “a jealous and avenging God is the Lord, the Lord is avenging and wrathful” (Nah 1:2). He expands on this with a series of images showing how God’s power is manifested in punishments (1:3–11). Idolatry, once again, lies at the root of the problem: “Your name shall be perpetuated no longer; from the house of your gods I will cut off the carved image and the cast image; I will make your grave, for you are worthless.” (1:14).

His oracle contains a long and troubling list of “devastation, desolation, and destruction” (2:10) which is enunciated in dramatic imagery: chariots and horsemen charging, piles of dead bodies, and the debaucheries of a prostitute (3:1–4). Because of this, says God, “I will lift up your skirts over your face; and I will let nations look on your nakedness and kingdoms on your shame; I will throw filth at you and treat you with contempt, and make you a spectacle” (3:5–6).

The people who are the recipients of Nahum’s words are not from Judah, for he addresses the people of Nineveh (1:1), the capital of Assyria. Assyrians had invaded the northern kingdom of Israel in 721 BCE and conquered Thebes in 663 BCE (3:8–10); there, as in other places, they demonstrated a savage brutality. However, in 612 BCE the Assyrian dominance had given way to the new power, the Babylonians (this seems to be reflected in 3:7).

Nahum holds firm to the claim that that God will punish Nineveh: “the fire will devour you, the sword will cut you off, it will devour you like the locust” (3:15). The die is cast; “there is no assuaging your hurt, your wound is mortal” (3:19). His final words are scathing: “all who hear the news about you clap their hands over you; for who has ever escaped your endless cruelty?” (3:19).

Zephaniah also does not mince words; his opening statement is “I will utterly sweep away everything from the face of the earth, says the Lord” (Zeph 1:2), cataloguing a complete cosmic catastrophe. “Be silent before the Lord God, for the day of the Lord is at hand”, he exhorts (1:7). Those who complacently assert, “the Lord will not do good, nor will he do harm” (1:12), will find that their trust in that mantra will be shattered, for “the great day of the Lord is near, near and hastening fast” (1:14).

The familiar declaration of the “day of wrath, a day of distress and anguish, a day of ruin and devastation, a day of darkness and gloom” (1:15) shapes the oracles that Zephaniah delivers; the prophet itemises the punishments on Israel’s enemies (2:1–15) and on Jerusalem herself (3:1–7). On “Canaan, land of the Philistines”, God declares, “I will destroy you until no inhabitant is left” (2:5). To the south-east, “Moab shall become like Sodom and the Ammonites like Gomorrah, a land possessed by nettles and salt pits, and a waste forever” (2:9).

Looking north to Assyria, Zephaniah hyperbolically claims, “what a desolation it has become, a lair for wild animals!” (2:15). In Jerusalem, corruption is rife: “the officials within it are roaring lions; its judges are evening wolves that leave nothing until the morning; it’s prophets are reckless, faithless persons; its priests have profaned what is sacred, they have done violence to the law” (3:3–4).

Yet he ends with a declaration of hope (3:8–13) and a psalm-like celebration of the ultimate restoration which God promises: “sing aloud, O daughter Zion; shout, O Israel! rejoice and exult with all your heart, O daughter Jerusalem!” (3:14), for this will be a time when “I will save the lame and gather the outcast, and I will change their shame into praise and renown in all the earth … when I restore your fortunes before your eyes” (2:19–20).

The prophecy echoes what Micah, a century before him, had seen: “I will assemble the lame and gather those who have been driven away, and those whom I have afflicted: the lame I will make the remnant, and those who were cast off, a strong nation” (Mic 4:6–7). It’s a wonderful vision!

It also resonates with Isaiah’s vision of when “the eyes of the blind shall be opened, and the ears of the deaf unstopped; then the lame shall leap like a deer, and the tongue of the speechless sing for joy” (Isa 35:5-6)—a passage which itself inspired the way that the ministry of Jesus could be reported: “the blind receive their sight, the lame walk, the lepers are cleansed, the deaf hear, the dead are raised, the poor have good news brought to them” (Luke 7:22).

Finally, in the shortest book in the Hebrew Scriptures, Obadiah repeats the message of his contemporaries about the punishment of God; however, he has in view the people of Edom, to the south of Judah (1:1), whom God will make “least among the nations” (1:1–4). The oracle of judgement that Obadiah delivers is directed to the Edomites, who helped to capture Israelites who were fleeing when the might of the Babylonian army took control of their territory (2 Kings 24–25).

Because they share a common ancestry with Judah—the Edomites descend from Esau, the Judahites from Jacob (Gen 25:21–26, 30)—God is angered with them for not assisting the fleeing Judahites (see the repeated “you should not have …” in verses 12 to 14).

Obadiah describes the day when “strangers carried off his wealth, and foreigners entered his gates and cast lots for Jerusalem” (1:11), when the Edomites gloated over the misfortune of the Judahites, looted their cities, and “handed over his survivors on the day of distress” (1:12–14). For these people, too, there is “a day of the Lord” in which retribution will be enacted (1:15–16). Punishment is severe and complete: it shall be “as though they had never been” (1:16).

Yet, as with other prophetic voices, Obadiah too foresees that God will not abandon his holy people; the book ends with a short recitation of the geographical areas which are to be allotted to returning exiles, and “those who have been saved shall go up to Mount Zion to rule Mount Esau; and the kingdom shall be the Lord’s” (1:17–21). There is still hope.

Footnote: Ten of the Minor Prophets, and all four Major Prophets, appear in the Revised Common Lectionary—some of them (like Isaiah and Jeremiah) appear many times. The two Minor Prophets who miss being in the lectionary are Nahum and Obadiah. 😢