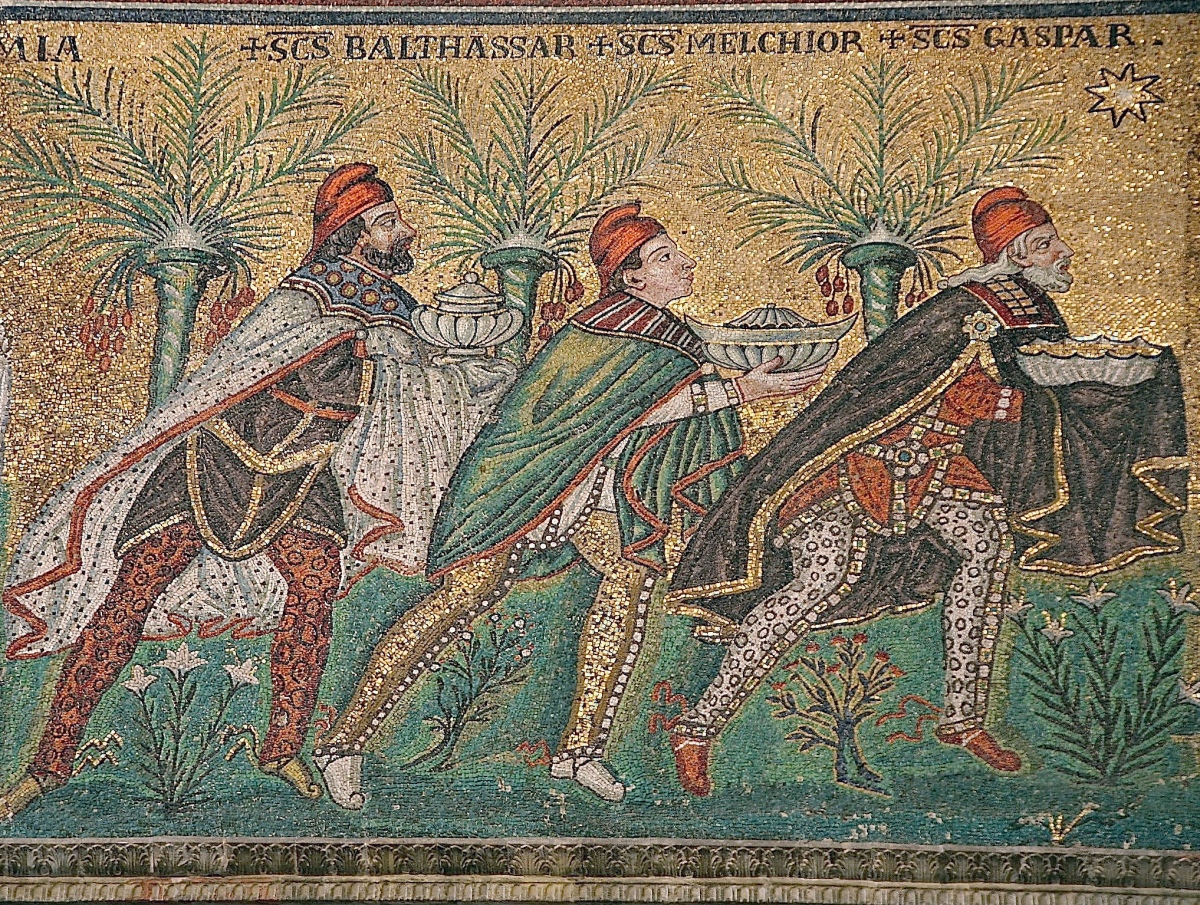 A carol-commentary for the Festival of Epiphany
(a little weird, a little forced, perhaps a little sin-ical ?)

WE: the first person plural subject of the song, suggesting this comes straight from the horse’s mouth, so to speak

THREE: or perhaps four, or maybe seven, or even twelve, or some other indeterminate number, since the initial story does not specify the precise number of subjects in the story

KINGS: or some say wise men, or others say sages, which they offer as an interpretation of the term magus, used in the initial narrative … so perhaps the subjects of the song are Zoroastrians, for whom star-watching was a highly-developed skill.

OF ORIENT: or, lands east of Israel, so perhaps Babylon, or even further to the east, in Parthia, where the Zoroastrian faith was dominant

ARE: the main verb, denoting the existential state of being of the subjects

BEARING: adverbial participle, descriptive of the activity of the aforesaid subjects of the song

GIFTS: by tradition, three of them [see below], which goes to explain why you might think there are three of the subjects [see above] … and providing grist for the mill for the idea that these subjects were kings, since Psalm 72:10-11 speaks about kings bringing gifts to the King of Israel

WE TRAVERSE AFAR: presumably on camels, the deluxe form of transportation of the time … although ………

FIELD AND FOUNTAIN, MOOR AND MOUNTAIN: a little bit of poetic excursus, a selective account of the natural phenomena encountered on the journey, arranged in alliterative couplets (it feeds the creative imagination of the listener/singer, you see)

FOLLOWING: another adverbial participle, providing a second description of the activity of the subjects

YONDER STAR: a bright celestial phenomenon, shining in the eastern sky but apparently moving or pointing in the direction of Israel, which was dutifully followed by the subjects

Born a King on Bethlehem’s plain / GOLD I bring to crown Him again /
King forever, ceasing never / Over us all to reign:
which explains the claim that the subjects of the song are kings, as the gift of gold was what the kings of the nations bring to the Lord God when they travel to Jerusalem, according to Isaiah 60 verses 3 and 6–bearing in mind the injunction of Exodus 20:23, that this gift of gold not be in the form of any idol

FRANKINCENSE to offer have I / Incense owns a Deity nigh /
Prayer and praising, all men [oops!] raising / Worship Him, God most high:
in relation to the gift of frankincense, as already noted above, the kings of the nations bring this to the Lord God when they travel to Jerusalem, according to Isaiah 60 verses 3 and 6 … and, ahhh, presumably there has been a divine change of mind since Isaiah 1:13, where the Lord God declared that “bringing offerings is futile; incense is an abomination to me” ?

MYRRH is mine, its bitter perfume / Breathes of life of gathering gloom /
Sorrowing, sighing, bleeding, dying /Sealed in the stone-cold tomb:
curiously, there is no scriptural tradition about kings bringing myrrh to the Lord

Nevertheless, myrrh certainly featured as a gift in the religious practices of Israel, according to Exodus 30:23–27 (The LORD spoke to Moses: “Take the finest spices: of liquid myrrh five hundred shekels, and of sweet-smelling cinnamon half as much, that is, two hundred fifty, and two hundred fifty of aromatic cane, and five hundred of cassia—measured by the sanctuary shekel—and a hin of olive oil; and you shall make of these a sacred anointing oil blended as by the perfumer; it shall be a holy anointing oil’ — an oil to anoint “the tent of meeting and the ark of the covenant, and the table and all its utensils, and the lampstand and its utensils, and the altar of incense, and the altar of burnt offering with all its utensils, and the basin with its stand”)

And let’s not make any link to the scene in Revelation 18:11-13, where the merchants of the world lament the fact that nobody is purchasing their goods any longer … goods which include, amongst many options, gold, and frankincense, and myrrh …

Glorious now behold Him arise / King and God and Sacrifice /
Alleluia, Alleluia / Earth to heav’n replies:
adhering to the Golden Evangelical Rule of always taking the opportunity to smuggle Easter and the Cross and the Sacrifice of Jesus into any song or sermon or worship service or, even, Christmas/Epiphany Carol!

And for more exotica on the Magi, see