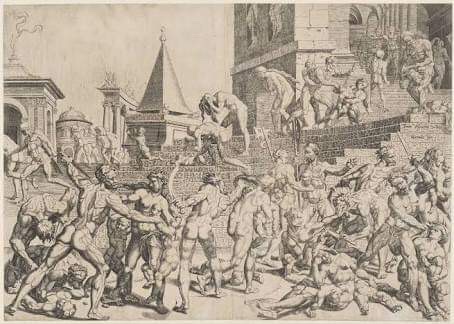 Today (in the Western Church) is designated as the Feast of the Holy Innocents. (It is celebrated tomorrow in the Eastern Church.) This festival day commemorates a tradition known as “the slaughter of the Innocents”, reportedly ordered by King Herod.

The tradition is that when Herod learnt of the birth of “the King of the Jews”, he feared that this king would pose a threat to his own rule (as a client king under the Roman Empire) over the Jewish people. Herod, it is said, ordered that all male children under two years of age should be killed, to ensure that this rival king was safely despatched. Jesus survived this because Joseph was advised of the imminent pogrom in a dream, after visitors “from the east” had come to him, Mary, and the child, via the court of Herod.

The story is told only in Matthew’s Gospel. I believe that it is highly unlikely that the events reported by Matthew actually took place. (Other interpreters take a different view.)

Why? Well, first of all, Matthew provides the only account of such an event in any piece of literature from that time. I reckon that an event with so many deaths would surely have been noted by other writers. Yes, it is true that Herod was a tyrannical ruler; but amongst the various accounts of his murderous deeds, there is nothing which correlates to the events reported in Matthew’s Gospel.

But this non-historical story is important for theological reasons. It is part of the foundational myth of the Christian faith. The writer of Matthew’s Gospel wants to make strong correlations between Jesus and Moses. This starts in the mythological account found in the opening chapters, and continues throughout the following chapters of the Gospel.

As myth, the tradition points to important truths. The slaughter of the Innocents grounds the story of Jesus in the historical, political, and cultural life of the day. It provides a dreadful realism to a story which, all too often in the developing Christian Tradition, has become etherealised, spiritualised, and romanticised.

So we remember this story as an important pointer to the counter-cultural, alternative-narrative impact of the person of Jesus. It is not history, but it offers a powerful myth.

A medieval hymn which remembers this tradition is the Coventry Carol. This dates from the 16th century, when it was performed in Coventry, England, as a part of a mystery play entitled “The Pageant of the Shearman and Tailors”.

The single surviving text of this pageant (including the words of this carol) was published by one Robert Croo, who dated his manuscript 14 March 1534. The carol is in the form of a lullaby, sung as a poignant remembrance by the mother of a child who is doomed to die in the pogrom.

O sisters too, how may we do

For to preserve this day

This poor youngling for whom we sing,

Herod the king, in his raging,

Charged he hath this day

All young children to slay.

That woe is me, poor child, for thee

And ever mourn and may

For thy parting neither say nor sing,

One thought on “The counter-cultural, alternative-narrative impact of the person of Jesus”