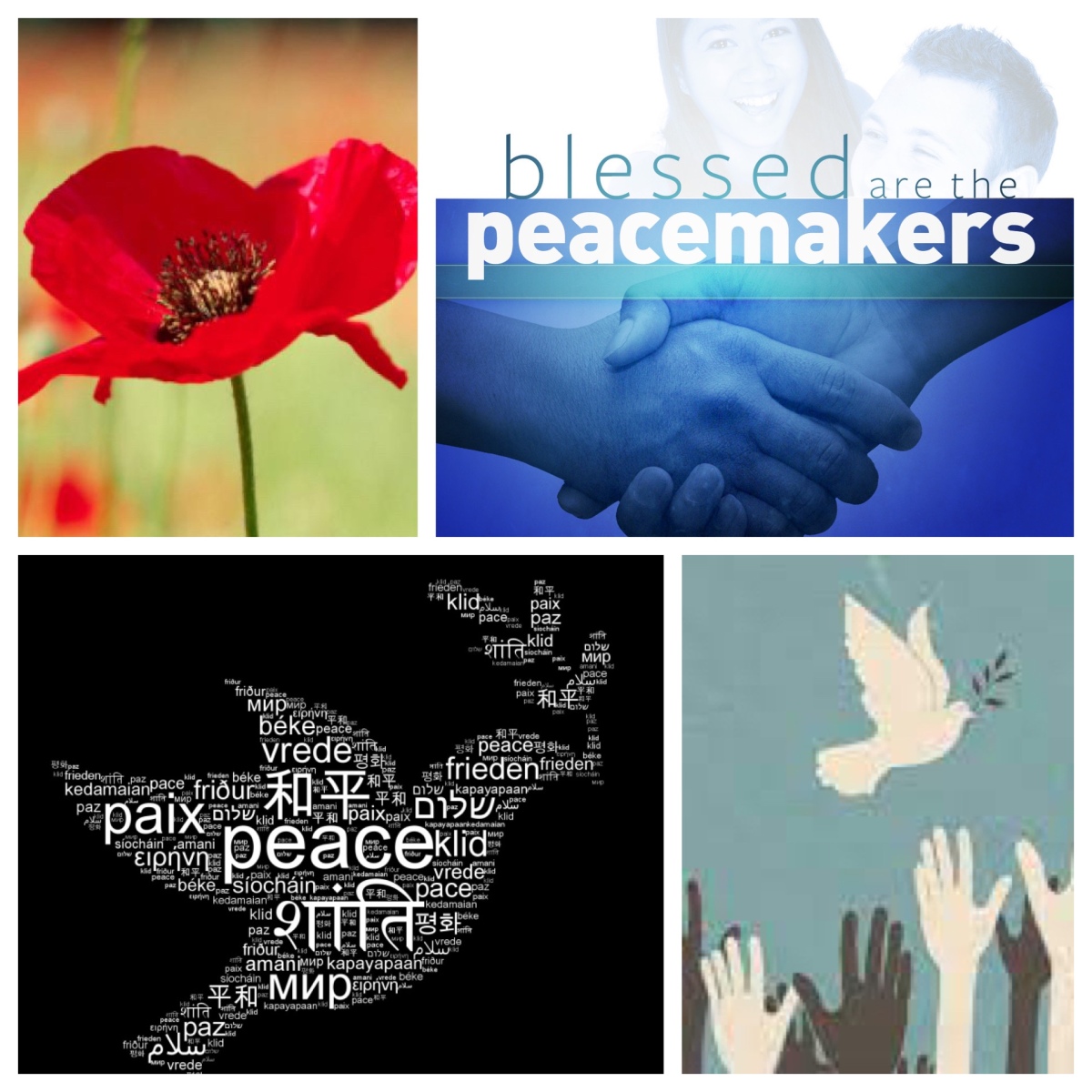 Today there is one of those regular reminders that occur in social media, about remembering war—the victims of war, those who have died, the consequences of armed struggle.

It is a good day to remember, also, that the Gospel is a call to peacemaking and reconciliation. This is at the heart of the commitments that the Uniting Church in Australia, amongst many other churches, has made over the decades.

At the Tenth Assembly in 2003, the Uniting Church affirmed “that God came in the crucified and risen Christ to make peace; and that God calls all Christians to be peacemakers, to save life, to heal and to love their neighbours; and that the Church is committed to be a peacemaking body”. (Uniting for Peace, Tenth Assembly, Uniting Church in Australia) A number of the UCA statements and resources relating to peacemaking are collected at https://www.unitingjustice.org.au/uniting-for-peace

Peacemaking has been a central concern of the Uniting Church since its inception in 1977. As early as 1982, the Assembly made a major statement on peacemaking, with two clear declarations: first, that “God came in the crucified and risen Christ to make peace [and] He calls all Christians to be peacemakers, to save life, to heal and to love their neighbours”; and second, that “the call of Christ to make peace is the norm, the onus of proof rests on any who resort to military force as a means of solving international disputes” (Militarism and Disarmament, 1982).

In 1988, in a Statement to the Nation issued for the Australian Bicentennial, the church declared, “In cooperation with all fellow Australians of goodwill, we are committed to work for justice and peace, calling for honesty and integrity, encouraging tolerance and compassion, challenging acquisitiveness and greed, opposing discrimination and prejudice, condemning violence and oppression and creating a loving and caring community”.

At that same Assembly, a statement on Nuclear Deterrence, Disarmament and Peace was also issued, with the statement that “All Christian affirmation about peace is grounded in the declaration that Jesus Christ is our peace. Through him the power of evil, sin and death is decisively broken, and the hostile and alienated world is reconciled to God and is itself renewed. We speak in hope, trusting God’s promise of the final transformation of all things.”

In 2003 the Assembly adopted an extensive statement entitled Uniting for Peace. In this statement the Uniting Church promised to “work together for peace, justice and reconciliation at the local, national and global level and in collaboration with local communities, secular movements, non- government agencies and people of other faiths”. We declared that we embraced “creative approaches to peacebuilding which are consonant with the spirit of the Gospel” and that we sought to “empower people who are systematically oppressed by violence, and to act in solidarity with those struggling for justice, peace and the integrity of creation”. The Statement also indicated an intention to “repent of our complicity in violence and attempt to overcome the spirit, logic and practice of violence”.

For the International Day of Peace in 2016, the church issued a resource which explored three important “Building Blocks for Peace— gender equality, climate justice, and nuclear disarmament”. See https://www.unitingjustice.org.au/images/stories/PDFs/160909_Peace_IDPResource2016.pdf

Continuing this commitment to peace today is important. One member of the Uniting Church, Len Baglow, has written this helpful piece on making peace, in which he gives serious consideration to a difficult question: “what does it mean in our time to be a peacemaker?” He indicates that he writes “to encourage others to join in this adventure that scripture calls peacemaking. I would particularly urge leaders in the Church community to see peacemaking not as a peripheral activity, but something which is urgent for our times.”

Len notes that IPAN, the Independent and Peaceful Australia Network, is planning a national conference later this month, at which there will be consideration of AUKUS and the current threat of war for Australia, as well as sessions on “building the peace movement: planning collaborative activism”. The details of the programme and registration are at

Continuing the commitment to making peace that Jesus articulated is an integral and important part of Christian discipleship in the contemporary world. May the resolutions of this conference and the networks that it builds contribute to the ongoing work of making peace and forming reconciliation in our fractured world.

I have recently taken part in a most interesting series of conversations, on topics that are quite unlike others that I have participated in. I’ve been one of three members of the “Moon Knight Panel”, discussing the six episodes of this show, Moon Knight, which was released earlier this year on Disney Plus. The three of us—Will in Melbourne, Praxis in Hobart, and myself in Canberra—have recorded a series of seven podcasts that explore the issues that arise in each of the six episodes of Moon Knight. (Seven podcasts for six episodes, as the first podcast is an introduction to the panel members.)

The six episodes were released by Marvel Entertainment, which began life as the publisher of comic books (Spider Man, Doctor Doom, Captain America, She-Hulk, and Wolverine, amongst many others). It has now expanded to be a film production enterprise. Moon Knight is a character in Marvel comics, and this series represents a stepping-up from the role that Moon Knight has had in the printed comic books, for this character to become the star of his own television miniseries. The six episodes contain action, adventure, violence, drama, and suspense—it’s a really well-done artistic creation.

Moon Knight first appeared as a character in a 1975 comic, Werewolf by Night #32, where his character was a villain, aiming to kill Werewolf. Moon Knight continued to appear in various comics in subsequent years, in which he turns to become a “good guy”. His first solo series, Moon Knight #1, was published in 1980. There is a whole complex story that has evolved over the decades, as Moon Knight has appeared, as himself and in various guises, in various comic series during that time. I entered into this podcast series, however, in blissful ignorance of that long history of Moon Knight; I was viewing the episodes with Paul Ricouer’s “first naïveté”.

My involvement in the panel has come about, not because I am a Marvel comic aficionado—I am not—nor because I am a Disney Plus subscriber—I am not—and not even because I am an action movie buff—I most certainly am not! It was because the episodes reveal a situation in which the human character who is to the fore at the start of the first episode, mild-mannered British gift-shop employee Steven Grant, is revealed to have Dissociative Identity Disorder (DID), and DID is something that I know about quite closely, from my own lived experience of the condition.

Steven Grant actually turns out to have been an identity created by Marc Spector, a Jewish-American mercenary who has been implicated in numerous murders. The series provides a gradual revelation of the relationship between Marc and Steven—and by the last episode, leaving us on the expected cliffhanger, we are aware that there is yet another identity, Jake Lockley, lurking in and around Marc and Steven. Jake is a ruthless Spanish assassin; how he figures in the complex scenario will, we presume, be revealed in the second series, yet to be recorded (although readers of the printed comics will have a good understanding of this already).

Dissociative Identity Disorder (DID) was previously known as MPD (Multiple Personality Disorder), and it was MPD that I was diagnosed with about 30 years ago. The process of therapy that led to this diagnosis was a thoroughly challenging and deeply disturbing process for me. The therapy that followed, enabling me to deal with the dissociated identities that were lurking in my being, was a comprehensive and exhausting marathon over some years. I haven’t spoken about this before to many people in my life—and certainly never in such a public way as I have in the podcasts and now in this blog.

The series does a fine job, in my estimation, of portraying the confusion, disturbance, incomprehensibility, and fear that comes with a diagnosis of DID. Although I did not have many dramatic experiences of suddenly finding myself in a foreign and unknown situation—which is what happens, very dramatically, to Steven Grant in the earlier episodes—I certainly had the experience of complete and absolute confusion, of finding myself “gripped” in an intense way by a personality or force that felt quite alien, of enacting behaviours that were completely uncharacteristic for me and deeply troubling for others. All of these things are portrayed with vivid drama in the Moon Knight series—far more dramatically than what my own experiences were, but resonating deeply with the experiences I had, which still remember very clearly.

The series also accurately depicts the sheer exhaustion of the process of “switching” identities—something that was a very real experience for me in the height of the time when my “personalities” were emerging. Such “switching” would happen without warning, many times in a fierce, dramatic way. The sense of suddenly being “taken over” by another identity was an intensely draining experience for me, even when it happened in a relatively “smooth” way. So the dramatic portrayals of this aspect in Moon Knight, whilst not entirely “realistic” for me, certainly convey the intensity and dramatic impact of how such experiences felt at the time.

One critic of the comic book character made this assessment a few years ago: “When you look at Moon Knight’s story as a whole, it appears to be more and more of a story about perseverance, endurance, and coming to grips with who you are. That’s an extremely universal story. That’s something anyone can relate to, in one way or another. It’s a call to believe in yourself, and to never give up. And, really, that’s one of the most heroic tales you can get.” (Matt Attanasio, https://comicsverse.com/moon-knight-mental-health/, 22 May 2018)

That is a very positive and affirming conclusion for me to take from this story, and from my own experience. I hope that this is sensed by those who watch the television series. You don’t need to have experienced the condition of DID to take this lesson to heart.

The link to the first podcast (introducing the Moon Knight Panel) is at https://open.spotify.com/episode/5feSJb2qyVAhzBEfoeHj1x?si=29983b58d694477d

The podcast on Episode One is at https://open.spotify.com/episode/0Rk2PZKSvqKcc7yigju8pn?si=f7tXj0jnRk2ph9o1UpgKSw

I invite you to have a listen and explore these fascinating (and challenging) issues.

Good information about DID can be found at https://www.sane.org/information-and-resources/facts-and-guides/dissociative-identity-disorder