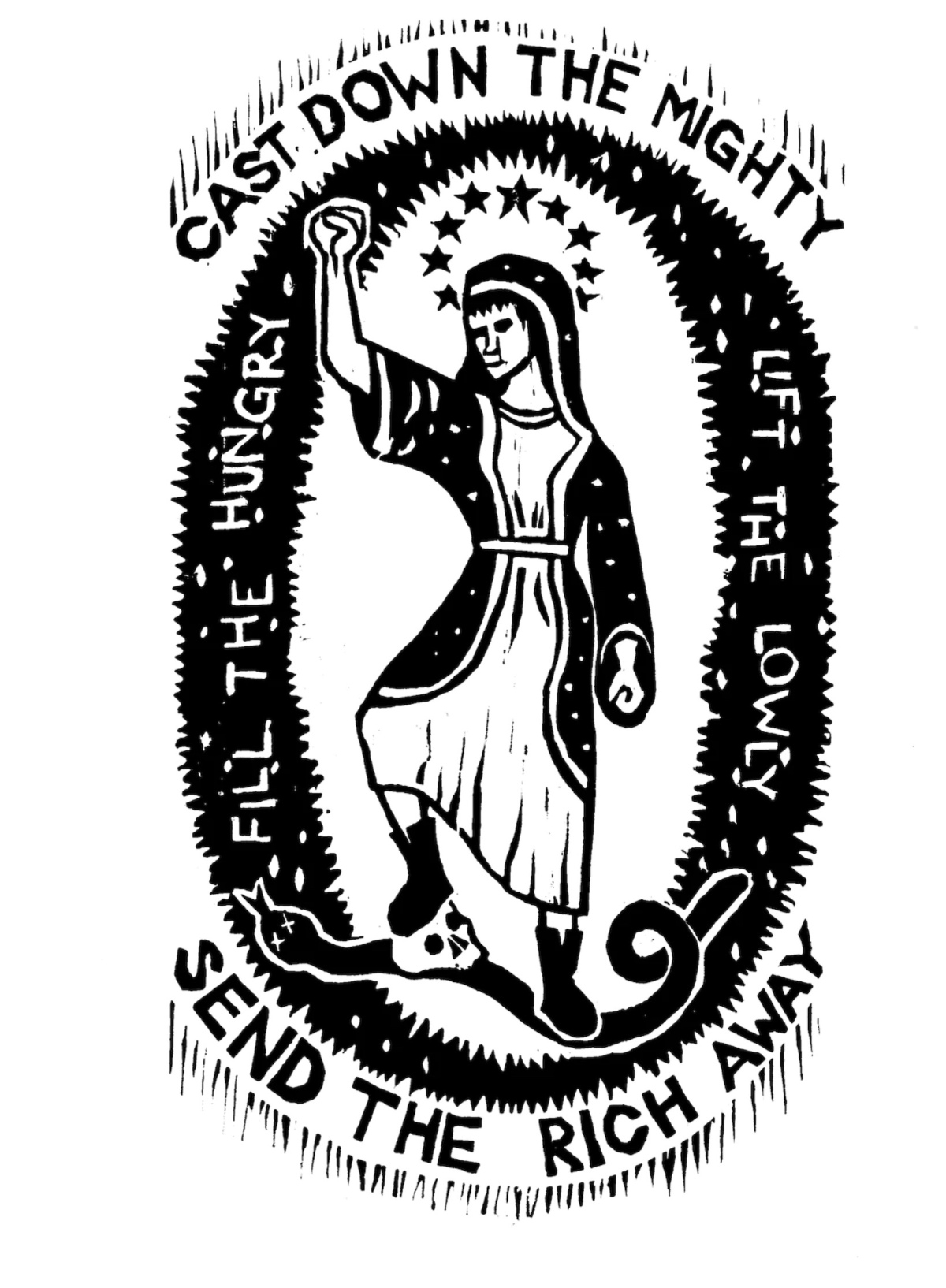 A sermon preached by the Rev. Elizabeth Raine at Tuggeranong Uniting Church on Sunday 11 December, the third Sunday in the season of Advent.

Which images most readily come to mind, for you, when you think of Mary, the mother of Jesus?

The words most Christians use when asked to describe Mary are words like: humble, obedient, meek, mild, submissive, virgin. Mary is frequently depicted as a most faithful and obedient role model, indeed Mary is set forth as an impossible role model as both virgin and mother.

She has been used by the church over the years to emphasise feminine obedience to male leaders of the church, to fathers, to husbands and indeed, to men generally. Mary was particularly useful in the early church centuries as a way ofinsisting that women should be submissive.

The church tradition of Mary of the pale faced, blue veiled, blue eyed portraits tame her fierceness, and domesticate her passion. Are these the characteristics that really portray someone obedient to the will of God? Or do we see something different emerging from the portrait of Mary and the Magnificat?

Consider the context of this song: Mary’s pregnancy dispenses with theneed for a man. In a patriarchal world, this must have been considered profoundly unsettling news, even if God is named as responsible. From the start of her story, Mary simply isn’t going to be following the acceptedsocial norms. From the beginning, the character of Mary in Luke’s gospelis dangerously full of the Spirit and impregnated with the impossible.

Consider the content of this song: Mary prophesises the overturning of the entire social order, proclaiming that the lowly will be lifted up, the powerfulwill be brought down from their thrones, the rich turned away empty while the hungry are filled. Mary, this teenage mother, has just stepped into an unprecedented and dangerous arena. She has established herself as seditious in her intent, for any talk of a new Davidic line would have been considered treasonable in the then Roman-occupied Palestine.

Consider the tradition of this song:

Firstly, Mary stands in the tradition of the courageous and somewhat unusual women we find in Matthew’s genealogy, all who survived hardship, oppression or violence.

Tamar, when denied a marriage under the Levirate law, tried to make the best of a bad situation by getting herself pregnant by her father in law, who then threatened to burn her.

Rahab, the prostitute, who helped Israel at great risk to ensure their victory and her escape from Jericho.

Naomi, who used Ruth to preserve her own life and security by telling her to, ‘Sleep at Boaz’s feet’, i.e. have sex with him, thereby risking Ruth to exposure and shame and possible violence.

Bathsheba, the unhappy victim of David’s voyeurism, has her husband murdered by David, who she is then forced to marry. She also loses her baby.

Secondly, Mary has just established herself as a radical prophet, and stands firmly in the prophetic tradition of her culture known for its uncompromising fierceness. She echoes the scriptures which speak of God acting to uphold the people of Israel: Moses and Miriam’s song (Exodus 15), Hannah’s song (Samuel 2), and many of the psalms. It would appear that Mary’s early education was not focused on just keeping a proper Jewish home, but rather on radical study of scripture. Mary sings her own anthem of revolution, and in doing so, sings the whole world upside down.

How then does this, and should this, relate to us?

Mary’s words still have great resonance in our time, when dictatorships are again realities, when countries compete in new ways as grapple withthe coronavirus pandemic and the war in Ukraine, when the rich are being given permission by their leaders to tramp, literally and metaphorically, on the poor; when we ignore the safety of others by refusing to wear a maskand when national economic plans are put in place, rather than globalones to combat poverty, disease and climate change.

How many among us in these difficult times, times where fear and anxiety stalk our streets and our computers, ipads and smart phones, where racism, sexism and various types of assault are increasing in number, are moved to concentrate our attention on the abandoned and oppressed? Are we really become more selfish and mean-spirited and inwardlyfocused? If we are, then the Magnificat is the wake up call. It calls us toaffirm the hidden ones of the earth, propelling us all to emerge from ourfour walls and walk in solidarity and love with those in the shadows. It is an invitation to rediscover the kind of people God favours and who God is constantly inviting to the heavenly banquets.

Unless we do something, the meek will not inherit the world we have created, which clearly belongs to the powerful. In our consumerist society, people can even shop around churches now, and choose their own tailor-made religious beliefs. We rationalize our own sins away. We prefer to be self-made men and women, rather than surrendering ourselves and our will and our lives to God.

Mary’s obedience to God isn’t about individualism or herself, and the blessing that she asks for isn’t the kind of blessing most of us might ask for when we pray. She has said ‘yes’ to God without knowing what God will do. She is potentially submitting to humiliation, physical pain, dislocation, terror, and loss. She is prepared to lose herself to become the bearer of the one who brings salvation and justice.

Mary’s submission to God isn’t passive, and it is not without doubt. Shehas chosen a perilous path – that of someone who dares, who questions the status quo, who is prepared to step out and take risks. To do the will of God means to live dangerously, to put community before individual, to choose justice rather than what is easy and comfortable.

Furthermore, there is a risk in accepting the blessing of God. Mary just states she will be called blessed, but this blessing presumably is not one she would choose. The blessing Mary receives will be agonizing, as it means seeing her child tortured and killed on the cross. Could we bear such a blessing as this?

Whatever our answers might be to these questions, like Mary, we should not be passive in this process of obedience to God’s will. We need to work and to pray and to dream and to prophesy and to act as bravely and intelligently and faithfully as she did. And we must also be prepared to risk and step into the unknown, and like Mary, say yes to God’s plan withoutnecessarily knowing what will happen next.

Spill the Beans recounts how “this song of Mary has upset and annoyed governments, who have refused to let it be spoken, and people of faith who would rather surrender to the Victorian romance of Christmas, interrupts all of that with the core theme of incarnation.”

And Mary’s song also points to the very heart of Christianity, the passion of Jesus. It is the closest we get in Advent to the darkest, most frightening, most transcendent moment found in all of the Gospels – the moment on the cross, when Jesus surrenders his will, his hope, his very life, and puts everything in God’s hands. Like his mother Mary, Jesus’ actions did notcome from passive obedience but are a passionate surrender to the will of God.

And so, God interrupts Mary’s life with this promise of a mixed blessing, and in doing so, challenges a nation, the powerful, the politicians and the theologians. Even today, these words should still challenge the church, the Christmas season and the entire world with a reminder of what is possible.

Mary, blessed, revolutionary, and believer in the impossible, wild and liberated, and committed to the cause: Inspire us with your courage and wisdom and faith, that we may also say yes to life in the face of death; that we too may give birth to a miracle.