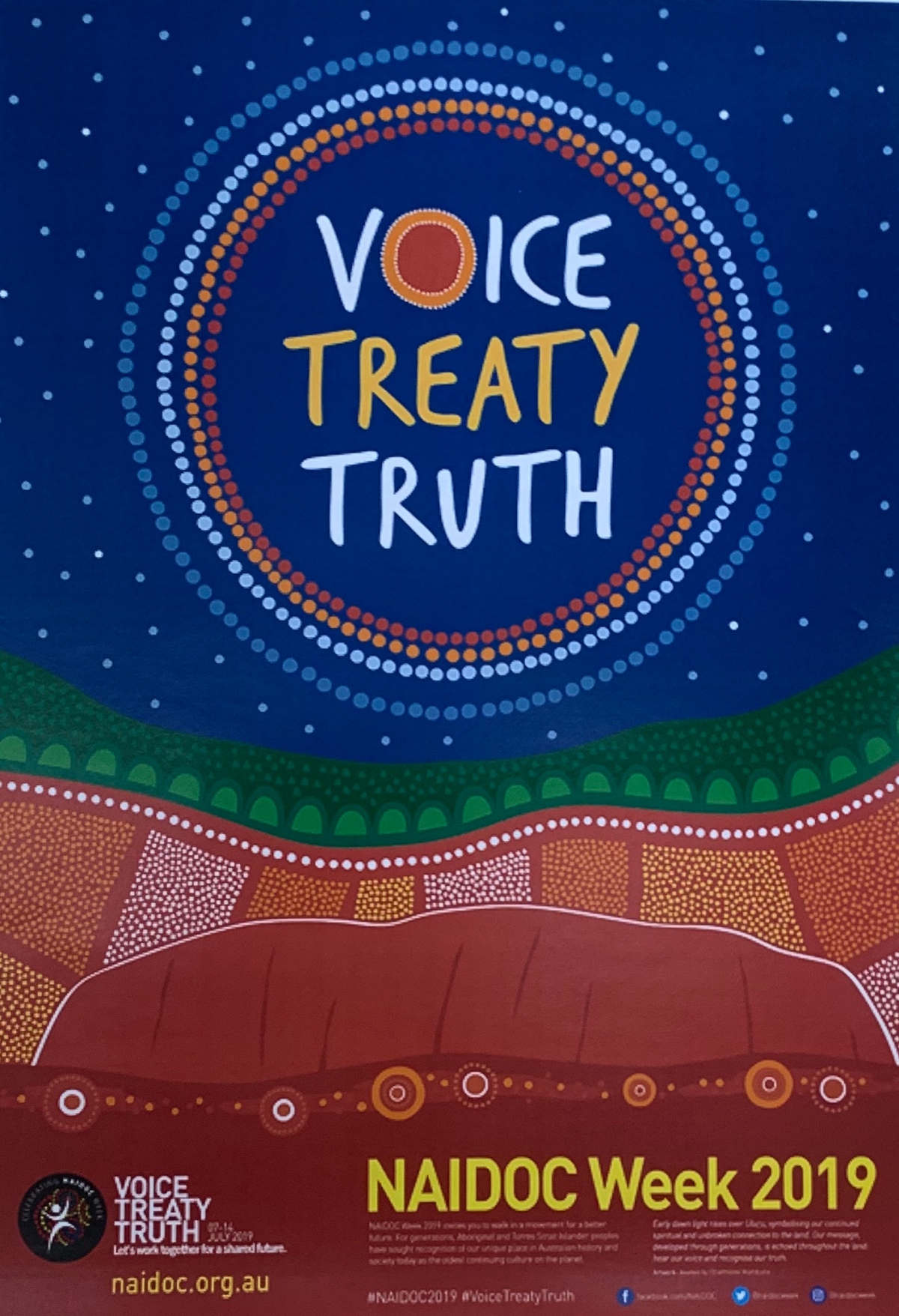 NAIDOC Week runs for a week each July. NAIDOC originally was an acronym for the National Aborigines and Islanders Day Observance Committee. The organising committee behind the day adopted this name in 1991. It has been held, as a week, each year since then.

The theme for NAIDOC Week 2019 is Giving Voice, Telling Truth, Talking Treaty. This is something that all Australians should support. And this is certainly something that people within the Uniting Church are able to support.

The Uniting Church has given voice to First Peoples. Twenty five years ago the Uniting Church entered into a covenant relationship with the Uniting Aboriginal and Islander Christian Congress. The Covenant is an expression of how we seek to listen to the voice of First Peoples. (See https://assembly.uca.org.au/news/item/3035-the-25th-anniversary-of-the-covenant and https://assembly.uca.org.au/resources/covenanting/item/135-covenanting-statement-1994)

The Uniting Church is committed to telling truth. This truth is confronting and challenging. In the revised Preamble which was adopted a decade ago by the Uniting Church, we sought to tell the truth. Drawing on the voices of Indigenous Peoples, we have named the settlement of this continent as a colonising movement, generated by foreign imperialism, manifesting in violent invasion and genocidal massacres, spread from north to south, from east to west, of this continent. We must continue to prioritise this commitment to tell the truth. (See https://johntsquires.com/2019/01/16/the-profound-effect-of-invasion-and-colonisations/)

Likewise, at the 14th Assembly, we decided to repudiate the Doctrine of Discovery, that medieval theological foundation upon which the worldwide invasion and colonisation of lands was based—including the invasion and colonisation of Terra Australis. This has been part of our commitment to tell the truth. (See https://johntsquires.com/2018/08/13/affirming-the-sovereignty-of-first-peoples-undoing-the-doctrine-of-discovery/)

And the Uniting Church is committed to talking treaty. We are supportive of the formalisation of treaties with the various nations of Peoples who have inhabited, nurtured and cared for this land since time immemorial. This commitment is based on a recognition of the Sovereignty of each of those nations, sovereignty over the land that the people have inhabited, nurtured, and cared for over those many millennia.

Sovereignty, as articulated in the Statement from the Heart of 2017, is understood by the First Peoples as a spiritual notion, reflecting the ancestral tie between the land and the First Peoples (see https://johntsquires.wordpress.com/2018/10/13/on-covenant-reconciliation-and-sovereignty/ and https://johntsquires.wordpress.com/2018/10/13/on-covenant-reconciliation-and-sovereignty/)

Each of the hundreds of nations found before 1788 on this continent hold that sovereignty. The 15th Assembly of the Uniting Church recognised this sovereignty. This current proposal seeks to take the next step with regard to this sovereignty. A treaty between the governments of the invading, colonising settlers and the long-existing nations of First Peoples, is the logical next step. That is the pathway stretching out ahead of us.

Labor governments in Victoria and South Australia have already committed to signing a treaty with Indigenous peoples. SA has appointed a treaty commissioner, Roger Thomas, to consult with Aboriginal communities and help negotiate individual clan-based treaties. This work is now underway and resulting in regional treaties.

Victoria has also appointed a treaty commissioner, Gunditjmara woman Jill Gallagher, who will oversee the development of an elected representative body which will negotiate with the Victorian government on behalf of Victoria’s Aboriginal peoples. (See https://www.google.com.au/amp/s/amp.theguardian.com/australia-news/2019/apr/11/victoria-a-step-closer-to-indigenous-treaty-with-creation-of-first-peoples-assembly)

In NSW, the Aboriginal Land Council has a Strategic Plan which sets its direction. The Plan commits to an ambitious agenda of cultural protection, social wellbeing and economic development. In 2019, it now adds a new political call: that there be a process for establishing a Treaty or Treaties between the NSW Government and the Aboriginal people of this state. (See

The current NSW state government needs to be pressed with regard to this issue. It is not an optional matter. It is core business.

Finally, the Federal Government needs to be lobbied to return to the process set up some years ago, working towards reconciliation. National governments have formalised treaties with Indigenous peoples in New Zealand and Canada, and parts of the United States of America. (See https://www.google.com.au/amp/s/theconversation.com/amp/why-the-indigenous-in-new-zealand-have-fared-better-than-those-in-canada-84980)

The establishment of a Makarratta Commission within Australia, to oversee and facilitate the making of treaties, is essential to our national wellbeing. As a church, we should be strongly committed to encourage that process.

At the 2019 meeting of the Synod of NSW and the ACT, we have now agreed by consensus to enact a series of proposals to give support to the theme of Giving Voice, Telling Truth, Talking Treaty. A similar proposal was adopted by the Synod of Victoria and Tasmania. The church is committed to reconciliation, giving voice, telling truth, and working to secure treaties. 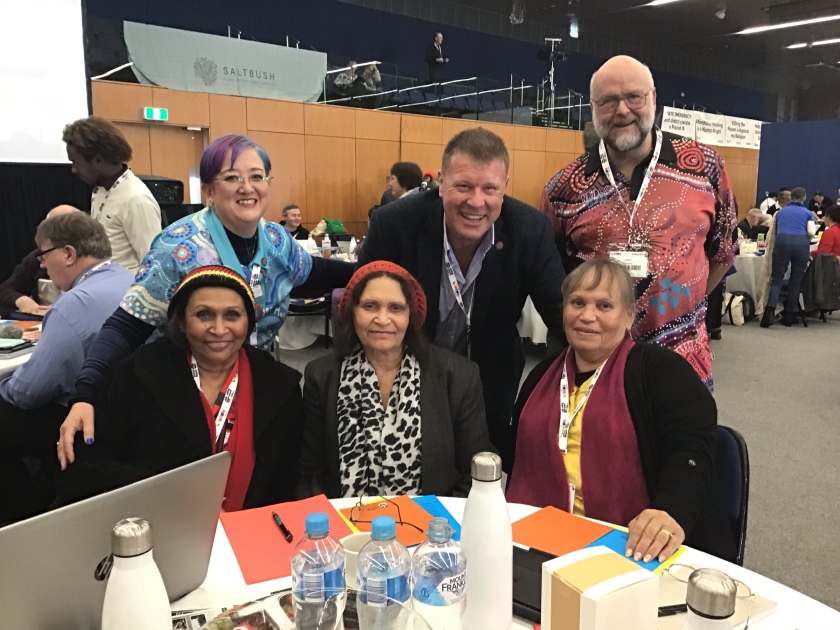