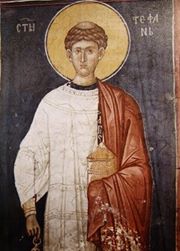 26 December is the day when the Western Church especially recognises Stephen, the person who lays claim to being the first Christian martyr. (The Eastern Church allocates 27 December for this purpose). In reflecting on Stephen, we find a richness in what Luke recounts in his second volume, the Acts of the Apostles. Here are seven things to note about Stephen.

(These reflections are adapted from sections of my commentary on Acts, published in 2003 in the Eerdmans Commentary on the Bible.)